Changes in land use and its intensity lead to alteration of biodiversity. Currently, we know the relation between land use and biodiversity and its effect on ecosystem processes and functions for some taxa. However, we have less knowledge about how diversities of different taxa are linked to each other, and whether these relationships are responsive to variation in land use.
The main objectives of the DFG SPP 1374 "Biodiversitäts-Exploratorien" programme (www.biodiversity-exploratories.de) are: i) to understand the relationship between biodiversity of different taxa and levels, ii) to understand the role of land use and management for biodiversity, and iii) to understand the role of biodiversity for ecosystem processes.
In the frame of this Programme, I study the relationship among diversities of three dominant fungal guilds, mycorrhizal, dark septate, and saprophytic fungi, at the level of mycelial biomass in the forest soil under a gradient of forest management intensity.
These fungi differ in their carbon source, and the services provided to ecosystem. Mycorrhizal fungi form symbiotic associations with tree roots, obtain the carbon from the plant and improve plant nutrient acquisition. Dark septate fungi are root endophytes relying on plant carbon, and capable to transfer nutrients to the host. Saprophytic fungi use plant and animal debris to acquire the necessary carbon driving the decomposition process. All these fungi compete for limiting soil nutrients.

This PhD project is partly financially supported by German Science Foundation in the framework of the SPP 1374 "Biodiversitäts-Exploratorien" (www.biodiversity-exploratories.de), grant PE 2256/1-1, and China Scholarship Council which has provided a stipend for Bin Song. 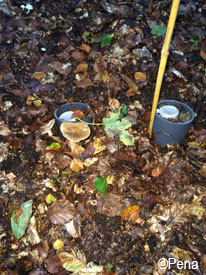