Although the growing season is slowly fading out, even now there are a few woody flowering in the Garden. Among them is the lovely cultivar Viburnum plicatum ‘Watanabe’, which is still, or again, in flower. 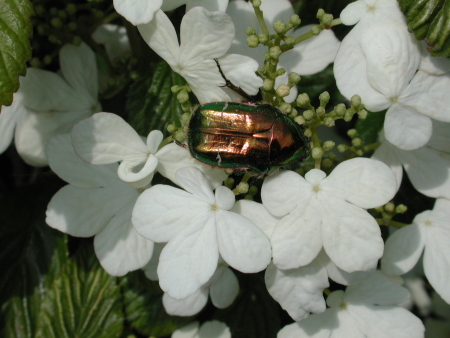 
A particularly appealing sortiment of the Garden consists of a variety of frost resistant Fuchsias, situated in sheltered positions adjacent to larger trees and shrubs. Fuchsias are represented in the Garden by the Chilean wild form, many cultivars thereof, and Fuchsia x hybrida. All of them are in full flower in October, while some of them may stop flowering not before the first strong frost events freeze their leaves and shoot tips.

In October the Bush Clover (Lespedeza thunbergii), originating from Japan and northern China, unfolds its pinkish-purple flowers, which are arranged in up to 20cm (app. 8in) long racemes.

Outspoken late-flowering plants are the indigenous Common Ivy (Hedera helix) and the Far Eastern Euonymus kiautschovica, both of which are pollinated chiefly by Flower Flies (Syrphidae). Given a supply of water most Shrubby Cinquefoil (Potentilla fruticosa) cultivars still bear shiny yellow or white flowers. 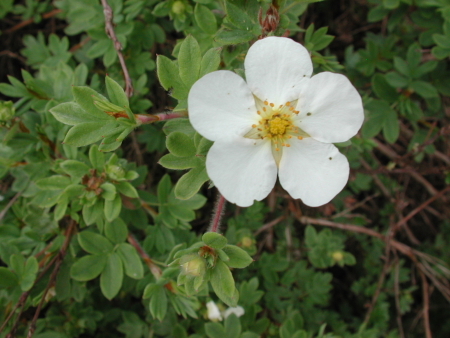 
After enjoying Apple flowers in May, we can now observe the beauty of various small-fruited species. Also countless other fruits, be it those of Cotoneaster, Mountain Ash, or Hawthorn species, compete for colour abundance with the fall foliage. The latter is particularly beautiful in North American and East Asian Maple species, Japanese Dogwood, and the Persian Ironwood Tree. Nevertheless, our native Cherry and Norway Maple also show a spectacular colouring, given sufficiently dry weather conditions in fall. 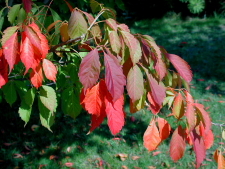 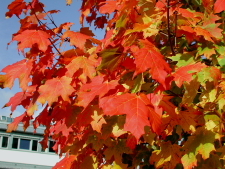 
As long as there have not occurred any frost events some perennial plants are still in flower, such as White Wood Aster (Aster divaricatus), originating from North America, as well as Bergenia and Dahlia species. Due to the final flowering of Meconopsis and Escholtzia the Garden shines like gold in the autumn sun, and the luminous red fruits of some Ephedra species decorate the shoots that widely overlap the lime-stone walls. 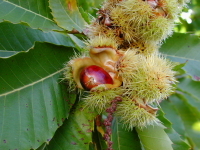