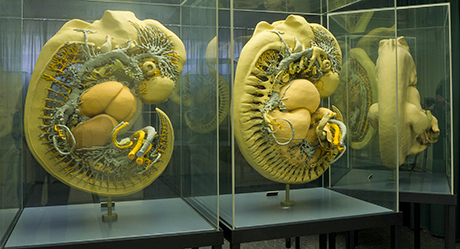 From 08/2017 to 07/2019 historian of science Dr. Michael Markert is doing research on the provenance of the more than 400 sliced human embryos and fetuses that form the central part of the so called "Human Embryology Collection ('Blechschmidt Collection')" at the Centre of Anatomy of the University of Göttingen.

These preparations on microscopic slides were the foundation of the lifeworks of Erich Blechschmidt (1904 to 1992), head of the Anatomical Institute from 1942 to 1972. Best known are the more than 60 large and overwhelmingly detailed educational models which show the stages of development of man in the first two months after fertilization. These models are part of the Centre of Anatomy’s exhibition that is currently on display and can be publicly accessed.

Blechschmidt himself never gave minute and specific information on the provenance and extraction of his specimen. At least since the 1980s, it has been assumed that he might possibly have used sources connected to Nazi crimes during his early Göttingen period from 1942 to 1945.

Purpose of the currently conducted project is to examine all relevant archival evidence to document the sliced specimens, their sourcing, integration into the collection and use for research and education. The project is funded by the Centre for Collection Development, the Centre of Anatomy and the Medical Faculty at equal parts.