Time-resolved high-energy electron diffraction experiments have unraveled ultrafast structural and electronic processes in bulk media. Ultrafast diffraction with low-energy electrons would be ideal to investigate the structural dynamics of quasi-two-dimensional systems such as ultrathin films and surfaces. However, the realization of such experiments remains demanding, due to the challenges in creating suitable electron pulses [Paarmann et al., 2012]. 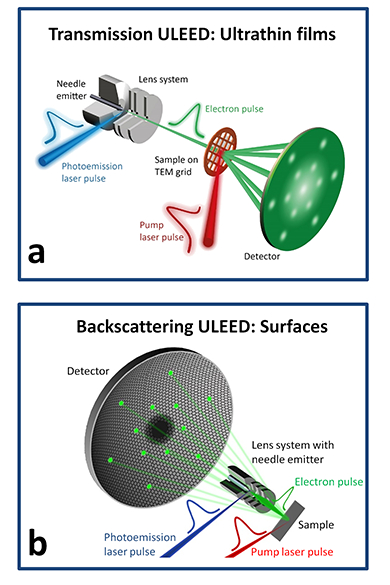 Our group is working on the development of ultrafast low-energy electron diffraction (ULEED) with first applications in transmission and reflection geometries [Gulde et al., 2014]. Low-energy electron pulses of few-picoseconds duration are generated with a laser-driven tungsten needle emitter and are employed in a laser-pump/electron probe scheme.

In a first application, we studied the structural dynamics of an ordered polymer adsorbate on free-standing graphene by ULEED in transmission [Gulde et al., 2014]. A schematic of our setup is shown in Fig. 1a. We determined the characteristic time scales of the superstructure dynamics, including the energy transfer from the graphene to the adsorbate layer, the loss of crystalline order in the polymer, and the formation of amorphous components at extended spatial frequencies.

Furthermore, we have recently extended ULEED to a backscattering geometry (see fig. 1b) by developing a miniaturized laser-driven photoelectron source. With such a pulsed electron source, we will be able to study complex electronic and structural dynamics at surfaces.