From measured temperature fluctuations of the cosmic microwave background, we know that the observable universe started from almost homogeneous and isotropic initial conditions. According to the standard model of cosmology, around 80% of all matter appears to be cold dark matter with small velocity dispersion and vanishing non-gravitational interaction. Only the remaining fifth exists in the form of known particles as described by the standard model of particle physics. While constraints on dark matter become more and more precise, its particle nature is largely known. Finding the particle or particles constituting dark matter is at the core of modern cosmology research.

Structure formation tells us how this homogeneous, initial state evolved into a state that hosts large-scale filaments (the cosmic web), galaxies, stars, planets and other structures. The present paradigm is that small initial over-densities of dark matter underwent gravitational collapse forming the cosmic web of one-dimensional filaments connecting halos which merge to increasingly massive structures. In their potential wells, baryons can accumulate, clump together and eventually form stars. The UV emission from these stars and supernova explosions at the end of their life cycle in turn have a strong impact on their environment even on super-galactic scales.

These highly non-linear dynamics require dedicated numerical simulations on high performance computing clusters. The goal is to identify and correctly model the dominant processes of structure formation and to discriminate between different dark matter candidates. Our group mainly investigates ultra-light bosonic dark matter with negligible non-gravitational interactions, so called fuzzy dark matter, and axionic dark matter.
Fuzzy dark matter (FDM) effectively models ultra-light bosons with negligible non-gravitational interactions e.g. axion-like particles generically arising in string theories. Its temporal evolution is governed by the Schroedinger equation with (self-)gravitational potential. Analogous to quantum mechanics, this results in wave like features at the corresponding de Broglie scale even though FDM is a classical field. While indistinguishable from cold dark matter (CDM) on larger scales, FDM with masses around 10^-22 eV strongly deviates from CDM within halos, where velocity dispersion results in fluctuating interference patterns with granular structure. The central granule is found to form an oscillating but stable galactic core which is the solitonic ground state solution of the Schroedinger-Poisson system.

With these simulations we were able to define important parameters for the outcome of binary solitonic core mergers. Employing them, we semi-analytically arrived at the same core to halo mass relation that was previously found in cosmological FDM simulations. We investigated tidal dispution of solitonic cores in a simplified host halo potential. A comparison with Milky Way satellites resulted in a lower bound on the FDM mass. 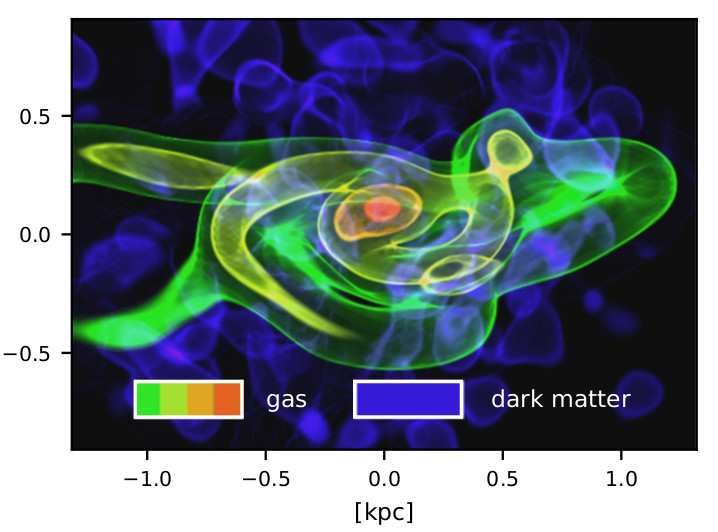 To gain insight into the characteristics of the MCs, we study their formation and evolution using a variety of methods including large cosmological N-body simulations and a combination of linear and semi-analytical formulae. Using initial conditions from the largest available early-universe simulations of the axion field, we start at an initial redshift of z=10^6 and follow the gravitational collapse of axion dark matter isocurvature perturbations into axion MCs.

Our simulations provide the first quantitative results of the mass distribution of axion MCs, the amount of axions bound in these MCs, and their radial density profiles up to redshift z=100. Our work is an essential step to predict the properties and the distribution of MCs at the present time with
extensive implications for both direct and indirect detection of axion dark matter. 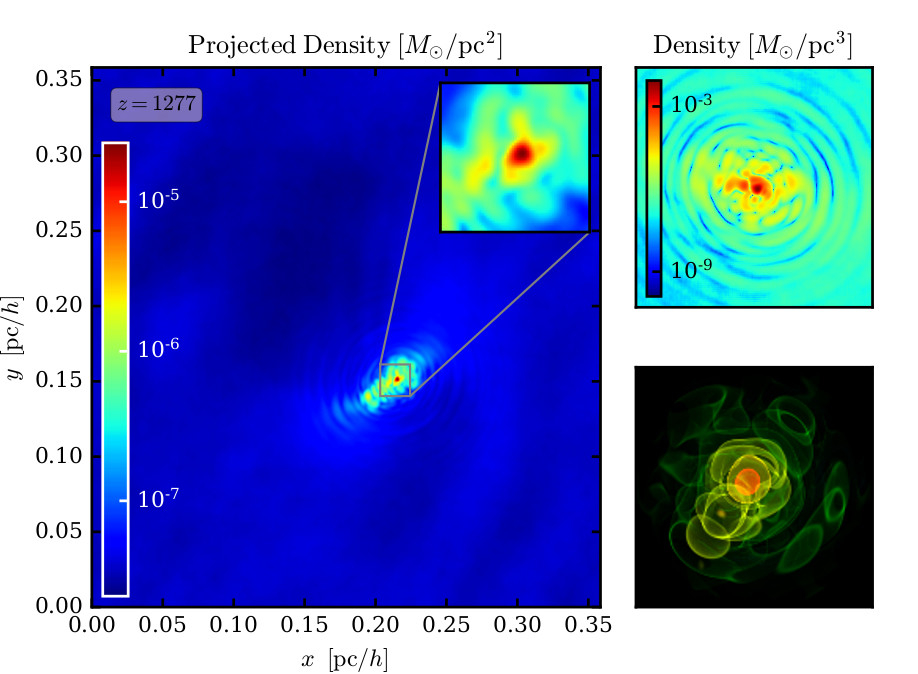 Different astrophysical observations (such as Faraday rotation and synchrotron emission data) performed over the last decades revealed the existence of the large-scale correlated magnetic fields with the strength of order of microGauss on galaxies and galaxy cluster scales. The origin of these extragalactic magnetic fields still remains unknown: it is commonly assumed that these fields are the result of amplification of initial weak seed fields either astrophysical or cosmological origins. The recent observations of blazar spectra suggest the lower bounds order of the femtoGauss for the magnetic fields in cosmic voids (at 1Mpc or higher length scales), and are in favor of the cosmological magnetogenesis possibility. The generation mechanisms of primordial magnetic seed fields are divided into broad classes, including inflationary and phase transition magnetogenesis scenarios. We study the magnetic fields of different primordial origins, follow the evolution of these seed fields till the late times of the Universe expansion and determine their dynamics during the large scale structure formation. To simulate the cosmic structure formation, we use the cosmological ENZO code. This allows us to examine the evolution of magnetic field and investigate its statistical properties at different cosmological environments, such as cosmic voids, filaments, and galaxy clusters. We use different initial conditions (in correspondence with various magnetogenesis scenarios), which are obtained through numerical magnetohydrodynamical simulations (using the PENCIL code) of primordial magnetic field evolution from the moment of the generation till the recombination epoch. We investigate observational signatures of outcome magnetic fields and give a prescription how to distinguish between the magnetic field primordial generation scenarios. 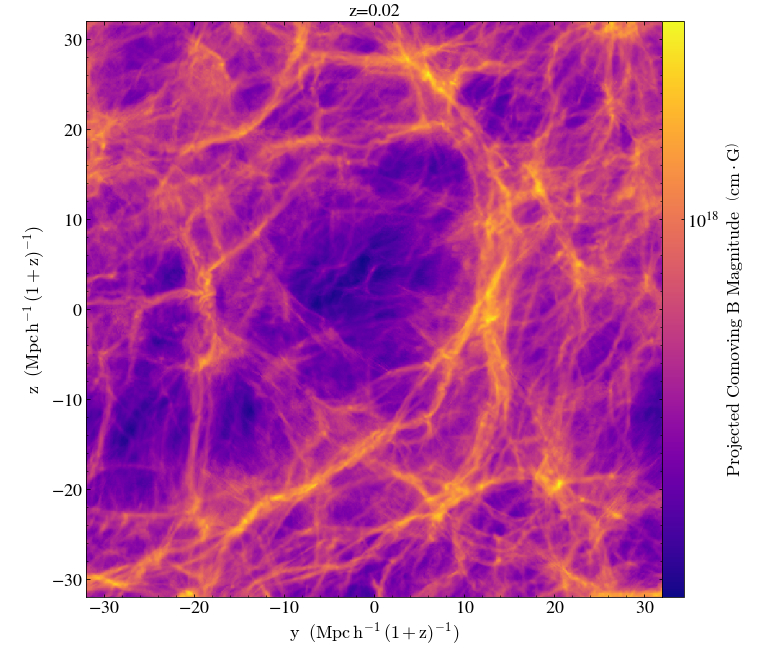 The project is supervised by J. Niemeyer and T. Kahniashvili. Collaborators: P. Dominguez-Fernandez and F. Vazza, W. Schmidt, X. Du, A. Brandenburg and P. Kapyla.
The limits of the classical field picture for axion dark matter and FDM are also of great interest to our group, and we are currently research the extent to which new extra-cassical physics can appear. We have recently found that through many-body effects, Bose dark matter can occupy states with large amounts of quantum correlation (entanglement), adding extra-classical physics to their dynamics. Preliminary N-body simulations show galaxies seeded by axion dark matter include unique, extra-classical structures that may have observable consequences for both direct and indirect axion searches. Current work includes improving and enlarging these simulations to determine the extent of these Bose structures in modern cosmology. We are also interested in how these correlations develop in the early universe, and are working to understand their evolution through a combination of semi-analytic and numerical methods. These results could have a great impact on how we model axion structure formation and on axion searches. 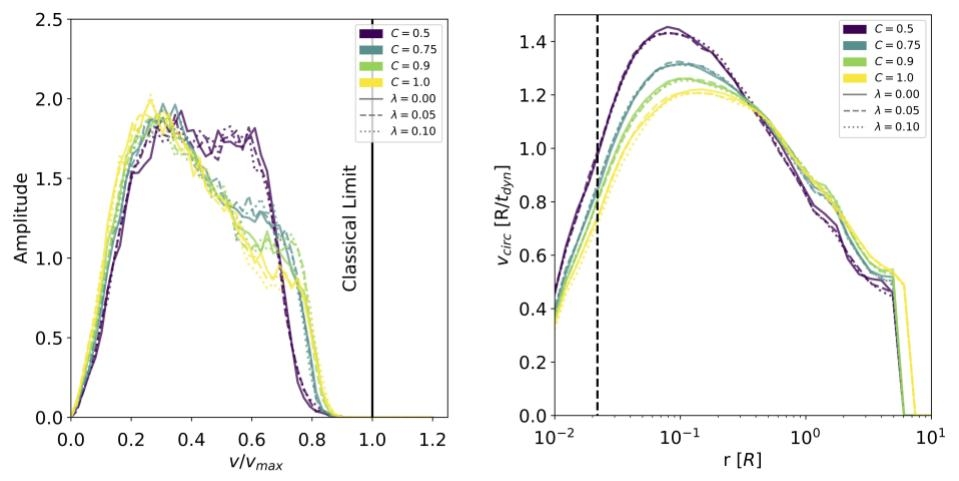 In the era of multi-messenger astronomy, computational astrophysics is confronted with the challenging task of connecting the rich observational results with the predictions and constraints coming from theoretical models. While classical n-body, hydrodynamical, or even magnetohydrodynamical simulations can yield information about the physical properties of galaxies, they typically lack a crucial ingredient for this task - the connection between these properties, like stellar masses or dust content, and the electromagnetic radiation actually escaping these systems that is observable for us.

One way of mitigating this deficiency is the application of radiation transport codes in post-processing the original simulations. We are working with public and private code for generating synthetic observations over a wide range of frequencies, from the radio regime down to the far UV. We develop and maintain the Iltis code, a fast and easily adaptable Lyman-alpha transfer code. A public version is available on github; an advanced version of the code is available on request.

With these tools at hand, we try to answer questions on scales of the interstellar-, circumgalactic-, and intergalactic medium at redshifts of 2 and beyond, e.g. 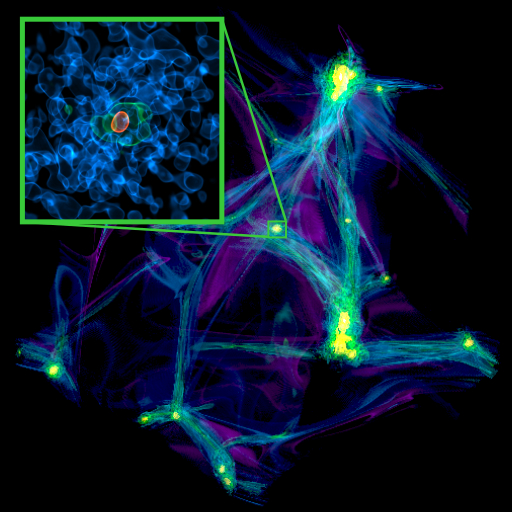