Prof. Dr. Gerald Spindler, holder of a diploma in economy, born 1960 studied Law and Economy in Frankfurt a.M., Hagen, Genf and Lausanne. He completed both State Exams.
After a period as research fellow for Prof. Dr. Mertens in Frankfurt and at the Institute for International and Foreign Law of Economy in Frankfurt he conferred a comparative law doctorate in 1993 on “Law and Consolidated Companies”. He then in 1996 finished a work named “Organisational Duties of Companies”, for which he received his PhD for Civil Law, Commercial and Economic Law, International Private Law, Comparative Law and Labour Law. After teaching as an associate professor in Bielefeld and Dresden, Gerald Spindler joined the University of Göttingen in 1997.

Apart from teaching, various books, more than 100 articles in law reviews, as well as expert legal opinions are published by Professor Spindler. He is editor of one of the most renowned German law reviews covering the whole area of cyberspace law and telecommunication law. Prof. Spindler was the national and European reporter for E-Commerce during the XVIth International Conference of the International Academy of Comparative Law in Brisbane/Australia, 2002. He also acted as a speaker at the IST-Conference of the EEC on new developments in Information Society in Nice, 2000.

Prof. Spindler has been Vice-Chairman of the German Society of Law and Information Science for several years and has also advised the German, as well as the European legislator regarding various questions concerning the information society, such as the E-Commerce-Directive or the Information Society Directive. 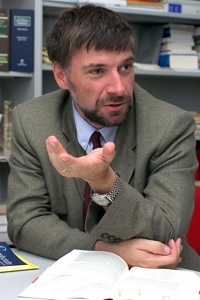