History of the collection

Johann Reinhold Forster (1729-1798) and his son Georg (1754-1794) were naturalists who accompanied James Cook on his second voyage around the world (1772-1775). In addition to animals and ethnological objects they collected a large herbarium. They were assisted by the Swedish botanist Anders Sparrmann, who joined them at the Cape of Good Hope. Already during the voyage descriptions and drawings were prepared and the new genera were published only a few months after their return in 'Characteres generum plantarum' (1775/76).

Several sets of plants were given to botanists, either in gratitude for their help in identification, as a gift, or in exchange. The rest of Georg Forster's herbarium was sold in an auction in 1797/98 and bought by Aylmer Bourke Lambert, while William Roscoe aquired the herbarium of Johann Reinhold Forster in 1799 (plants now for the greater part at K, the remaining at LIV). Thus, plants of Forster can nowadays be found in at least 18 herbaria.

The set at Göttingen seems to have been given to the university during a visit by Georg Forster in the year 1787 or at the beginning of 1788, after his return from Vilnius (Wilna) and before he went to Mayence (Mainz) as a librarian. The set was first included in the Academic Museum (Pütter mentions it as recently acquired in the second volume of his 'History of the University' 1788) and it later came to the Botanic Garden and was finally placed in the General Herbarium. The importance of the herbarium was recognized, and in 1968 F.-G. Schroeder separated it from the main herbarium; since then it is kept separately and has been studied by many visitors, notably by the late Ray Fosberg in 1986.

The sheets of the Forster herbarium in Göttingen have original schedae with two numbers. The first number pertains to this special set, running from 1 to 359. Only 327 of these have been found so far. The others may have been lost (as is certainly the case for the Myoporaceae) or may still be found under a new name in the General Herbarium. The second number is the running number from Forster's 'Florulae insularum australium prodromus' (1786). In most cases there is a smaller herbarium label in the handwriting of Friedrich Gottlieb Bartling (1798-1875) who did a large amount of work in the herbarium after the official founding of the university herbarium in 1832. There are no collecting numbers in the modern sense in any of the Forster herbaria. In an appendix there are few additional specimens not belonging to the series mentioned above. They seem mostly to have been acquired with the herbarium of Georg Friedrich Wilhelm Meyer (1782-1856).

In several publications the question was raised as to the location of the types of the new species published by the Forsters. Some authors have stated that those of the 'Characteres' are in London in the Banks collection, while the types of the 'Prodromus' are at Göttingen. This question can certainly not be solved in a general manner. A holotype is the specimen used for the description of a new taxon. It is possible that some of the species were described on the basis of one specimen, but this is surely an exception. Thus, there are nearly always several syntypes and a lectotype has to be selected. The Forsters of course did not have the concept of type as we do these days, but they knew of the value of the original material. For the selection of a lectotype for the species described in the 'Characteres' the plants at the BM are surely good candidates; but the specimens given to other botanists or kept by the Forsters are equal if clearly authorized by one of them. Because the 'Prodromus' was written in Wilna by Georg Forster alone, I think lectotypes should be chosen either from material at Göttingen (GOET) or from the set sold after his death, which can now be found at the BM. If the schedae have the Prodromus number with the name in the same handwriting this is a good indication that they were in Forster's possession while he was preparing this work. 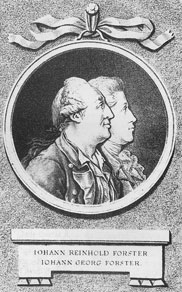