Origins in Hannoversch Münden (1870 - 1970)
The history of the Forest Botanical Garden in Göttingen is closely linked with the history of the Faculty of Forest Sciences starting in Hannoversch Münden (Lower Saxony), a small town about 25km from Göttingen.
Under the direction of master gardener ZABEL (1828-1912) the Forest Botanical Garden in Hannoversch Münden was established in 1870, two years after the 'Forestry School Münden' (Forstschule Münden) had been transformed into the “Prussian Royal Forest Academy” (Königlich Preußische Forstakademie). The motivation was to provide teaching materials for the students of forestry, allow for breeding experiments and other research. In particular, ZABEL excessively used the facilities for plant breeding during his tenure (1870-1895) and thereafter, creating a host of new plant breeds.

Under the direction of his successor, VON POSER, large parts of the garden fell into disrepair. In 1930 VON POSER was followed by LAUE, who had the difficult task of re-ordering and rebuilding the garden. In 1962 the horticultural engineer BÄRTELS became the garden’s new Director of Operations. 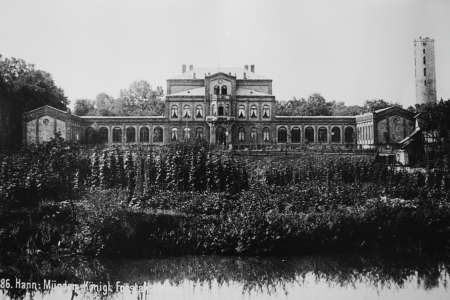 Historical view of the main building of the “Prussian Royal Forest Academy” in Hann. Münden

Relocation to Göttingen (1970 - 1980)
In 1970/71 the research and teaching institutions of forestry in Hannoversch Münden were relocated to Göttingen, thereby facilitating scientific transfer among forest sciences and other disciplines. Since the long-established 'Old Botanical Garden' (Alter Botanischer Garten) of Göttingen did not meet the demands of Faculty of Forest Sciences and Forest Ecology, a new Forest Botanical Garden had to be established.

The southwestern slope of the Fassberg hill (about 280m/ 910ft a.s.l.), situated in the northeastern part of Göttingen and adjacent to the institutions of the Faculty of Forestry and Forest Ecology, was a location available for the future Forest Botanical Garden. Wind exposition had to be mitigated by means of extensive windbreak plantations along the road to Nikolausberg, consisting of native tree and shrub species. In 1973, not before the completion of prolonged groundwork operations, the first woody plants were planted, some of which had been grown in Hannoversch Münden specifically for that purpose.

Despite huge commitment of Prof. SCHMUCKER (retired in 1963) and Prof. LANGE (resigning in 1967 for a position in Würzburg) proceedings on the establishment of the Forest Botanical Garden proved unsatisfactory with regard to location and extent as well as technical equipment and personnel.
Succeeding LANGE, Prof. ESCHRICH was the director until 1981. In addition to the area of the Forest Botanical Garden, extensive planning included the largest part of green area of the Northern Campus, where the Arboretum was being established, containing collections from North America, Japan, Korea and China and with plants organized into geographic regions. Since BÄRTELS initiated planting in the Japan section in the fall of 1970, the expansion of all woody-plant collections within the so-called ‘Plant Geographic Arboretum’ has continued. 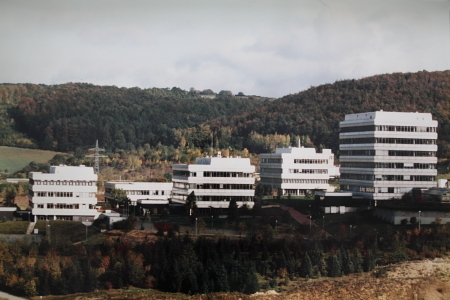 Recent developments (1980 - today)
While the focus of the plant collection was on wild forms during the early years, from about 1980 onwards BÄRTELS increasingly planted cultivated forms. Since 1982, when under direction of Prof. BARTELS the Forest Botanical Garden was separated from the Institute of Forest Botany, the garden has been an independent institution within the faculty, whose director is nominated by the president of the University of Göttingen. After Prof. BARTELS had retired in 1989, Prof. HÜTTERMANN acted as garden director until 1990. He was succeeded by Prof. ROLOFF until 1993, when Prof. HÜTTERMANN became garden director for another four years. Since 1997 Prof. POLLE, succeeding Prof. ESCHRICH, has been Scientific Director of the Forest Botanical Garden and Arboretum.
The director of operations BÄRTELS retired in 1992, and was followed by graduate engineer MENG in 1993. Under the direction of Prof. POLLE und MENG the Forest Botanical Garden has been expanded considerably. It is of utmost concern to the garden direction to popularise this unique plant collection and to keep to this heritage of a living collection for the next generation.