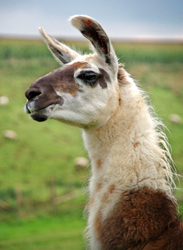 Endothermic animals have to keep their body temperature within a narrow limit with changing environmental conditions. However, this comes at a high energetic cost. Nevertheless, there are indications that some ungulates can exhibit some form of an energy saving mechanism when ambient temperatures are low and/or food availability is scarce. This phenomenon has been shown for large ungulates such as roe deer, red deer and for the wild ancestor of the horse, the Przewalski horse. There are speculations that livestock species lost the ability to reduce their energy expenditure under food shortages and/or adverse environmental conditions, since they were housed and selected under constant nutrient supply without selection pressure for maintaining a seasonal, cyclic adaptation. However, empirical confirmation of a supposedly lower adaptability of livestock species compared to their wild counterparts is still missing. Furthermore, it is still unknown to what extend such seasonal adjustments with regard to energy allocation are present in extensively kept livestock species. In that regard the llama is particularly well suited as a model animal since it represents one of the most robust domestic animal breeds which, after the domestication model, can be referred to as a primary population. Therefore, the aim of the study is to determine if the llama, one of the most extensively kept livestock breeds, exhibits seasonal adjustment mechanisms in terms of energy expenditure and locomotion under Central European and high altitude Andean climatic conditions. The proposed study is the first in a mammal that combines the doubly labelled water method for measuring energy expenditure with a telemetry system measuring locomotion and body temperature, as well as determining the distances covered by a GPS. In combination these data will give a very detailed picture about the interaction between energy expenditure and energy savings in an animal.

Lea Brinkmann
Seasonal adjustment of the metoblism in horses: 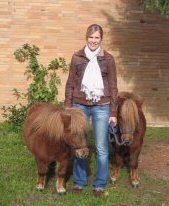 In this study the metabolism of miniture Shetland ponies will be investigated over the year. We will employ the doubly labelled water method and measure the heart beat frequency and subcutaneous temperature. The doubly labelled water method is based on the dilution of the applied stable hydrogen (deuterium) and oxygen (18O) isotopes and their different exrection rates. Deuterium and 18O both leave the body through water losses such as urine, sweat etc. However, the oxygen isotope is also excreted via CO2. The difference between the two washout rates of the isotopes is a measure of energy expenditure. Special attention will be given to the adaptation of the metabolism to low temperatures and changing photoperiod. 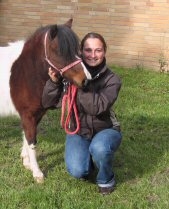 This research project deals with the learning ability of horses, in this case of miniture Shetland ponies. The animals are learning discrimination tasks by dint of a computer supported learning apparatus. Here we analyse the learning behaviour, the learning rate and possible influences on the learning performance. With these findings we want to enhance experimental designs and optimize training methods for practical use. 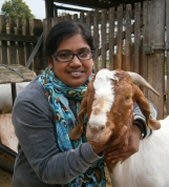 The salinisation of soils and ground water due to climate change is a worldwide increasing phenomenon.This study investigates the tolerance of sheep and goats for sodium chloride in the drinking water. A two choice preference test technique was designed as the principal method. In addition, physiological parameters will be evaluated. 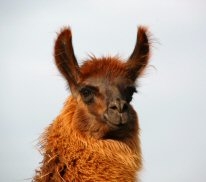