The Logistics of Moving a Library

In 1984, the departmental library contained approximately 43,000 volumes and was spread over three different places: the main departmental building in Nikolausberger Weg 15, where the literature staff and the lectors sat, and the different rooms of the 7b annexe where the Medieval Studies and the Linguistics sections were housed. There was no direct connection between the two buildings, at least not for people without a key to the connecting doors. To save students and staff alike from having to cross over to the main building every time they had to look up classmarks, the card catalogue had been duplicated. Because of the split, the Department had six library assistants in their employ, to keep an eye on all the library rooms.
In the new building of Jacob-Grimm-Haus, the library had only one central entrance, so the number of library assistants could be reduced over the years. The books, however, had to be kept in two different locations again; in the main wing of the building, which also housed (and still houses) the Linguistics section, the Main Office and some of the staff members' offices, and in the side wing, where the majority of books were to be shelved in the old high-ceilinged main ward.
So, how do you move 43,000 volumes to their new home without losing any of them or mixing up boxes? How do you ensure there is enough room for books to be bought in days to come? "It was quite simple, actually", says our former librarian Klaus Herrgen. "We packed the books up, numbered the boxes, and a removal company came and ferried them to the new building where they were unpacked in the right rooms."

To make sure that this would work out without any hitches and leftover volumes, quite some thinking and planning had to be carried out. Shelves were measured, and the total number of shelf metres computed per section. Based on the average numbers of books purchased by the various professors, additional metres were added to have spare room for the years to come. The walls in the future library rooms were measured, and it was decided how to arrange the racks so that the books could be adequately shelved. As the manuscript notes show, this involved quite a lot of thinking and planning.


Only then did it make sense to pack the books up and number the boxes to have them carried over. In their new homes, templates were used to ensure the books were shelved with room to spare: 20 centimetres of cardboard were placed on the end each of the shelves and the rest of the shelves were then filled with books. "It worked out fine, on the whole", Klaus Herrgen remembers. "Only occasionally did we have to adjust things a little, when, for example, volume twenty of a twenty-volume collection of books would go onto the next shelf – we'd then redistribute the books somewhat differently, and in each of the sections we had enough space for additional volumes."


It was not just the books that had to be considered, though. A library also needs desks for workplaces, space for computers or other electronic devices (microfilm and microfiche readers, in 1984), enough room to put up ladders so that the top shelves may easily be accessed. Add to this that, in 1984, there was no internet portal that would allow users to read texts online, and photocopying was not available to students, the number of students that had to be accommodated in the library for reading and taking manuscript notes was considerable. Consequently, so was the number of tables and workspaces needed.

All this had to be taken into account, and the library files show that the best-laid plans of mice and librarians 'gang aft agley' and did not always work out as expected. Just to mention two examples: shortly before everything was ready to be boxed up, Health and Safety officials noticed that the tall new shelves in the former main ward were unsafe - with up to 4 metres in height they were simply too high and had to be fixed and stabilized before anyone could use them. Shortly after the move, 200 additional bookends had to be ordered because the original calculation had been wrong.
Today, in 2019, the library hosts some 68,500 volumes, nearly half again of what had to be boxed up in 1984. The interest in hard copies, as opposed to digitized books, seems to be unbroken - students and staff in the Geisteswissenschaften are happy with books. The library also contains journals (in decreasing numbers), microfilms and microfiches, as in 1984, but it is not all old and outdated. The current librarian Alexandra Rehfeld also looks after ebooks, DVDs, CDs and the occasional software medium. The card catalogues still exist, though few students and staff ever use them; OPAC, the computer-based Open Public Access Catalogue, offers more options for retrieving information not only on the books on the shelves but also from Göttingen-based, national and international databases. As the means for research evolve so does the library: Today the once quiet workspaces are filled with lively discussions by work groups and the "No Mobiles" signs have been exchanged for area-wide Wi-Fi to allow easy internet access with smartphones and computers. 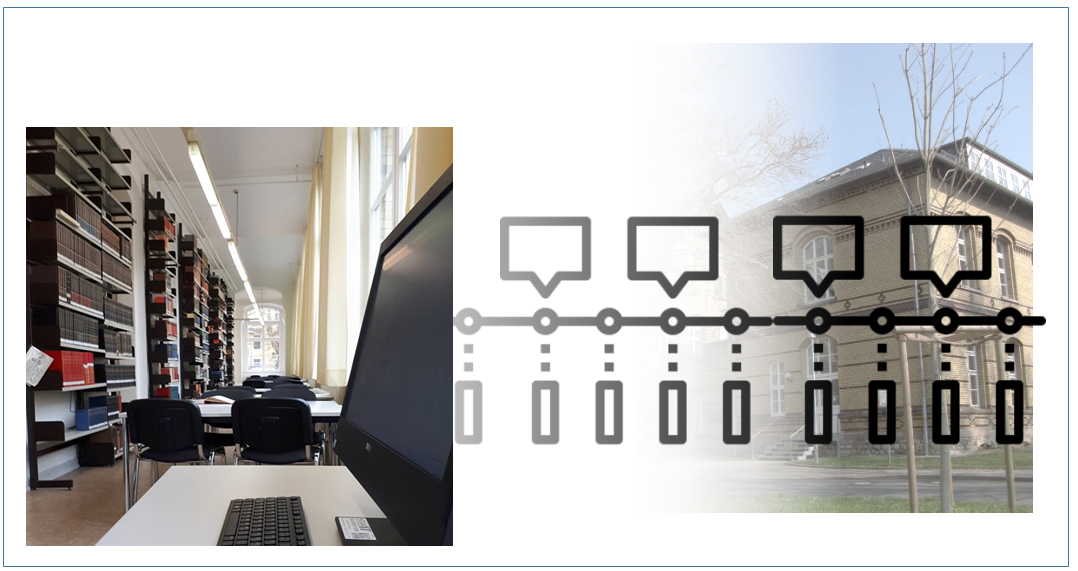 Timeline icon made by iconixar from www.flaticon.com.