The direct imaging of microscopic structural changes on ultrafast timescales is a particular challenge in the natural sciences. Alongside ultrafast X-ray techniques, time-resolved electron microscopy, diffraction and spectroscopy will yield unprecedented insights into rapid physical, chemical and biological processes. We follow a variety of imaging approaches with ultrashort, highly coherent electron pulses to investigate the dynamics of ultrafast electronic and structural phenomena. 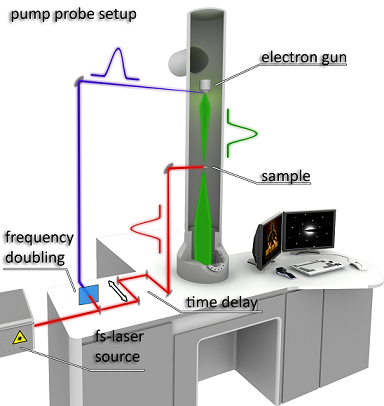 Over the past few years, our research group has developed a novel implementation of Ultrafast Transmission Electron Microscopy ("UTEM"). The instrument employs a "pump-probe" scheme, in which two laser pulses are coupled into the column of a transmission electron microscope (TEM) (see image on the left): A first laser pulse excites an electronic or structural change in the investigated sample (red beam). In a special photocathode, a second, delayed laser pulse (blue beam) generates an ultrafast electron pulse (green), which then probes the induced sample change in microscopy, diffraction or spectroscopy. By varying the relative pulse delay, the dynamics can be followed in time.

Our ultrafast TEM is the first in Germany, and it is the first time-resolved TEM worldwide that uses the localized photoemission from a field-emission tip to create an extremely high laser-triggered electron beam quality (see image below).

Background on the development of ultrafast electron microscopy in Göttingen

Time-resolved electron microscopy with laser excitation was initially pursued by Prof. O. Bostanjoglo (TU Berlin) in the 1980s. By overcoming experimental difficulties and using advancements in laser technology, the group of nobel laureate A. H. Zewail (Caltech) has made significant progress in the technique since about 2005. In parallel, researchers at Lawrence Livermore National Laboratory (LLNL) carried out developments of a single-shot TEM. Presently, a variety of projects in Europe and around the world are focusing on the implementation and application of ultrafast transmission electron microscopy. 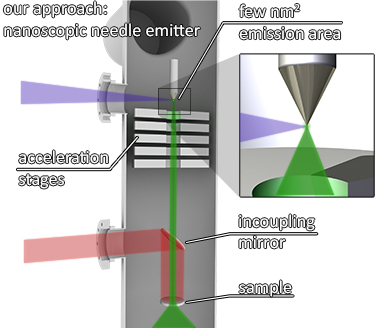 In Göttingen, we initiated work towards ultrafast TEM in 2009, motivated by our research on ultrafast photoemission from field emitter tips. We are convinced that the power and analytical capability of the technique will drastically grow by using nanoscale electron sources. Based on this concept, in 2011, we received funding from the Deutsche Forschungsgemeinschaft (DFG) and the "Niedersächsisches Vorab" (VolkswagenFoundation) for a transmission electron microscope and a femtosecond laser system (Principal Investigator: C. Ropers. Co-P.I.s: C. Jooß, M. Münzenberg, K. Samwer, M. Seibt, C. Volkert). After the preparation of suitable laboratory space in the Physics Faculty, the instruments were installed in 2012 and 2013 (TEM: JEOL-2100F; Laser: Coherent-RegA), and we began with the necessary modifications of the TEM.

Since 2013, the development of our UTEM is funded by the DFG within Collaborative Research Center 1073 "Atomic Scale Control of Energy Conversion" (in particular UTEM-project A05; PIs: C. Ropers, S. Schäfer). In 2014, we realized successful pulsed operation of the TEM and initiated time-resolved studies on a variety of systems and in different configurations. Presently, we are investigating quantum coherent interactions of free electrons with optical near-fields, optically induced magnetization dynamics and the dynamics of structural and electronic phase transitions.