In the geodynamics and geofluids modelling laboratory (GGM), we tackle a range of different problems relating to the earth’s surface and subsurface evolution, including crustal deformation, topographic evolution, hydrogeological and temperature responses to tectonics and other forcings and the advanced use of thermochronology in tectonic and groundwater models.

Our lab uses both commercially available software as well as in house codes and solutions. We use a set of 4 multi-core desktop servers that run linux and windows operating systems. For an overview of the available hardware and model software and access to these machines for your own modelling projects, please see here

We highlight a couple of main research interests here:

Balanced cross sections are geological profiles constructed according to certain geometric conservation rules (line lengths of bedding surfaces, total area of layers) between the deformed (present day) and undeformed (i.e. beds layed out flat, folds “ironed” out, and fault displacement removed) states. Hence, where geologists have often little or no information, in the subsurface, they “fill in the gap” with these rules, and assume the geometric consistency of the section makes it a reasonable guess (likely better at least than one not conforming to the same rules).

With the huge advances in computing, it is now possible to simulate the evolution of a geological cross section, and hence, the entire geohistory contained within it, using forward mechanical models. It is then interesting to see how, starting with the undeformed state given by a balanced section, the mechanical model evolves when the total amount of shortening from the section is applied to it. The core of our model is a discrete element code (PFC5, Itasca consultants) which models solids as an aggregate of large numbers of “grains” with specific elastic and frictional properties.

Here at GGM, we have developed codes and methods to include the effects of erosion and development of topography along the section. We can then vary a number of boundary conditions (e.g. basal friction, overall geometry, material parameters of layers, number of layers and erosion history) to and test for optimal fit between a forward mechanical model and an actual balanced section (Hindle and Kley, 2016a) We are now working on a more advanced system for correlating model results with final state cross sections, giving a numerical, error estimate (Hindle and Kley, 2016b) 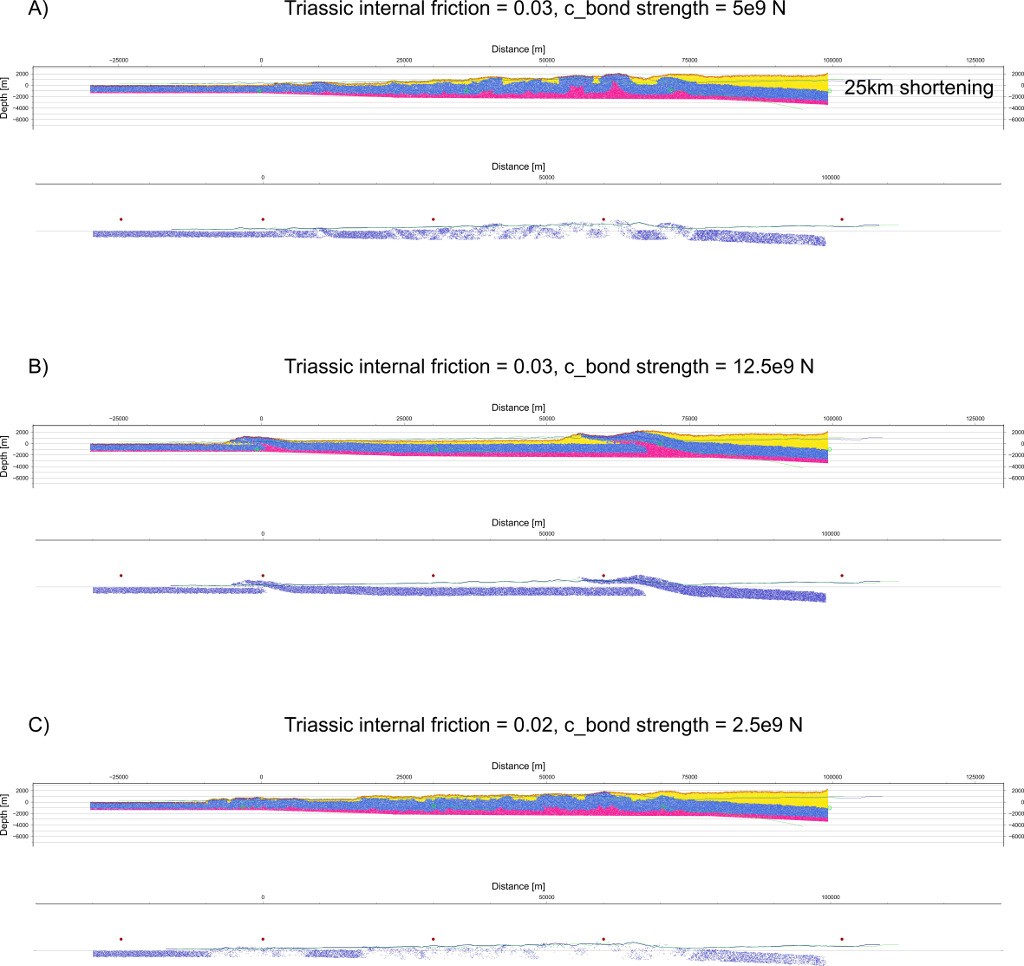 2) Quantifying the thermal and exhumation history of sedimentary basins

We use a new code PyBasin to simulate burial and thermal history of 1D (borehole) sections in sedimentary basins to see how much information we can extract on the thermal and geological history of these basins from low-temperature thermochronology (apatite fission track and (U-Th)/He data) and vitrinite reflectance data. Initial model experiments to quantify intraplate deformation and exhumation of a basin in the southern Netherlands have been published in Luijendijk et al. (2011). The code has since been parallelized and can be used to run large (10,000-100,000) model runs automatically to explore parameter space or to model thermal history at large spatial scales. We use this currently to quantify the still enigmatic exhumation histories of the Molasse Basin (von Hagke et al., 2015) and a large part of the European plate (in preparation).

We use an in-house developed parallel model code (Grompy) to simulate groundwater flow in a large series of 2D cross sections that cover the variability of groundwater flow systems globally. An application of this method to quantify groundwater flux to the oceans at a global scale is currently in review.