Programme description
The rich diversity of antiquity in one course of studies – Ancient Cultures
The Ancient Cultures Bachelor's degree programme is offered by CORO (Centrum Orbis Orientalis et Occidentalis) at the University of Göttingen.
The topics covered by the programme are the ancient cultures of Europe (especially the Mediterranean area and its surroundings), e.g. prehistoric and early Europe, ancient Greece, the Roman Empire, Syria and Palestine, Mesopotamia and Egypt.
The objective of these studies is, on the one hand, enrolment into a suitable Master's degree programme and preparation for an academic career in the field of classical studies. On the other hand, it is possible to enter non-academic fields of work (e.g. museums, libraries, publishing houses, newspapers, radio and television companies, new media, knowledge and culture management, travel companies, the book and art trades or further education).

Programme structure and contents
Ancient Cultures is offered at Göttingen as a single-subject Bachelor's degree programme. A focus will be selected for the core subject studies. Possible foci are currently:
Ancient Oriental Studies, Egyptology, Coptic Studies, Prehistory and Early History, Ancient History, Classical Archaeology, Greek Philology, Latin Philology, Late Antique or Christian Orient.
In addition, the areas of Cultural History, Archaeology, History and Text Analysis/Philology are each represented by at least one module.
Furthermore, students complete an area of professionalisation in which subject-specific knowledge and languages, as well as general key competencies, are imparted to them and elaborated upon.
In addition to the individual module examinations, a component of the final examination is the Bachelor's thesis in the selected focus.
In the Ancient Cultures degree, a particularly large range of courses exists with many options:
Over 130 modules consisting of around 200 courses from the varied fields of classical studies can be selected. Amongst these are languages such as Egyptian with hieroglyphics, Akkadian and Sumerian with cuneiform script, Aramaic, Greek, Hebrew (plus Modern Hebrew), Latin, Syriac and Ugaritic.
In addition, there are numerous courses concerning societies, cultures and religions of the ancient world along with their literary works, archaeological legacy and much more. In these courses, essential methods will be imparted for the investigation of historical societies in the areas of archaeology and philology, language, history, literature and cultural studies in all their variety and relationships.

Academic situation for a course of studies in Ancient Cultures at Göttingen
The University of Göttingen has a long tradition in the investigation of antiquity: As early as the 18th century, famous classical scholars such as Christian Gottlob Heyne (1729-1812) and Johann David Michaelis (1717-1791) taught here.
In 1867, the University of Göttingen awarded the third ever Egyptology professorship worldwide, after Paris and Berlin, to Heinrich Brugsch (1827-1894). Deciphering Mesopotamian cuneiform script, thanks to the work of Georg Friedrich Grotefends (1775-1853), also began in Göttingen.
Collections of artefacts and plaster casts were housed early in the Archaeological Institute and in the Department of Prehistory and Early History. These collections are of great importance to studies and research right up to the present day.
On account of this 250 year-old tradition, the investigation of antiquity in Europe, the Near East and Middle East is very well represented at Göttingen in the various institutes and departments. Furthermore, extraordinary facilities are available all across the university. These include the Göttingen State and University Library. There are also departmental libraries, which will in the future be combined in the Centre for Cultural Studies. Together, these provide comprehensive research literature.
In addition, numerous academic projects exist in the subjects concerned, which allow the embedding of teaching into research in various ways.

Language skills/Prerequisites
In general, knowledge of English and French is recommended. Recommended prerequisites are dependent on the focus in question, as well as the language skills acquired during studies. The requirements of each study focus can be found in the study regulations of the Ancient Cultures degree programme or from each individual focus (see links). 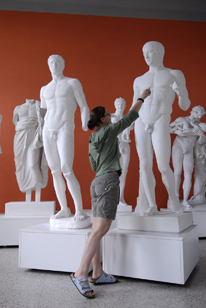 Office hours: by appointment (please use this contact form)