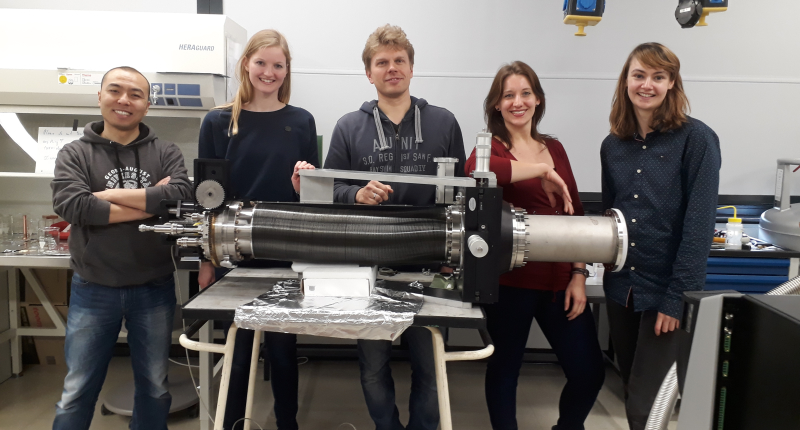 Atom beams scattering from surfaces is, in principle, one of the simplest phenomenon one can study in the field of Dynamics at Surfaces. Of all the atoms of the periodic table, of course Hydrogen atom is the simplest. It is for this reason that H-atom surface scattering - the simplest of the simplest - is particularly attractive to make detailed comparisons between high level experiments and first principles theories. This simplicity reveals itself in the fact that - as long as the atom does not change its electronic state - the collision with the surface only exchanges atomic translational energy with phononic and electronic degrees of freedom of the surface. 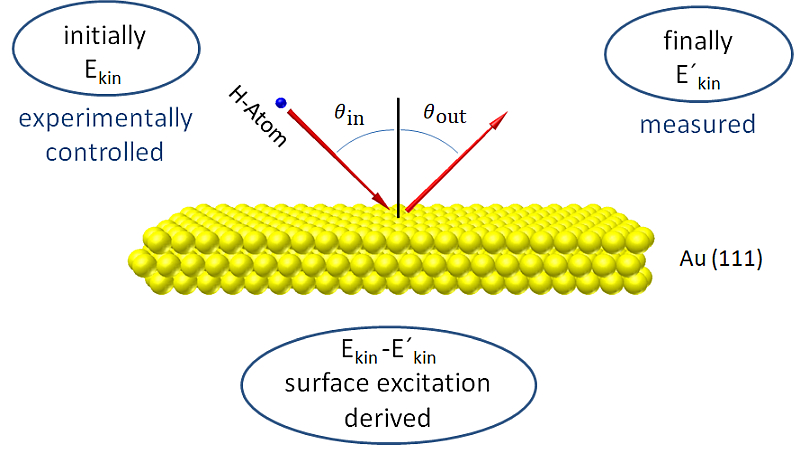 
We have designed a ground breaking new experimental apparatus where H-atoms are produced by photodissociation (HI + hν → H + I) of a diatomic molecule pre-cooled in a molecular beam expansion. This allows us to control the translational energy of H-atoms between, Ei= 0.5 and 7 eV, and to produce H-atoms with extremely narrow initial translational energy distributions, &#916Ei < 0.01 eV. This is combined with the well know Rydberg atom tagging (RAT) method, which can read the final translational energy of the H-atom after collision with the surface with a similar energy precision and accuracy. This instrument is equipped with a 6-axis sample manipulator that is designed to control the temperature of the target crystal from 10K to 1500K. The detector used in the Rydberg atom tagging is rotatable around two rotation axes, allowing us to readily investigate in-plane and out-of-plane scattering.


The high adsorption probability of atomic hydrogen on metal surfaces puzzled scientist for a long time. For an atom to adsorb to a surface, its translational energy and the binding energy have to be transferred to the solid. However, the H-atoms low mass limits energy transfer to the lattice vibrations of the surface. We could show that a large amount of translational energy is transferred to electronic excitations of the solid, explaining the high adsorption probabilities. We work in close collaboration with colleagues from theoretical chemistry who in parallel develope a theoretical model to describe H–atom interaction with metal surfaces. The model can only reproduce the experimental observations when electronic excitations and all nuclear degrees of freedom are included, supporting the interpretation of the experimental results.

So far, we studied various fcc (111) metal surfaces in an incidence energy range of ~1-3 eV. In the future, we intend to extend our studies in three directions:
We want to go to higher incidence energies that exceed the work function of the metals. New energy transfer processes involving electron transfer or emission may become possible.
We want to go to low surface temperatures. The theoretical model predicts that the structureless spectra we observe at room temperature evolve to separate peaks each corresponding to a certain scattering event at temperatures below 100K.
We want to extend the studies to different surface cuts and more metals; for example, bcc metals like tungsten or Ag(100) and Ag(110) surfaces .


Nowadays, new materials having unique properties that can be tailored by structure, composition, temperature and external fields can be synthesized using a large variety of methods. Such materials may have the potential to influence energy transfer processes on their surfaces and for example allow control over surface reactions. To identify the potential of this materials, we want to perform fundamental studies of the energy exchange on such surfaces.
We are interested in various classes of materials: thin film materials that have tunable electronic and photonic states, solids that show strong electron phonon coupling, and materials showing metal insulator phase transitions. The samples are either provided by colleges of the SFB 1073 or are synthesized in-situ in our apparatus.


When the open-shell H-atom, the simplest example of a free-radical, collides with an unsaturated molecule it is possible that electronic re-hybridization occurs and a transient chemical bond will form. The bond energy being released creates an addition complex with enormous energy initially localized in the newly formed bond. This transient bond is intrinsically unstable with respect to re-dissociation; but energy flow from the newly formed bond to the rest of the molecule can delay re-dissociation or lead to adsorption.
H-atom scattering from graphene is an ideal model system in this context. For a C-H-bond to be formed, the delocalized electronic structure of graphene has to be locally destroyed, giving rise to an adsorption barrier. For low incidence energies, the H-atom is reflected from the barrier, for energies exceeding the barrier, a transient C-H bond is formed. In experiment, we observed that both cases lead to very different scattering distributions, enabling us to follow the C-H bond formation and the energy flow from the bond to the graphene layer. 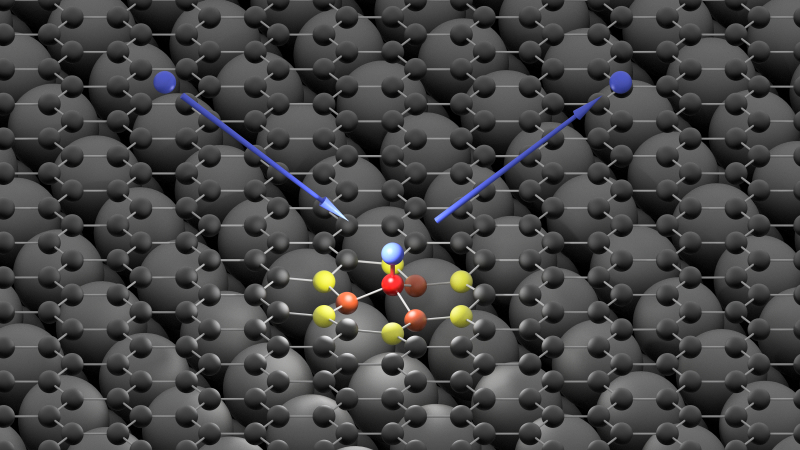 A hydrogen atom (blue) collides with a graphene surface. For sufficient incidence energy an ultrashort lived (~10 fs), transient bond with one carbon atom (red) can be formed. Neighboring carbon atoms (orange and yellow) take up a large amount of energy, before the H atom leaves again. 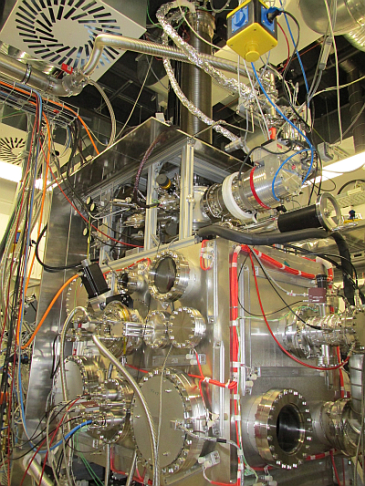