Physics of the Sun and Heliosphere

The Sun is the prime source of energy in our solar system and enables life on Earth. Besides the visible light, the Sun’s outer atmosphere, the solar corona, is the source of a fully ionized flow of hydrogen and helium atoms and associated free electrons, continuously expanding into space. This flow, referred to as the solar wind, reaches to distances from the Sun larger than 100 astronomical units. The region in interstellar space occupied by the solar wind is termed the heliosphere. The solar wind carries the Sun’s magnetic field into space and impacts the planets and comets of the solar system. Research on the plasma physical processes in the heliosphere caused by the variable magnetic field of the Sun is of key importance for understanding better the Sun and its influences on Earth and for astrophysical processes in the Universe in general. 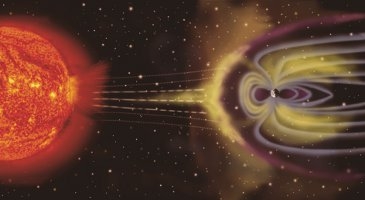 As a consequence of the Sun’s variable magnetic field, the solar corona is highly dynamic. The most transient energetic phenomena of the Sun are sporadic emissions of electromagnetic radiation at X-ray and ultraviolet and sometimes even y-ray wavelengths, causing short-time ionization increases of the Earth’s upper atmosphere, the ionosphere. Even more dramatic are the impacts of strong gusts of solar wind on the Earth’s magnetosphere caused by intense eruptions of coronal matter. The fastest coronal mass ejections (CMEs) move at speeds of about 3000 km/s and reach the Earth within less than a day at a distance of 150 million kilometers. Besides producing colorful polar lights they can lead to a wide variety of unwanted effects, such as disturbances of radio traffic, satellite navigation and communication, corrosion of oil pipelines and sometimes electric power outages. CMEs are to date known to be the key sources of space storms and space weather effects. 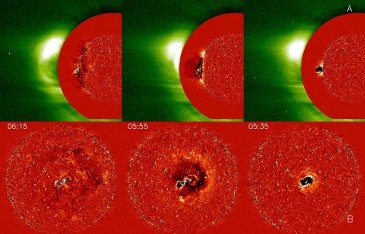 Observation of a CME in the solar corona (A) and of the associated solar tsunami at EUV wavelengths (B). The simultaneous observations from two different perspectives in space are from the two satellites of the NASA STEREO mission. Courtesy: Volker Bothmer and Giuseppe Nisticó, University of Göttingen.

The research group has been directly involved in the planning and design of space missions and instruments currently in operation, such as STEREO. The experiences facilitate leading edge analysis of state of the art measurements of the Sun and heliosphere. Direct involvement in past and present solar and heliospheric physics from space includes the missions Helios, Ulysses, SOHO, STEREO, SDO, ACE and Proba2 and NASA’s upcoming Solar Probe Plus mission, mankind’s first visit of a star. 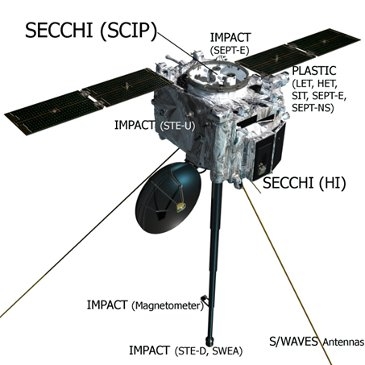 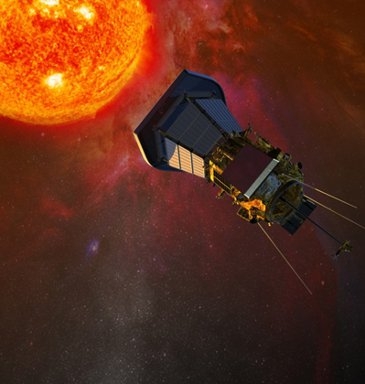 Schematic diagrams of one of the space probes of the NASA STEREO (top) and Solar Probe Plus (bottom) missions. The STEREO mission consists of two almost identical satellites. Shown are details of the scientific payload including the SECCHI telescope suite. Courtesy: NASA.