Postdoctoral research fellow in the Additive Manufacturing and 3D Printing Research Group at the University of Nottingham, UK

Employment:
In August 2004, during my undergraduate, I decided to open my own café, in which I also worked as a waitress. From July 2007 I was combining my job at the café with my PhD. In February 2011 I got pregnant, so I decided to close the café, what I did in June. In September the same year I got my doctorate degree. From October 2011 to May 2012 I was on maternity leave. From June 2012 to March 2014, I joined my former group as a Postdoctoral Researcher, working in the synthesis of new polyurethanes derived from sugars for biomedical applications. In April 2014 I moved to Nottingham (UK) as a Research Fellow in the 3D Printing and Additive Manufacturing Research Group, based at the University of Nottingham, where I still find myself. 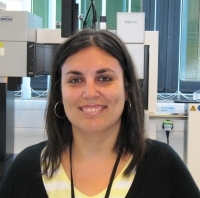