Christel Fenge studied biochemistry at Leibniz Universität Hannover. She earned her doctorate at the Institut für Technische Chemie.
She held various positions in the areas of both Research & Development and Product Management at B. Braun Biotech International, the fermenter manufacturer in Melsungen which is now part of Sartorius Stedim Biotech.

She went to the pharmaceutical company Pharmacia & Upjohn (later Amersham, then GE Healthcare) in Sweden, where she was a senior scientist in cell culture development and later on team manager in cell culture process development.
She worked with the pharmaceutical company AstraZeneca. Her last position there was as BioProcess Director in R&D, accountable for the development of cell lines, cultivation and downstream processes, the release of materials for clinical trials, and technology transfer to CMOs. Since the beginning of 2009 Ms. Fenge has been General Manager at Recipharm Biologics, a leading Swedish contract developer and manufacturer, responsible primarily for Sales and Marketing functions.
Christel Fenge joined Sartorius as Vice President of Marketing, Fermentation Technologies in October 2010.


From R&D to marketing

Christel Fenge will provide insights based on her own career path and experience. Born in 1963, she certainly did not belong to a generation known to embrace equal opportunity. It was rather uncommon for German women to pursue an education in sciences or technology and afterwards follow a professional career in the pharma industry, plus have a family. However, some factors promoted her career, which included her childhood experience of role models, her husband's support and the excellent social network in Sweden, where she spent a significant part of her professional life.

Christel started her career as a bench scientist and was involved in biopharmaceutical drug development. At AstraZeneca, she built and ran a bioprocess development department. When the firm decided to close its Swedish biopharma business, Christel took her department right along with her to a new company, where she became its General Manager. Moving back to Germany involved further career development and also switching from a technical to a marketing role, especially when she joined Sartorius in 2010 as Vice President responsible for marketing of the fermentation portfolio. This biopharmaceutical equipment provider based in Goettingen, Germany, is the world leader in fermentation and a pioneer of single-use technologies for bioprocessing.

In the meantime, her two kids, who were teenagers at the time when she relocated, have grown up as independent young adults used to parents spending most of their time at work. Now she is on the verge of a new family phase and excited about seeing what the future will hold and which doors will be opening. 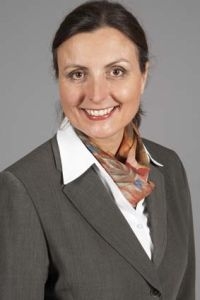