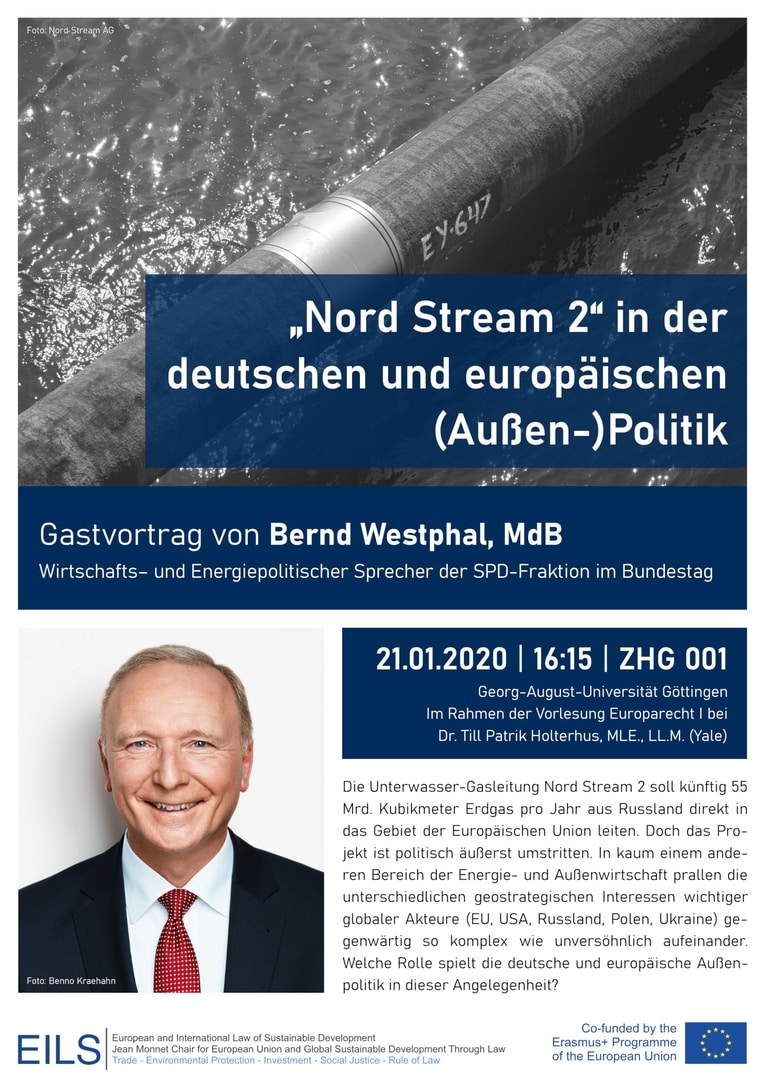 On 21 October 2019, Bernd Westphal gave a guest lecture on European and German foreign policy in the case of Nord Stream 2. Mr. Westphal is a member of the German Bundestag and the spokesperson on economic and energy policy of the SPD parliamentary group. The gas pipeline Nord Steam 2 is politically highly controversial, because it affects geostrategical interests of important global players as the EU, USA, Russia, Germany, Poland, the Ukraine and others. Mr. Westphal described how the pipeline could improve the security of supply within Germany and the EU, while economic and political interests of other state actors might be at stake. The lecture was followed by a critical debate about the Nord Stream 2 project, considering EU and state perspectives. 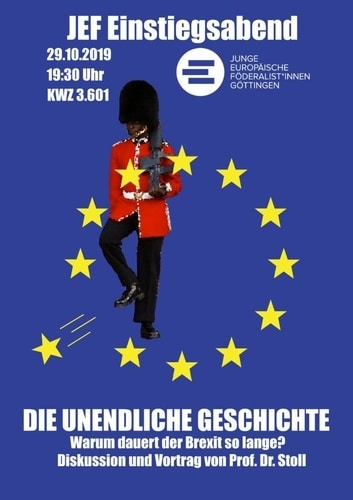 Presentation: Why does Brexit take so long?

On 29 October 2019, Prof. Dr. Stoll, head of the Jean Monnet Chair, gave a speech about the Brexit process at a public event of the Young European Federalists (JEF) in Göttingen. He described the legal framework of Brexit and outlined possible scenarios of how the United Kingdom could leave the EU. He then identified a political pivot point: how much EU legislation will the UK retain to enable trade at the Irish border? Ultimately, Brexit might challenge the unity of the UK. 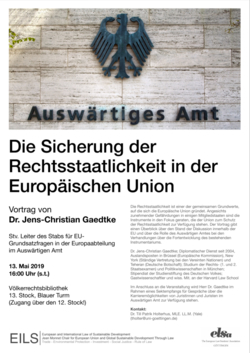 Presentation: the protection of the rule of law in the EU

On May 13, 2019, the Jean Monnet Chair, in cooperation with the European Law Students' Association (ELSA), hosted a presentation about the protection of the rule of law in the European Union. It was held by Dr. Jens-Christian Gaedtke, who is vice director of the unit for EU Policy Issues at the German Federal Foreign Office. He discussed the prospects of different legal instruments for sanctioning rule of law violations by EU member states, including the Article 7 TEU procedure, as well as the role of the Federal Foreign Office in the negotiation of new instruments at EU level. The rule of law is one of the founding principles of the European Union, but currently challenged by some EU member states. 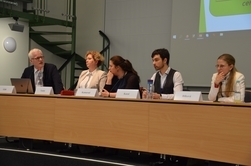 Does Rule of Law exist in the spheres of international law and European law? An if so, how can it be maintained in times of contestation? Such questions were the issue at this year's Research Forum of the European Society of International Law in Göttingen on the 4th and 5th April 2019. 160 legal scholars travelled to Göttingen in order to discuss the imminent questions with respect to the rule of law. The Research Forum was organised by the European Society of International Law (ESIL) together with holder of the Jean Monnet Chair for 'European Union and Global Sustainable Development Through Law', Prof. Peter-Tobias Stoll. The Forum offered a number of panels on historic, theoretical and economic aspects of the rule of law. Prof. Dr. Angelika Nussberger, Vice-President at the European Court of Human Rights gave a keynote speech. The Research Forum focuses on giving the opportunity to younger scholars to present their research. The university of Göttingen is only the second German university that had the honor of organising the ESIL Research Forum (the university of Heidelberg being the first in 2008).

Abstracts of the presentations held at the Research Forum can be found in the event's programme. 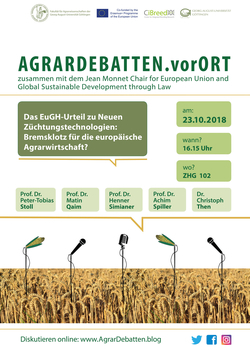 On October 23, 2018, the Jean Monnet Chair, in cooperation with the Göttingen University Faculty of Agricultural Sciences, presented a debate about the legal regulations of genome editing technology in the European Union. The speakers discussed a verdict of the European Court of Justice on the Crispr/Cas9 genome editing technology, which concludes that Crispr/Cas9 must be regulated the same as other genetic engineering techniques. The verdict has diverse implications for agriculture and environment. 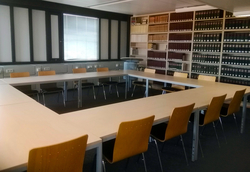 On September 18, 2018 a kickoff meeting was convened for the team. The team was informed about the welcome news of being granted by the European Union for the implementation of the proposed project. The meeting has also clarified some details of the project’s implementation. Moreover, the team discussed a draft of the Chair’s research agenda. Further research is being conducted in order to finalize the research agenda, which will then be accessible for the public.