Functional analyses of the primary cilium

Eukaryotic cilia and flagella are highly conserved microtubule-based organelles projecting from the surface of cells. They are anchored to the cell by the basal body, which develops from the mother centriole of the centrosome. Typically, basal bodies and centrioles are composed of nine triplet microtubules which are converted into the characteristic 9+2 structure of the axoneme at the transition zone. Eukaryotic cilia are divided into four groups: motile 9+2 cilia, motile 9+0 cilia (e.g. monocilia on cells of the embryonic node), sensory 9+2 cilia (e.g. vestibular cilia), and sensory 9+0 cilia (e.g. renal monocilia and photoreceptor connective cilia). Motile 9+2 cilia usually occur in groups on cells and are found in vertebrates e.g. on the respiratory epithelium, on ependymal cells lining brain ventricles, and on cells lining the oviducts and testes. Primary cilia are immotile with a 9+0 microtubule arrangement. Primary cilia are found singly on most epithelial and stromal cells throughout the mammalian body (for a comprehensive list of cells and tissues containing cilia see http://members.global2000.net/bowser/cilialist.html) but are not restricted to mammals. Recent studies revealed that the primary cilium is an essential sensory organelle in many tissues. Sonic hedgehog as well as platelet-derived growth factor signal transduction essentially depends on the primary cilium.
The presence of a primary cilium is associated with the establishment of polarity and differentiation of the cell. Entry into the cell cycle is in many cells preceded by ciliary resorption whereas exit from mitosis is accompanied by ciliary assembly. The observation that certain proteins associated with cilia-related diseases are localized to the primary cilium as well as to the basal body and to the centrosome further strengthens the view that all three organelles are structurally and functionally united.
Consistent with the broad and varied tissue and cellular distribution, dysfunction of cilia and their anchoring structure, the basal body, has been implicated in a broad range of human diseases, including cystic kidneys, hepatic and pancreatic abnormalities, skeletal malformations, obesity, and severe developmental defects.
We have isolated a mammalian gene that localizes specifically to the centrosome, the basal body as well as to the primary cilium and the flagellum. There are closely related genes in several other organisms, e.g. Xenopus, Danio and Drosophila. In situ hybridization revealed a specific expression pattern in tissues containing ciliated cells. Our goal is to investigate ciliary function during embryonic development as well as in the adult organism taking advantage of gene specific knock down/out in model organisms. 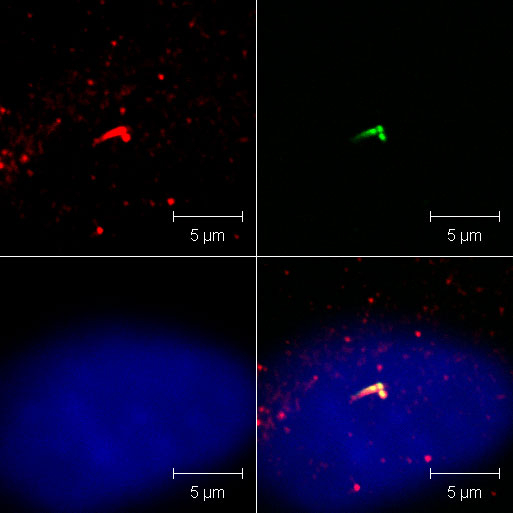