Redundancy of species within functional groups of ecological systems can be found when declining species diversity does not lead to a change in ecosystem processes. Important components of terrestrial ecological systems are plants, fungi, bacteria, soil fauna, dead organic matter, the physico-chemical soil environment (including chemical signalling). Hot spots of high material dynamics are the rhizospheres of plants, the hyphospheres of fungi and the microenvironments of soil engineers. The central experimental approach of the project is the variation of species diversity within functional groups of the food web in the laboratory (in microcosms and mesocosms) and in the field by the construction (addition of populations) and destruction of systems (elimination of populations). The effects of different diversity can be measured for a whole suite of ecosystem processes such as decomposition, mineralisation or primary production. The central question is: How does a system change in diversity or processes after elimination or addition of species or functional groups. 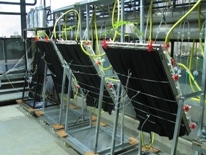