The rhizosphere is a region of high activity between roots, microorganisms and macrofauna. In this environment the turnover of biomass is very high. The present study focuses on the influences of two different deciduous tree species on the carbon and nitrogen soil dynamics in the rhizosphere. Beside the effects of the tree species, the influences of other biotas, especially earthworms, litter and mycorrhizas, on the soil are examined. Different experimental approaches investigate the effect on pH-value, oxygen concentration, carbon dioxide, nitrous oxide, root exudates and other biochemical parameters of soil. (A.-C. Fender)

In a second phase of the project, we want to build up a soil column experiment and incubate Fagus sylvatica and Fraxinus excelsior. The study focuses on the influences of two different deciduous tree species on the carbon and nitrogen soil dynamics in the rhizosphere. Further we will construct a microcosm experiment which will have the same experimental setup, but undisturbed soil, to investigate the effect of roots on pH-value, oxygen concentration, CO2, N2O and CH4-fluxes and other biochemical effects. Also we will participate in the joint diversity experiment that will be set up in autumn 2010 in Göttingen. (K. Schützenmeister) 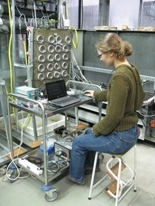