The competition between charge, spin and lattice degrees of freedom in perovskite manganites results in a number of coupled phase transitions and provides a unique opportunity to influence them by electromagnetic radiation. Strong electron- and spin-phonon couplings, which in addition can be tuned chemically, open a principal possibility to convert or even to store the photon energy into the photoinduced changes of crystalline structure. The project is focused on the study of microscopic mechanisms of the photoinduced metal-insulator and structural phase transitions. Photoinduced changes of the crystalline lattice (phonons) will be detected by means of Raman spectroscopy. 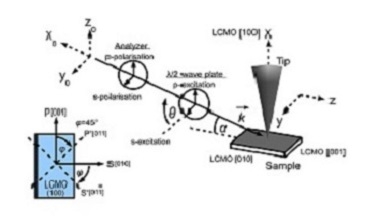 Fig. 2: Polarized far-field and tip-enhanced Raman spectra of LCMO films with (a) d=25 nm and (b) d=120 nm film thickness on STO (100) at room temperature. The spectra are taken in the parallel pp-, ss- and the crossed-scattering ps- and sp-configurations. For the 120 nm LCMO film additional far-field and tip-enhanced spectra in the p'p'-, s's'-, p's'- and s'p'-configurations with an in-plane rotation of Ø=45° are displayed.