"Integrated modelling of land use in a highly dynamic tropical landscape: socio-economic and environmental effects of different strategies of resource use"

The main hypothesis that will be tested is: Land-use scenarios considering socioeconomic, political and ecological effects of future potential changes in climate and landuse management allow a realistic range of predictions at plot, household and landscape levels.

We will build, test and apply an integrated land use model (SITE - Simulation of Terrestrial Environments) of the forest margin area of Central Sulawesi. One of the main objectives of this model is to incorporate many of the socio-economic and natural science aspects of the various subprojects into a single modelling framework. Other objectives are: to provide new insights into the current landuse-biophysical system in the forest margin, and to serve as a tool for scenario analysis of strategies to enhance stability in the forest margin area.
The goal of the project is to develop an integrated modelling framework, which consists of a land use model, an agro-ecosystem model, a biodiversity-coffee-interaction model and additional smaller components from the socio-economic or biophysical subsystem.

The basic idea of the land use model is to estimate the potential use of land as a function of driving forces such as population, income, and environmental change, and to allocate this land use on a grid cell basis, based on suitability maps and land use rules. The coefficients of the model result from other subprojects and regard cultural, demographic, economic and social factors that influence resource use and land use change in Sulawesi.

Since June 2006, the second version of the land use model is completed and calibrated with the field data from other sub-projects and other sources. - New detailed scenarios shall be developed, using a participatory approach (based on the AHP-method). In subsequent project phases we will expand the model by implementing new sub-models and feedback systems. By using the integrated model as a tool for scenario analysis, we plan to establish second order scenarios focussing on research questions related to different intensities of land use and changing amplitudes and frequencies of El Nino related droughts. 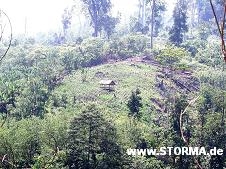