"Extra Gottingam non est vita, si est vita non est ita." (In English: Outside of Göttingen there’s no life; if there’s a life, then none like this.) This statement, by August Ludwig von Schlözer (1769-1809; publicist and historian), describes the real spirit of the city. Heinrich Heine (1797-1865; writer/journalist) once described this Gothic town of Göttingen as "famed for its sausages and university”. And it is the university which defines the city as a whole. There is a popular belief that Göttingen is not a university within city but rather a city within a university. With a prolonged history of over 250 years of academic and scientific excellence, the city has received the well-deserved title of “Stadt der Wissenschaft” (in English: City of science). How the university shapes a daily affair in the city can be seen from the simple fact that every third resident in the city is a student. This makes the city very young, dynamic and vibrant.


Göttingen used to be a small medieval village, until in 1737, when the university was established by George II, an elector of Hannover, at the same time also the King of England. With the gradual emergence in the world of science and philosophy, the city, with its various institutions, achieved even higher reputation. The ample fact makes it clear that 47 Nobel laureates, as well as many famous politicians (like Bismarck), philosophers and scientists in other disciplines either studied or worked here. This reputation even saved the city from bombing by allied forces at the end of World War II.


Albeit the upcoming cold war, and being very close to the old border between East and West Germany, the city never compromised its cosmopolitan nature rather, welcomed intellectuals of international stature. The city, appearing in the fairy-tales of Grimm Brothers (both professors in the university), has always fascinated the international academic and scientific community (likes of Oppenheimer, Benjamin Franklin, etc.). The names of famous historical personalities of the modern world and sciences who resided in Göttingen appear inscribed on their houses almost on every corner of the city. For its openness to many cultures of the world, many foreign languages can be heard everywhere. The city is perhaps one of the few in Europe, whose intellectual offsprings shaped the history of the modern world. 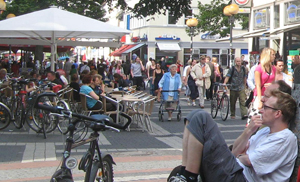 and thousands of bicycles. The whole downtown is easily accessible in few minutes by bicycle. The city is perhaps as big as a small dot compared to major metropolitan cities around the world, but it’s ideal composure of a sovereign serenity and a turbulent cosmopolitan agility provides this town its very invincible uniqueness.


Göttingen is located almost at the center of Germany. The city is almost halfway between Bonn (former capital of West Germany) and Berlin (present capital of Germany). In comparison to other major industrial cities, it is located 132km south of Hannover, 47km north-east of Kassel and 109km south-west of Braunschweig. The city doesn’t have its own airport, but it is easily accessible by train (from Frankfurt about 2.5 hrs and from Hannover about 1 hr) and by car (access via Autobahn A7).
Unfortunately, the climate is not the best aspect of the city. It is cold and rainy most of the year. It snows mostly in December and January. But it gets really warmer from June to September. Such weather in the city has also been inspiration for many fairy-tales of Grimm Brothers. Göttingen is surrounded by wonderful forests and the Harz mountainous region is not very far from the city. This truly makes all kinds of weather enjoyable. 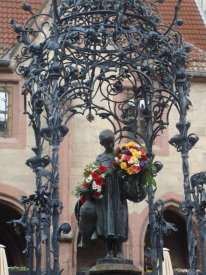 The whole downtown is, in fact, a main attraction. There are many wide-eaved, half-timbered houses dating back to the 11th century. Many façades are carved and painted. There are, nonetheless, two main attractions one can think of. The first one is old town hall, which shows the architectural excellence from 13th century. The interior describes beautifully the medieval stories from the central part of Germany. The other attraction is the statue called “Gaenseliesel”. It is a statue of a girl holding a basket and a goose. This girl is perhaps “the most kissed girl in the world”. According to tradition, every graduate student who gets his doctorate degree must kiss this little goose-girl after offering her the flowers. This ceremony takes place four times a year and these are must-attend events of the year. The city is also home to many museums and theater, which are regularly attended by large audiences.


The culture and, in particular, the nightlife is perhaps one of the most envious characteristics of the city. The town with more than half of the population being young makes it a perfect place for various cultural activities. There are three theaters, various international restaurants, many movies theaters and numerous bars located at a maximum of 20 minutes walking distance from one another. Every day, a certain event is hosted somewhere in the city. This can easily be found on the gratis event announcement pamphlets available almost everywhere in the city. The best thing about nightlife is that it is low budget without compromising on the quality. Bars and discos are open late till night unlike in some other major cities. If you want to go out for a chat with friends, you can go to any pub and if you want to dance, you can go to any salsa bar or mainstream disco. Almost the same number of people can be found at night on the street as during the day.

The above article was originally contributed by Mr.Nandan Joshi. He is a PhD student in Astrophysics at the Faculty of Physics in Goettingen and lives in Goettingen since 2001. 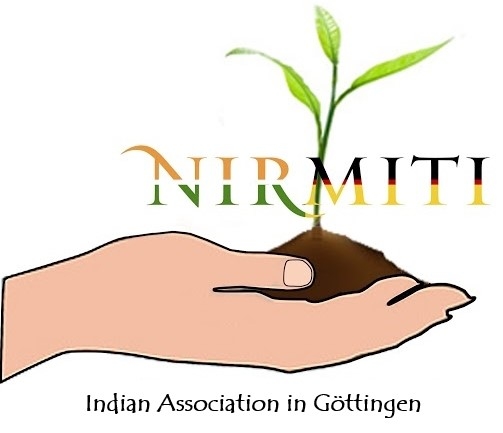