Responsibility for the breeding of the Goettingen Minipig™

The Goettingen Minipig™ is a well-established animal model which was developed in the former Institute of Animal Breeding and Genetics. It is used world wide as an experimental animal in areas like toxicology or experimental surgery. The group is responsible for the genetic management of the base population kept on the experimental farm in Relliehausen and the licensed multiplier herds in Denmark (since 1993) and the United States (since 2003). Up-to-date scientific methods are implemented to estimate breeding values and to maintain the genetic diversity. 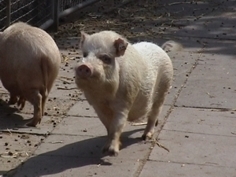