Area 2: Education at the Crossroads: Pagan, Jewish, and Christian Discourses in Late Antiquity

Paideia forms a meeting ground for late antique intellectuals regardless of their religious affiliation. On both the Christian and the pagan side, there are attempts at overcoming resp. ignoring the borders between religious groups and at proposing a common denominator of ethical and religious principles. I analyse these attempts and their impact on the formation of late antique intellectual identites. The point of departure is the still understudied figure of Themistios, to be followed by other authors such as Libanios, Synesios or Ammianus Marcellinus.

Educational ideals do not emphasise only texts and doctrines but also modes of behaviour and guidelines how to live a good life and reach perfection. Together with the Jewish studies scholars R. Naiweld and E. Abate I attempt to look into this aspect of late antique education and analyse methods, ideals and theories of late antique ethical education and formation in Christian and pagan texts, comparing them with Jewish discourses. First workshops have served to develop working categories for this comparative enterprise and to discuss the role of ‘thoughts’ in Jewish and Christian ascetic texts. 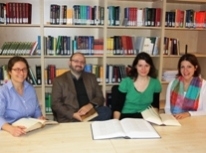