The CRC EDRIS is devoted to the comprehensive study of educational concepts and their interaction with different religious beliefs in Greco-Roman, Christian, Jewish, and Islamic culture from the first to the thirteenth centuries CE.
The EDRIS Research Centre provides the basis for the interdisciplinary collaborative work of three junior research groups. Their research focus will lie on the early Roman Empire, Late Antiquity, and Classical Islamic times, respectively.

The acronym EDRIS alludes to the person Edris or Idris, a figure known in the Muslim tradition as both a prophet mentioned in the Quran and also as the first human being to know how to read and write. Furthermore, he is seen as a great inventor and “the prophet of the philosophers”. 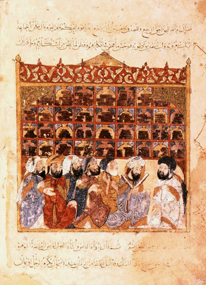