In recent years, a lively debate ensued on an old issue, namely the proper distinction between semantics and pragmatics against the background of the classical Gricean distinction between ‘what is said’ and ‘what is implicated’. From a linguist’s point of view, however, there has always been a regrettable lack of empirical data in this otherwise sophisticated debate. Recently, a new strand of research emerged under the name of experimental pragmatics, the attempt to gain experimental data on pragmatic and semantic issues by using psycholinguistic and neurolinguistic methods. This volume brings together work by scholars engaging in experimental research on the semantics/pragmatics distinction. The contribution of experimental pragmatics to pragmatic and semantic theory is discussed from a number of different angles, ranging from implicature and pragmatic enrichment to pragmatic acquisition, pragmatic impairment, and pragmatic processing. In addition, methodological issues are discussed. The contributions will appeal to theoretical linguists, psycholinguists, neurolinguists, and language philosophers. 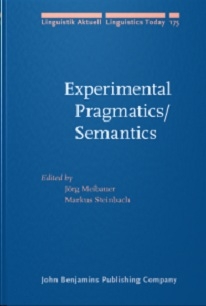