Chinese Music has gone through tremendous transformations since the end of the 19th century with the arrival of foreign knowledge and cultural practice. This talk wilI trace the beginning of Chinese modern music starting with the first group of Chinese students who studied in Japan and their collective effort in building China's new music and education. The bulk of the presentation will be divided into two parts: namely the development of China's music in the academy and vernacular popular music, considering almost a century's development in establishing China's new music. This talk will conclude with the development of China's avant-garde tradition since the opening of China in the 1980s and the recent return of traditional music as China's new modern music.
Ethnomustcologist Frederick Lau explores ways of listening to Chinese music as a window to understand Chinese society. He focuses on the linkage between music and culture and how music exemplifies larger social sentiments, practice, and ethos across time and space. In this talk, Lau shares with the audience multiple ways to approach Chinese music genres with an emphasis on the context in which music was produced and consumed. By way of exploring examples of Confucian ritual music, guqin music, regional music, contemporary traditional genres, Lau takes audiences through a wonderful journey of appreciating Chinese music with a focus on the cultural specificity of the period. 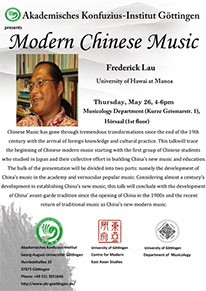