Collection of Musical Instruments at the University of Göttingen

With its important collection of musical instruments the Department of Musicology at the University of Göttingen boasts a typologically, historically and cultural-geographically diversified special collection that shows the -- both material and spiritual -- cultural asset "musical instrument" in the abundance of its forms and in view of its cultural-historical interwovenness and its ties to specific socio-cultural contexts. Its inventory includes 2,144 musical instruments from around the world, but mainly specimens from Europe, Asia and Africa (including Ancient Egypt).

With its institutional integration into the Department of Musicology and with the profile of its inventory and research activities, this collection reflects -- ever since its establishment -- an attitude of fertile interaction between the three musicological sub-disciplines -- Historical Musicology, Systematic Musicology and Ethnomusicology (in present Göttingen terms: Historical, Social and Cultural Musicology).

History of the collection

The collection was established in 1964 on the initiative of the then chair holder, Professor Heinrich Husmann (1908-1983) as a teaching and research collection. Its foundation was laid by the private collection of 1,050 objects that had been gathered since the 1930s, by

This was purchased by the state of Lower Saxony, with funds from the Volkswagen Foundation, for the University of Göttingen. The Moeck collection stemmed from a collector's passion that was shaped both by Moeck's leading role in the revival of the recorder since the early 1930s and his close relationship with the German youth music movement as well as by the influence of the "Kulturkreis" theory -- an academic paradigm striving for a world history, that was then predominant among Anthropology, Comparative Musicology and Organology. On the one hand, this has led to a special interest in woodwind instruments, on the other hand, it resulted in an extremely broad variation of the collection in the ethnomusicological area, where much originated from the art trade, such as by the renowned Hamburg Africana dealers Kegel & Konietzko (valuable pieces from the Belgian Congo), but also in the integration of the private archaeoorganological collection of Hans Hickmann (ancient Egyptian objects). Even before the purchase, the contents of several other private collections had come to Moeck's collection and had been integrated into it. These came from:

As a student of Friedrich Ludwig (Göttingen) and Johannes Wolf, Arnold Schering, Friedrich Blume, and Erich Moritz von Hornbostel (Berlin), Heinrich Husmann (1908-1983) strove for a fertile synthesis of the research approaches of "Historical", "Systematic" and "Comparative Musicology" (later "Ethnomusicology") and had cared in his days as an assistant in Leipzig from 1933-1939 for the rich collection of instruments in the Grassi Museum. As director, he initiated in 1964 -- in addition to the establishment of a psycho-acoustical laboratory -- the purchase of the Moeck collection for the Department of Musicology to create an institution in Göttingen providing the technical and personnel-wise requirements for it after the models of Berlin, Leipzig and Vienna. In an article published 1968 in Georgia Augusta he spoke out programmatically to integrate the collection into musicological research, focusing on the universal psycho-acoustic principles as well as the evolution of culture-specific tonal and harmonic systems and the key role of musical instruments as "generators of sound and of tonal systems" -- a groundbreaking idea, that should later play a central role in several research projects and monographs of the present curator of the collection, Klaus-Peter Brenner. Since its founding in 1964, until the end of the 1970s, the collection has initially been extended only by sporadic opportunity purchases. Since the early 1980s, however, it was systematically expanded through the purchase of well-documented ethnomusicological field research collections. Single, especially important pieces were added through purchase or as permanent loans in the field of European historical woodwind and keyboard instruments. As a result of these expansions the number of objects in the collection has more than doubled. The most important collectors, whose collections have enriched the collection after 1964, are:

Today, the collection with its 2,144 objects (including 315 new acquisitions that are recorded in the catalog only in a preliminary form and not yet included in the breakdown below, and after having returned 16 loans, as of April 12th, 2022) is one of the largest of its kind in Germany. Its wide-ranging portfolio represents both European and non-European traditions of music and instrument making and is divided into the following areas:

With the Göttingen recorder from the 14th century (on loan from the department of archeology of the city of Göttingen) there is one of very few musical instruments of the European Middle Ages that are preserved originally, among the exhibits:

and the presumed oldest surviving ancient Egyptian bow harp (between 2700 and 2200 BC) constitute only some of the rarities of international importance. The Göttingen Tagore-Tambura must also be mentioned here:

Further information is provided by the following article (PDF, 4.28 MB):

The primary cataloging of the collection is almost complete: in the catalog, which doubles as current inventory, the objects are documented at the same time by typological classification as well as in descriptive object records. The latter contextualizing the objects by extensive type- and object-related literature and archival references. Older partial inventories and records, such as purchasing correspondence and documents, were carefully evaluated and incorporated here. Included in the development of this inventory was already extensive provenance research and many corrections of former false attributions and names resulting thereof. Also, the biographical dimension of the collection history was given some attention here. A preliminary version of this catalog (work in progress) is available as a PDF file (total 5.51 MB) here:

The collection of musical instruments in research and teaching

Musical instruments / sound devices exist worldwide and that evidently at least for 40,000 years. They always are carriers of both, functions and meanings. This explains why modern organology, as established in the early 20th century and mainly influenced by Curt Sachs (Berlin) and his sphere, had been a genuinely interdisciplinary issue already in its formative phase and ever since, long before interdisciplinarity became a buzzword. It not only overlaps with all three sub-disciplines of musicology, but also with a variety of the humanities, social sciences and natural sciences, including the history of technology, ethnology, sociology / social history, all region-specific language, culture and art studies, and history and archaeology, including pre- and early history, as well as anthropology (especially paleoanthropology), music psychology (particularly psychoacoustics and cognitive science) and physiology. And moreover -- in view of the intense classification discussion going on within organology for more than a century -- library science and cybernetics, and -- in view of the developmental dimension of the cultural heritage item "musical instrument" -- evolutionary biology. The variety of interdisciplinary linkages that characterizes organology in general is reflected in particular in the research profile of the Göttingen collection of musical instruments. This is shown in the following document, which provides a classified and chronological overview of the history of research in, on and within this collection:

Students of musicology at the University of Göttingen, concern themselves regularly with the collection, both in the context of different courses, not least in the 2011 introduced two-semester BA-module "organology in the museum", but also as part of their bachelor's, master's and doctoral theses, thus making substantial contributions to its in-depth scientific research. Students from other disciplines and universities, such as art history, ethnology, musical instrument making and restoration do research on these stocks on occasion.

The permanent exhibition, existing in its present form since 1989 in the department building, the historical "Accouchierhaus" (maternity) Kurze Geismarstraße 1, shows a representative selection of 908 objects from the inventory on a total of 420 m² of exhibition space in 15 rooms on the first and second floor. The circuit on the second floor includes both a European and a non-European section. While the exhibits in the European section are primarily sorted by type, the arrangement in the non-European section follows primarily ethno-geographical criteria. Currently, the exhibition is open to the public only during guided tours. Media coverage, as listed below, documents the resonance of the collection in printed museum guides, the press, radio, television and film productions, as well as on the internet: 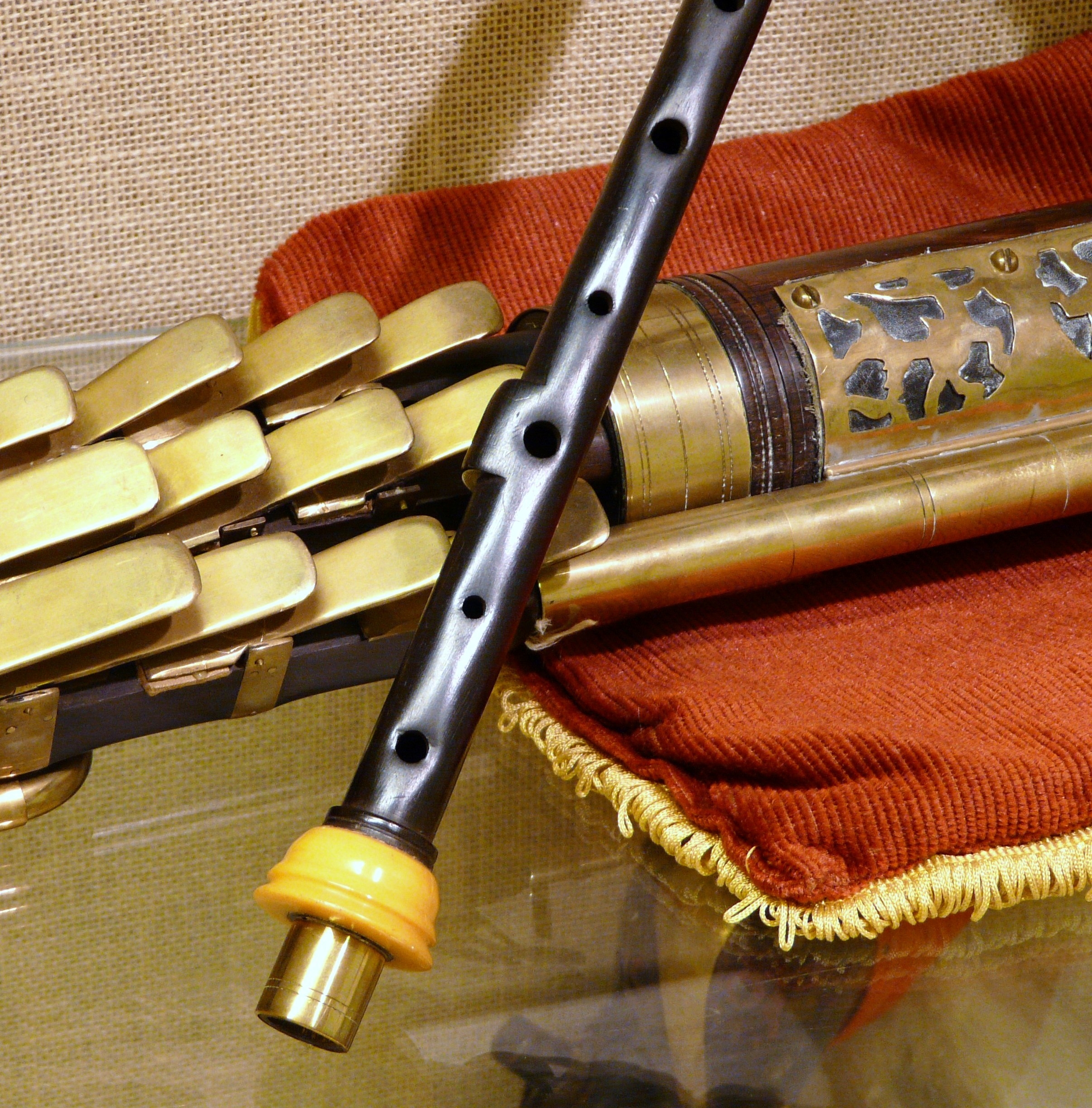