The “Göttinger Sieben” have become an internationally recognised symbol for the rebellion of conscience against political power. In 1838, the seven Göttingen professors, among them the brothers Jacob and Wilhelm Grimm and the physicist Wilhelm Weber, accused the reigning king of Hannover, Ernst August, of breaching prevailing law, and in a letter of protest they opposed the repealing of the Hanoverian Staatsgrundgesetz, the Basic Law of the state. As a result, they had to leave Göttingen and forego their secure positions. In the “Göttinger Erklärung” of 1957, Otto Hahn, Carl Friedrich von Weizsäcker and Werner Heisenberg, together with the 15 other leading scientists, replicated this example of assuming social responsibility by declaring themselves to be strictly against any form of German participation in the production and use of nuclear weapons. “Through the University Speech we seek to place these questions concerning knowledge, action and responsibility – questions which carry high relevance today – at the centre of a dialogue addressing and bringing together all members of the University”, University President Prof. Dr. Ulrike Beisiegel explains.

The “Göttingen University Speech – Scholarship and Responsibility” is designed to create a forum in which issues of current relevance can be addressed beyond the frontiers of subjects and disciplines. The intention is that those invited to deliver the speech are figures who, not only through their reputation in the academic world but also as a result of their contributions to the great debates of our time, have influenced our view of problems and our way of thinking about them, and who continue to do so today. 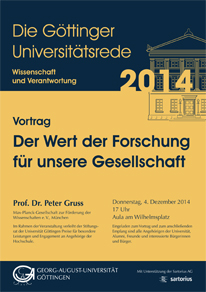