Press release: Researchers get to the bottom of fairy circles

Fairy circles are round gaps in arid grassland that are distributed very uniformly over the landscape and only occur along the Namib Desert in southern Africa and in parts of Australia. Various theories circulate about the actual cause of these unusual spatial patterns, ranging from poisonous Euphorbia plants or rising gases, to ants, termites or plant competition for sparse water resources. Scientists from the University of Göttingen, Australia and Israel have now got to the bottom of their cause with soil investigations and drones. The results suggest that the fairy circles in Australia were caused by processes such as the weathering of the soil by heavy rainfall, extreme heat and evaporation. The extensive data collected by the researchers argued against a causal relationship to underground termite structures.

So far, fairy circles are only known from southwestern Africa around the Namib Desert and from Western Australia near the miners' town of Newman. While the origin of Namibia's fairy circles has been puzzled over since the early 1970s, the Australian fairy circles were only discovered in 2014. Despite a distance of around 10,000 kilometers, both occurrences have an identical spatial pattern, which makes them direct "relatives".

Supported by the German Research Foundation (DFG), the scientists now dug a total of 154 holes in 48 fairy circles east of Newman over a length of twelve kilometers in order to assess the possible influence of termites objectively and systematically. With the help of drones, they mapped areas of 500 by 500 meters to compare typical vegetation gaps – such as those caused by harvester termites in large parts of Australia – with typical fairy circle gaps. In addition, they investigated the soil conditions in the area of the fairy circles and in adjacent reference areas, where no grass grows over large areas.

"The vegetation gaps caused by harvester termites are only about half the size of the fairy circles and much less ordered", explains Dr Stephan Getzin from the University of Göttingen. "And in most cases, we didn’t even find any hard subterranean termitaria that elsewhere in Australia prevent the growth of grasses". According to the researchers, however, the high soil compaction and clay content in the investigated fairy circles and vegetation-free reference areas are indications that the fairy circles are formed by abiotic processes such as mechanical weathering of the soil by heavy rain in cyclones, extreme heat and evaporation.

"Overall, our study shows that termite constructions can occur in the area of the fairy circles, but the partial local correlation between termites and fairy circles has no causal relationship", explains Getzin. "So no destructive mechanisms, such as those from termites, are necessary for the formation of the distinct fairy circle patterns; hydrological plant-soil interactions alone are sufficient.”

In Namibia, research has so far concentrated on typical fairy circles in homogeneous landscapes. With the support of the Schimper Foundation, in a pilot study the scientists now for the first time focused on extraordinary fairy circles in atypical environments in order to better understand the actual threshold conditions for circle formation. Using Google Earth imagery, they found unusual circles – huge ones more than 20 meters in diameter, chain-like oval ones more than 30 meters long in drainage lines, circles in car tracks and circles in particularly dry, disturbed or Euphorbia-rich areas.

"Here our soil moisture studies showed that under such varied conditions the fairy circles function less as water reservoirs than under typical homogeneous conditions where they are extremely well ordered", says Getzin. With this work, the scientists intend to open up a new thematic field, as they hope to gain further insights into the formation and persistence of the fairy circles from studying "extraordinary" fairy circles.

Excavations in a fairy circle. Three of the co-authors of the study are Dr. Todd E. Erickson, Dr. Hezi Yizhaq and Dr. Miriam Muñoz-Rojas (from left to right). Photo: Dr. Stephan Getzin

The fairy circles seen from the air. They form an additional source of water in this arid region, because the rainwater flows towards the grasses on the edge. Photo: Dr. Stephan Getzin 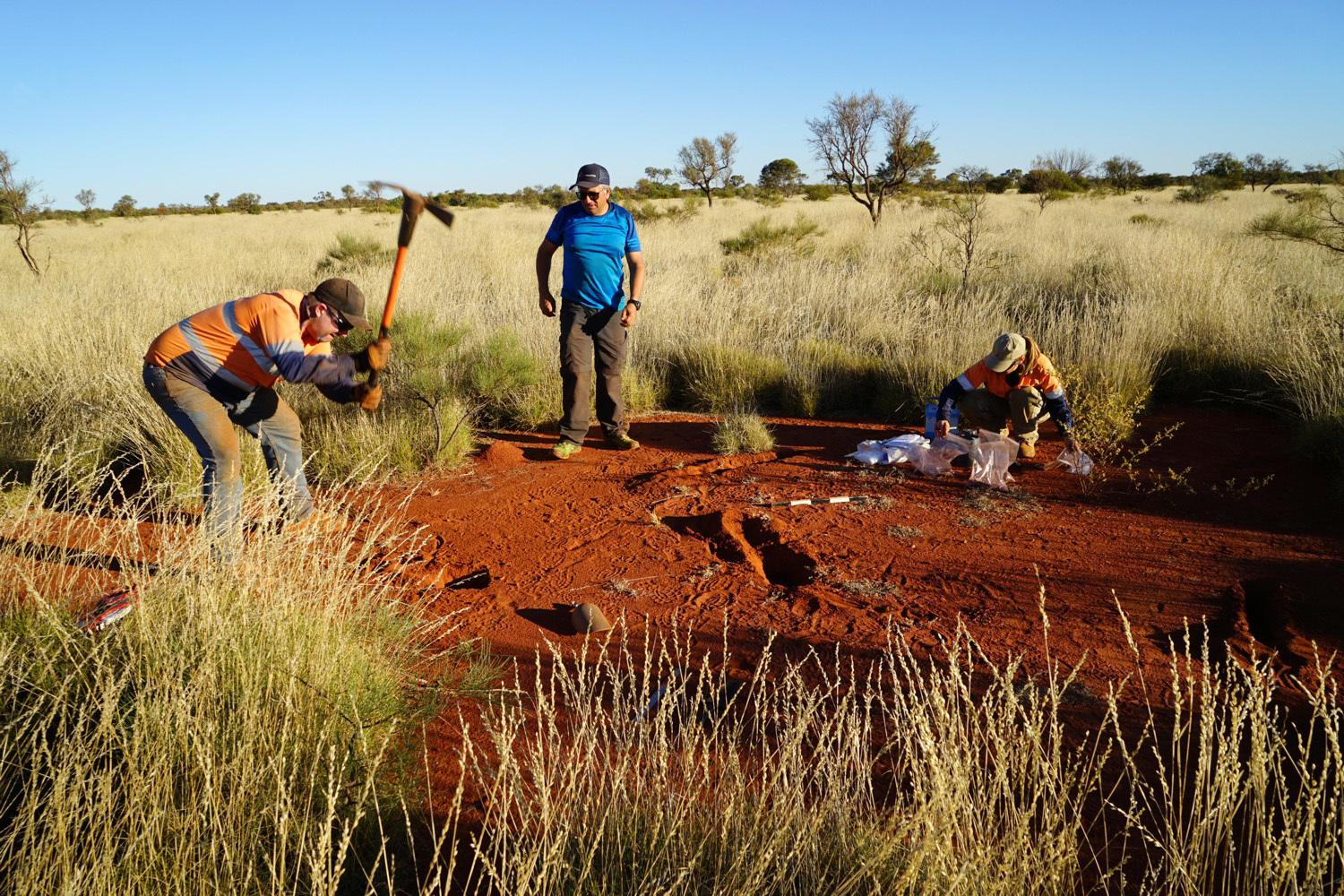 Excavations in a fairy circle. Three of the co-authors of the study are Dr Todd E. Erickson, Dr Hezi Yizhaq and Dr Miriam Muñoz-Rojas (from left to right). 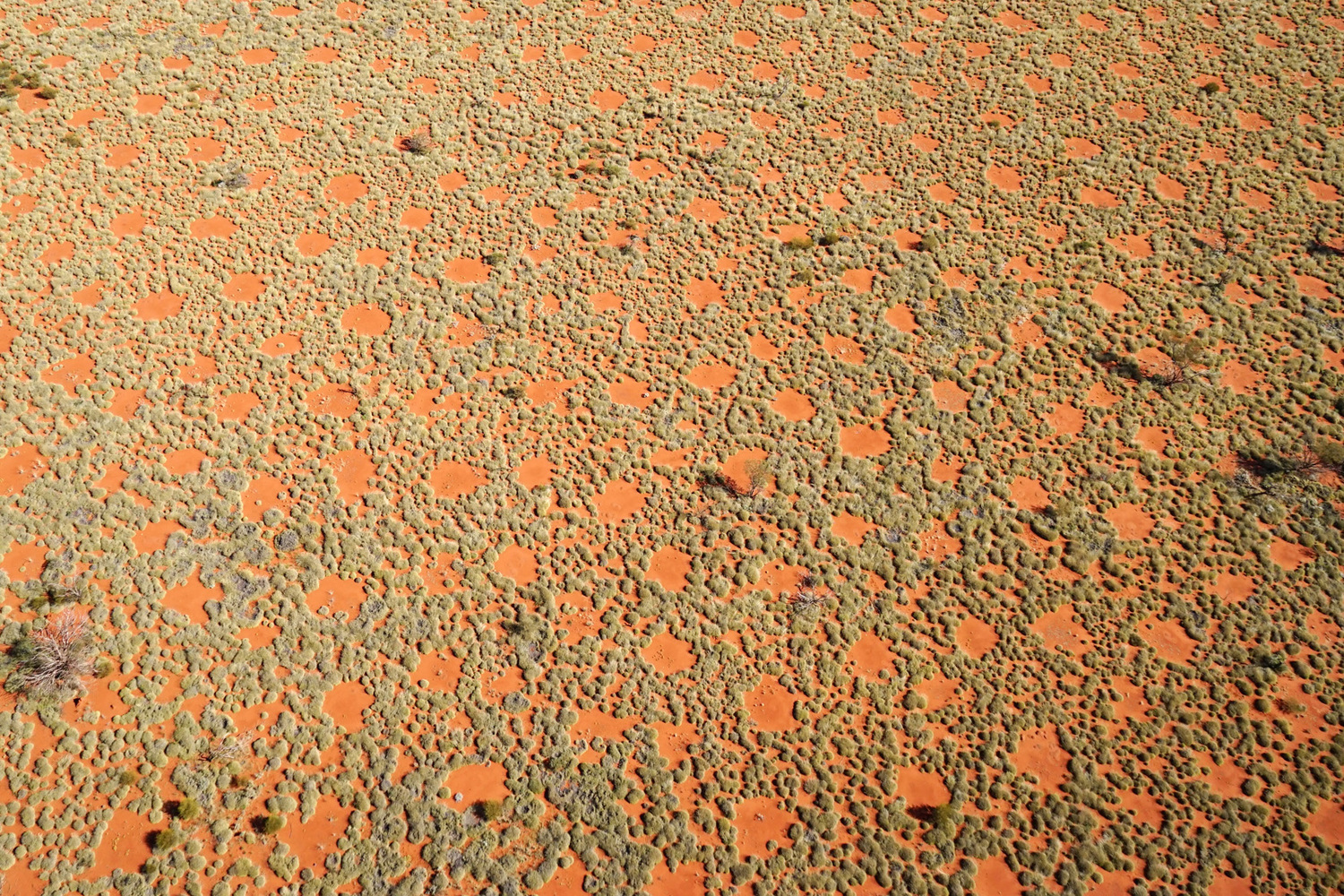 The fairy circles seen from the air. They form an additional source of water in this arid region, because the rainwater flows towards the grasses on the edge. 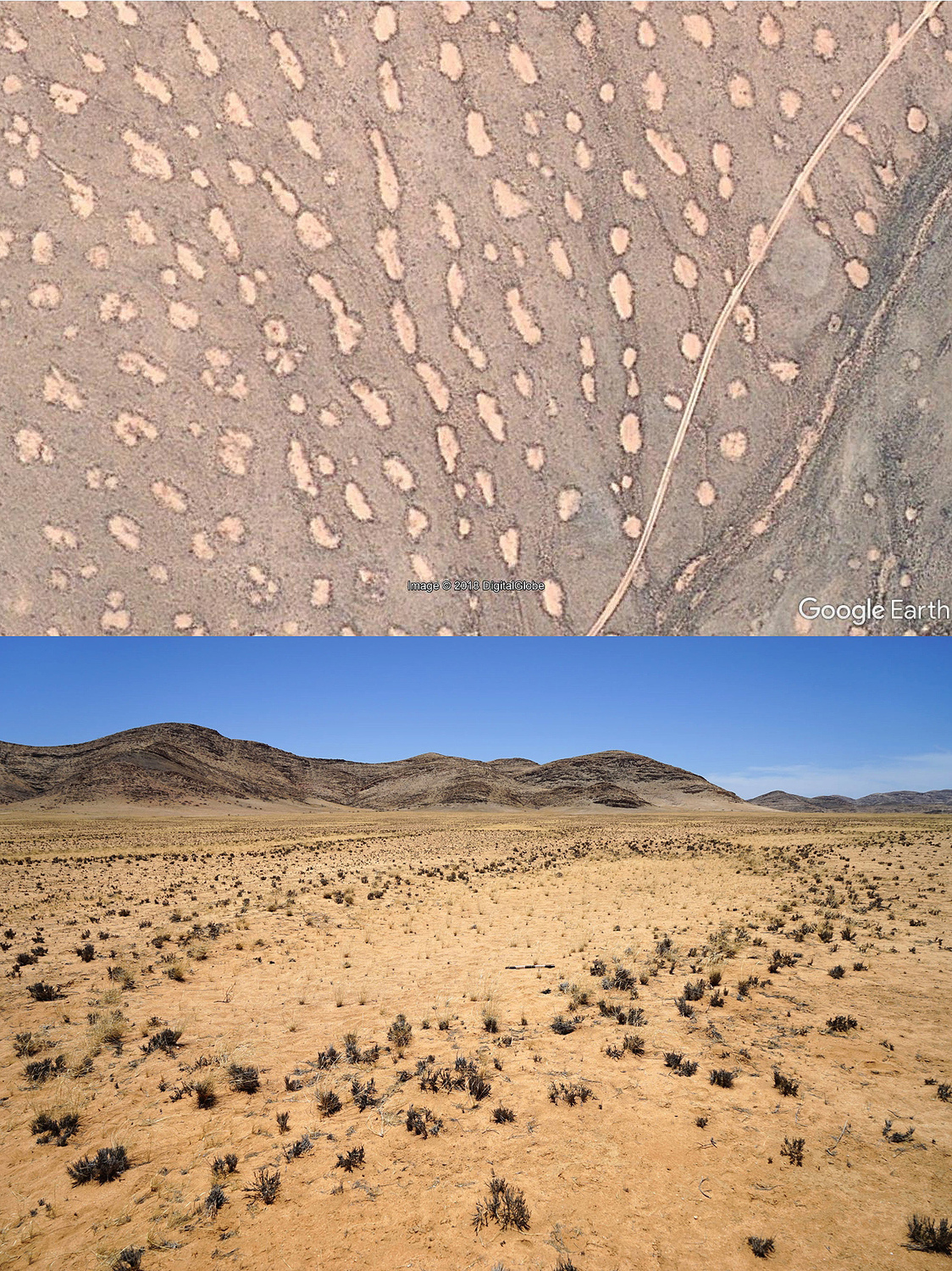