An international research team led by the University of Göttingen has deciphered the defence mechanism of filamentous fungi. Moulds are a preferred food source for small animals. As fungi cannot escape predation by running away, they produce defence metabolites, thereby rendering themselves toxic or unpalatable. After decades-long unsuccessful investigation, these defence compounds have now been identified. The results were published in Nature Communications.

Small soil animals such as worms, springtails, and mites constitute about 20% of the living biomass in soil. Since the 1980s, studies on fungal defence against animal predators have focused on mycotoxins. The toxicity of mycotoxins to insects has been documented in numerous studies; however, attempts to prove the ecological function of mycotoxins in defence against predation have failed. Researchers in Göttingen discovered that rather than mycotoxins, certain fungal pigments protect fungi from predation. These pigments are produced by many ascomycetes and belong to the class of dimeric naphthopyrones. Red pigment aurofusarin – which is produced by fungi of the genus Fusarium and by some tropical genera – was studied in detail.

Springtails and insect larvae recognised and avoided food modified to contain aurofusarin. Definitive proof of the ecological function of aurofusarin was obtained with the help of fungal mutants in which aurofusarin synthesis was disrupted by genetic engineering. Springtails, woodlice, and insect larvae accepted the mutants as food while avoiding fungal colonies with aurofusarin. Feeding experiments with different fungal species and mutants revealed that aurofusarin served as the major – or even only – defence compound in these fungi. Initial experiments with other bis-naphthopyrones, produced by the fungal genera Aspergillus and Penicillium, revealed that they also show antifeedant activity (ie they inhibit feeding).

Why do bis-naphthopyrones repel fungivores? According to the mycotoxin hypothesis, bis-naphthopyrones should be toxic. “We could not detect any toxicity when feeding springtails with food containing aurofusarin”, explains Yang Xu, a PhD student in Göttingen and first author of the paper. “The animals survived feeding on aurofusarin for five weeks without apparent harm. Aurofusarin thus appears to be a non-toxic antifeedant.”

Why has aurofusarin not lost its antifeedant effect after millions of years? Synthetic fungicides often lose inefficiency after a couple of years, and plant defence chemicals do not protect their producers from adapted herbivores. Why have soil animals not adapted to fungal defence chemicals? “An explanation may lie in the very large amounts of defence chemicals that accumulate in fungal cultures”, explains Professor Petr Karlovsky, head of Molecular Phytopathology and Mycotoxin Research Lab. “Mutations leading to the inactivation of defence chemicals or that reduce their binding to (yet unknown) receptors would not abolish the effect of defence chemicals.”

If this hypothesis is proven correct, aurofusarin would be the first example of a new phenomenon in chemical ecology: the prevention of the adaptation of target organisms due to extremely high concentrations of defence chemicals. 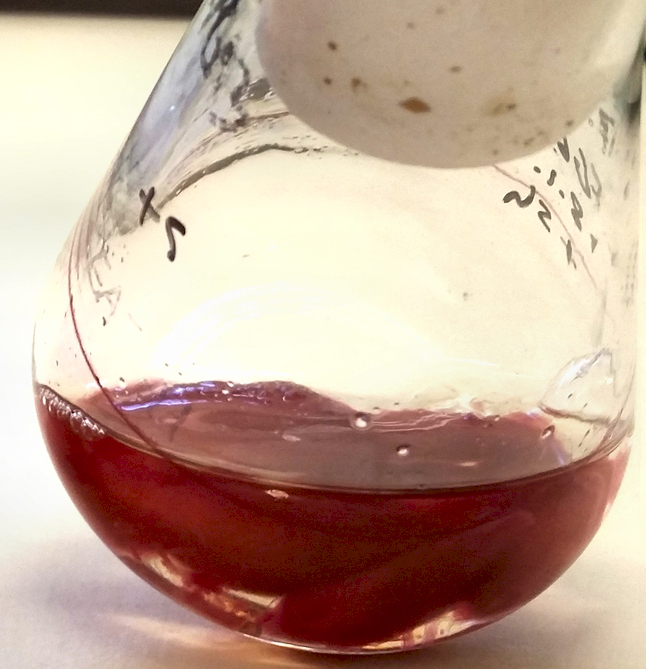 Mycelium of the fungus Fusarium graminearum (coloured red by Aurofusarin) growing in a liquid culture medium. 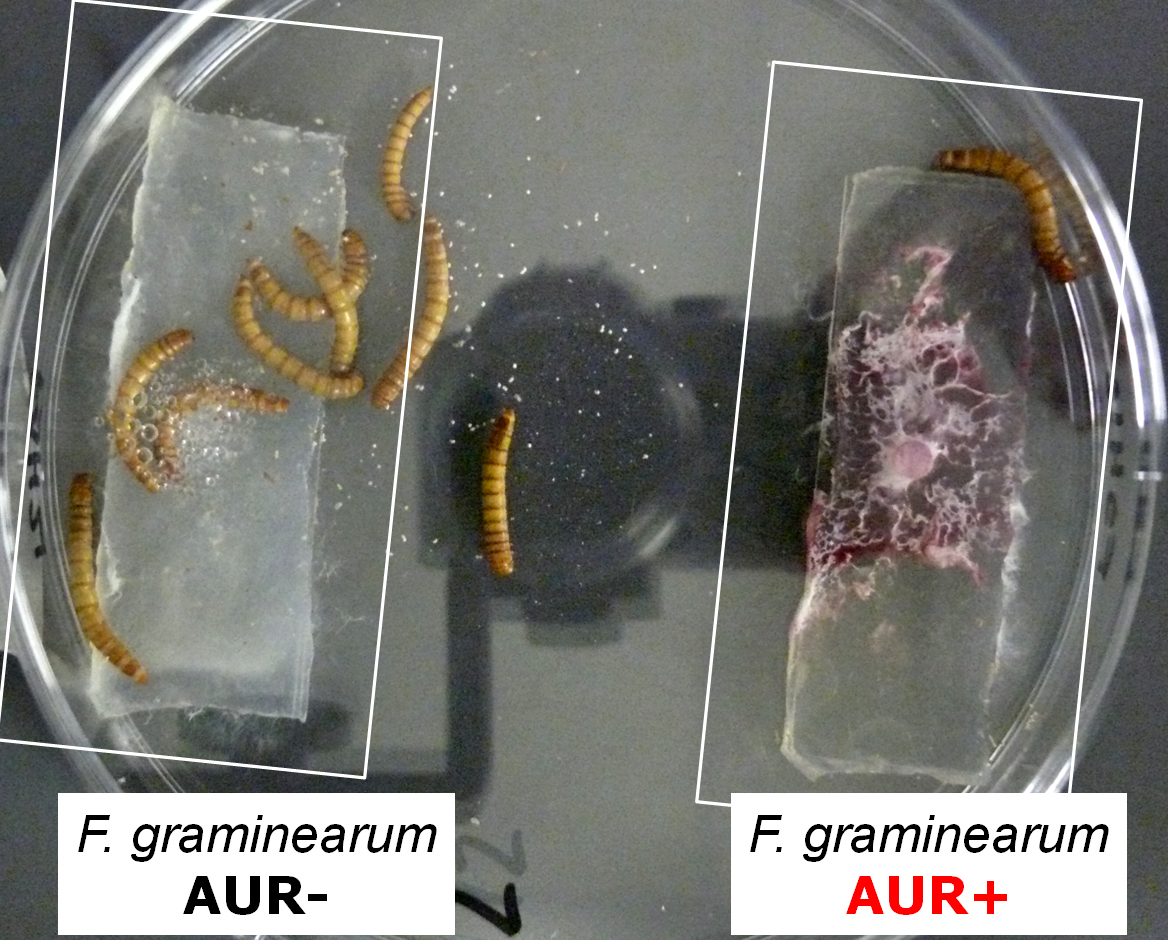 Mealworms offered the mould Fusarium graminearum with Aurofusarin (right) and its mutant without Aurofusarin (left), prefer the mutant. 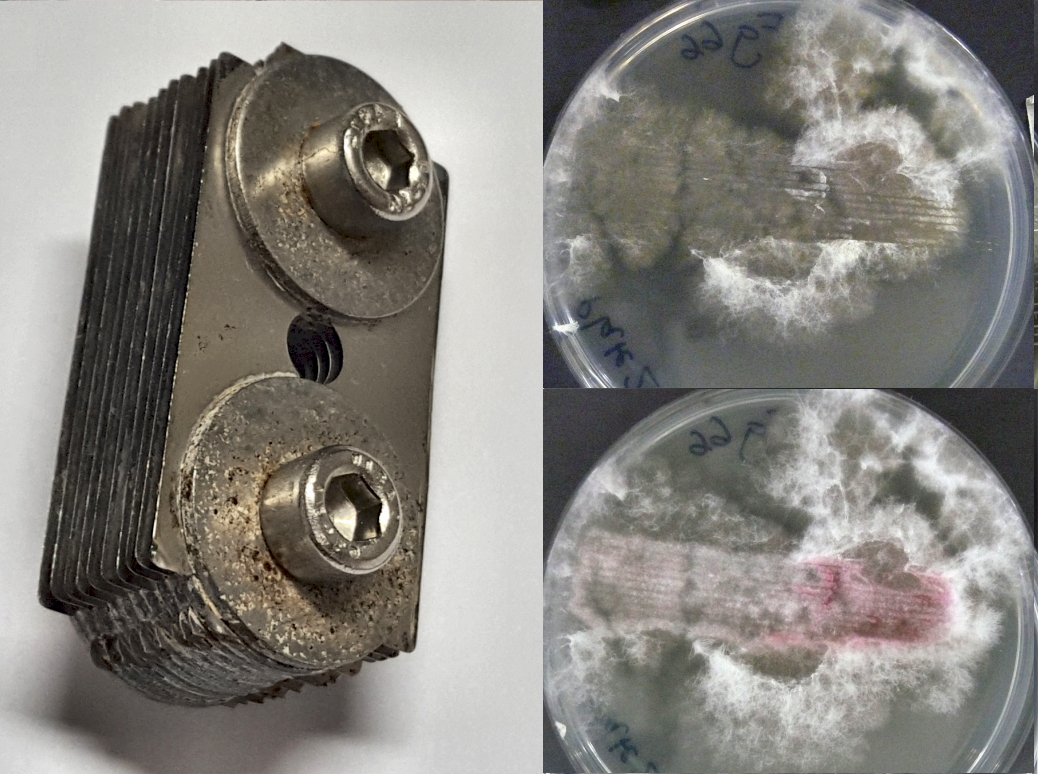 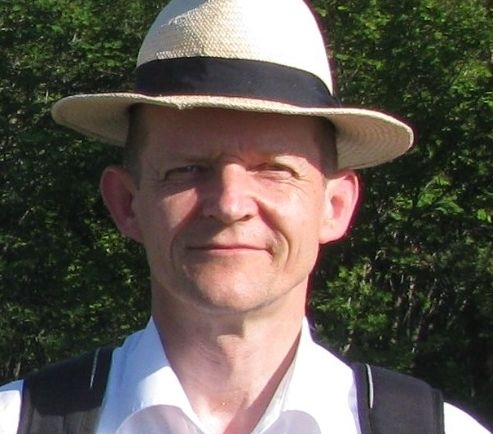