The threat to insects and other small creatures from rainforest clearance and the consequences for the environment in tropical regions are recognised. What has not been studied so far is whether, and how, the oil palm plantations are able to sustain the populations of tiny below-ground animals that work to keep the soil healthy. In a new study led by the University of Göttingen, scientists have discovered high levels of biological activity in regions above ground level that may serve as oases for soil organisms. They identified that the suspended soil in the gaps where the frond grows out of the palm trunk may in fact provide novel microhabitats where soil creatures can thrive. The research was published in Frontiers in Ecology and the Environment.

The rapid expansion of oil palm plantations throughout Southeast Asia due to increasing global food demand has knock-on effects for the environment. Rainforests may be cleared resulting in major losses of soil structure, fertility and biodiversity. In the soil, many creatures are important for ecosystem functions: making nutrients available, forming soil structures, and providing other services such as decomposition, pollination and pest-control.

To find out about the biological activity in soil in oil palm plantations, researchers from the University of Göttingen examined soil communities in six different microhabitats in a 16-year-old oil palm plantation in Sumatra, Indonesia. Scientists from the Collaborative Research Centre EFForTS (Ecological and Socioeconomic Functions of Tropical Lowland Rainforest Transformation Systems) collected 9,205 individuals of macrofauna (earthworms and large arthropods such as ants, fly larvae and millipedes), 40,229 of mesofauna (small arthropods such as springtails and mites), 2,895 nematodes, and 4,467 testate amoebae (single-celled microorganisms that have a protective shell around them).

“Since many oil palm plantations may be with us to stay, it is imperative to get a better understanding of soil biodiversity across microhabitats,” explains Dr Anton Potapov from the University of Göttingen. “This will help farmers and plantation-owners to develop more sustainable methods that can preserve ecosystem functioning.” One of the microhabitats the researchers studied is formed from the accumulation of dead leaves and other detritus in the gaps at the base of palm fronds. The detritus forms soil-filled crevices suspended above the ground, which make little corners and recesses for soil life. The scientists’ analysis showed there were far more active soil dwellers in these suspended soils than below ground.

“It is important to realize that high activity in the suspended soil does not compensate for the degradation of soil below ground,” adds Dr Valentyna Krashevska. “But now we can take advantage of this knowledge and better preserve suspended soil during plantation management, which may partly offset the damage caused by oil palm agriculture to soil-borne processes and biodiversity.” 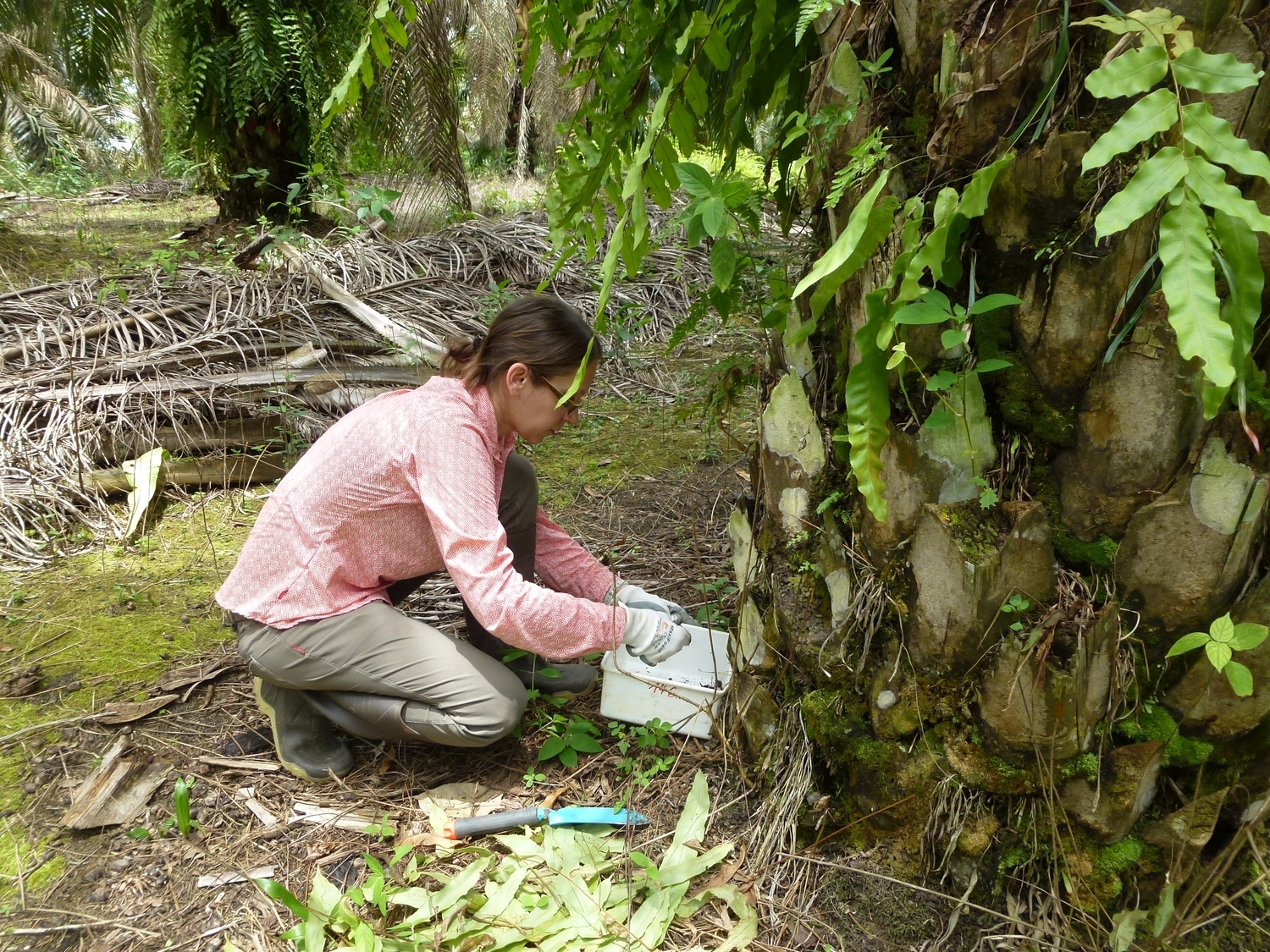 Dr Valentyna Krashevska collecting samples of organisms from above the ground for analysis. The team collected over 55,000 living organisms including ants, worms, larvae, millipedes, mites, nematodes and single-celled microorganisms from six different microhabitats.

Moss and detritus collects in the axils of cut palm fronds forming pockets of suspended soil which support many soil organisms.

Many individual creatures (like this tiny oribatid mite) were collected as part of the analysis of soil life. 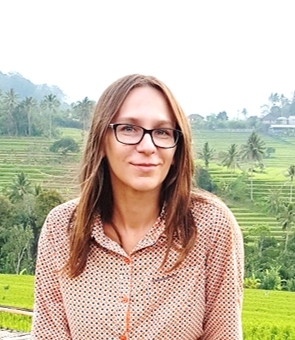 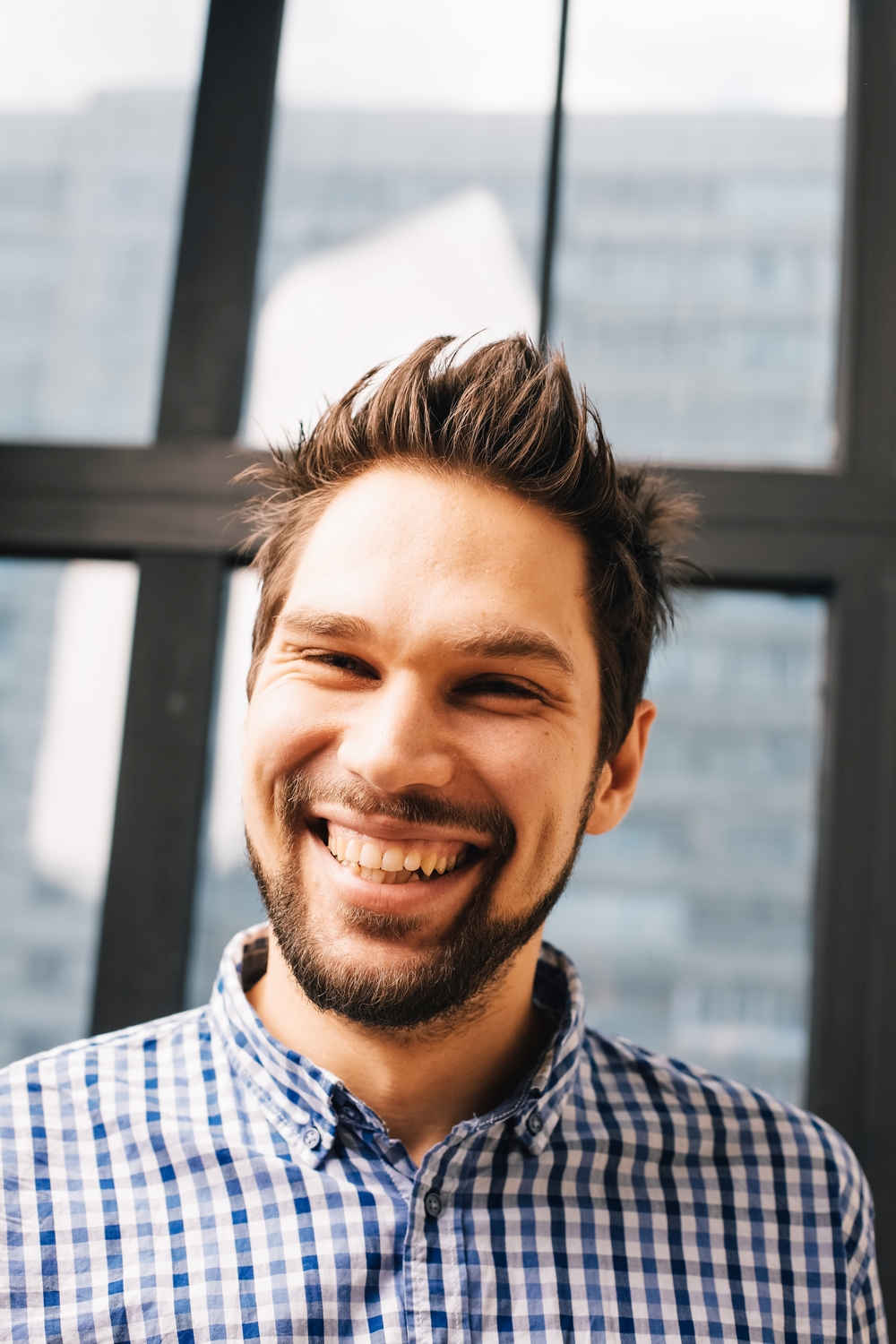 Photo: A Popatov, University of Göttingen