In the convection zone of the star, the plasma currents make a huge turnover that lasts about 22 years

(mps) Solar activity fluctuates in a rhythm of about eleven years, which is reflected among other things in the frequency of sunspots. A complete magnetic period lasts 22 years. Scientists have long been puzzling over what causes this cycle. It must be related to the conditions beneath the "skin" of our star: A layer of hot plasma - electrically-conductive gas - extends from the surface to 200,000 kilometers below. The plasma within this convection zone is constantly in motion.

A team of scientists from the Max Planck Institute for Solar System Research, the University of Göttingen and New York University Abu Dhabi has now succeeded in drawing the most comprehensive picture of the plasma flows in nort-south-direction to date. The researchers have found a remarkably simple flow geometry: the plasma describes a single turnover in each solar hemisphere, which lasts for about 22 years. In addition, the flow in the direction of the equator at the bottom of the convection zone causes spots to form closer and closer to the equator during the solar cycle.

The number of sunspots on the visible solar surface varies; sometimes there are more, sometimes fewer. The distance between two sunspot maxima is about eleven years, after 22 years the sunspots are again magnetically polarized in the same way. During the maximum not only large sunspots appear, but also active regions. In addition, impressive arcs of hot plasma reach far into the solar atmosphere, particles and radiation are hurled into space in violent eruptions. At the activity minimum, however, the sun calms down noticeably.

“Over the course of a solar cycle, the meridional flow acts as a conveyor belt that drags the magnetic field along and sets the period of the solar cycle”, says first author Professor Laurent Gizon, MPS Director and professor at the University of Göttingen. “Seeing the geometry and the amplitude of motions in the solar interior is essential to understanding the Sun’s magnetic field”, he adds. To this end, Gizon and his team used helioseismology to map the plasma flow below the Sun's surface.

Helioseismology is to solar physics what seismology is to geophysics. Helioseismologists use sound waves to probe the Sun's interior, in much the same way geophysicists use earthquakes to probe the interior of the Earth. Solar sound waves have periods near five minutes and are continuously excited by near surface convection. The motions associated with solar sound waves can be measured at the Sun's surface by telescopes on spacecrafts or on the ground.

In this study, Gizon and his team used observations of sound waves at the surface that propagate in the north-south direction through the solar interior. These waves are perturbed by the meridional flow: they travel faster along the flow than against the flow. These very small travel-time perturbations (less than 1 second) were measured very carefully and were interpreted to infer the meridional flow using mathematical modeling and computers.

Because it is small, the meridional flow is extremely difficult to see in the solar interior. “The meridional flow is much slower than other components of motion, such as the Sun’s differential rotation”, Gizon explains. The meridional flow throughout the convection zone is no more than its maximum surface value of 50 kilometers per hour. “To reduce the noise level in the helioseismic measurements, it is necessary to average the measurements over very long periods of time”, says Dr. Zhi-Chao Liang of MPS.

The team of scientists analyzed, for the first time, two independent very long time series of data. One was provided by SOHO, the oldest solar observatory in space which is operated by ESA and NASA. The data taken by SOHO’s Michelson Doppler Imager (MDI) covers the time from 1996 until 2011. A second independent data set was provided by the Global Oscillation Network Group (GONG), which combines six ground-based solar telescopes in the USA, Australia, India, Spain, and Chile to offer nearly continuous observations of the Sun since 1995.

“The international solar physics community is to be commended for delivering multiple datasets covering the last two solar cycles”, says Dr. John Leibacher, a former director of the GONG project. “This makes it possible to average over long periods of time and to compare answers, which is absolutely essential to validate inferences”, he adds.

Gizon and his team find the flow is equatorward at the base of the convection zone, with a speed of only 15 kilometers per hour (running speed). The flow at the solar surface is poleward and reaches up to 50 kilometers per hour. The overall picture is that the plasma goes around in one gigantic loop in each hemisphere. Remarkably, the time taken for the plasma to complete the loop is approximately 22 years – and this provides the physical explanation for the Sun’s eleven-year cycle.

The computing infrastructure for this work was supported by the German Aerospace Center (DLR) with funds from the Federal Ministry of Economics and Technology (BMWi) allocated by the German Bundestag. Partial support was provided by the European Research Council under Synergy Grant WHOLE SUN. The Center for Space Science at New York University Abu Dhabi is funded by the NYUAD Institute. 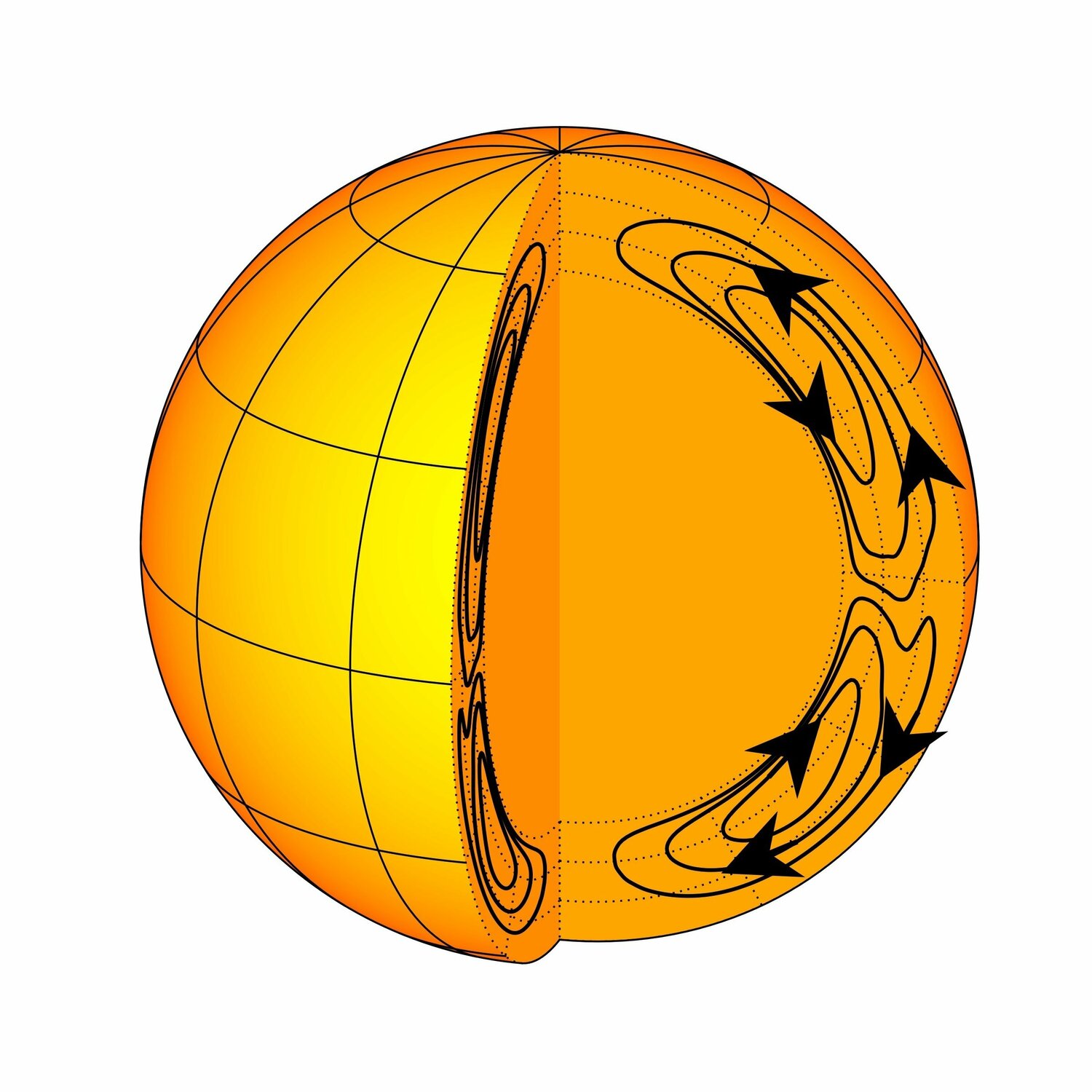 Powerful flows: Ionized gas inside the Sun moves toward the poles near the surface and toward the equator at the base of the convection zone (at a depth of 200 thousand kilometres or 125 thousand miles). 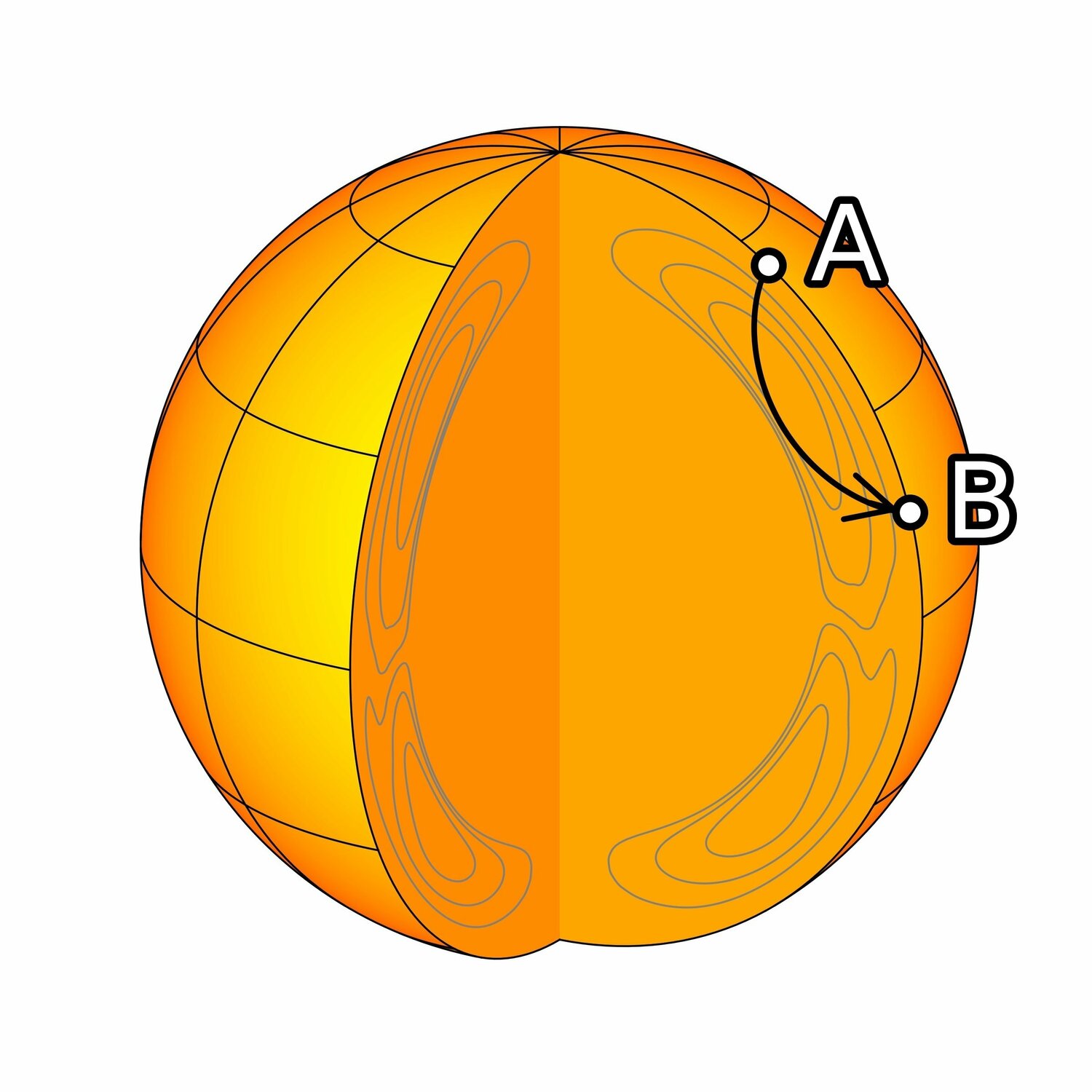 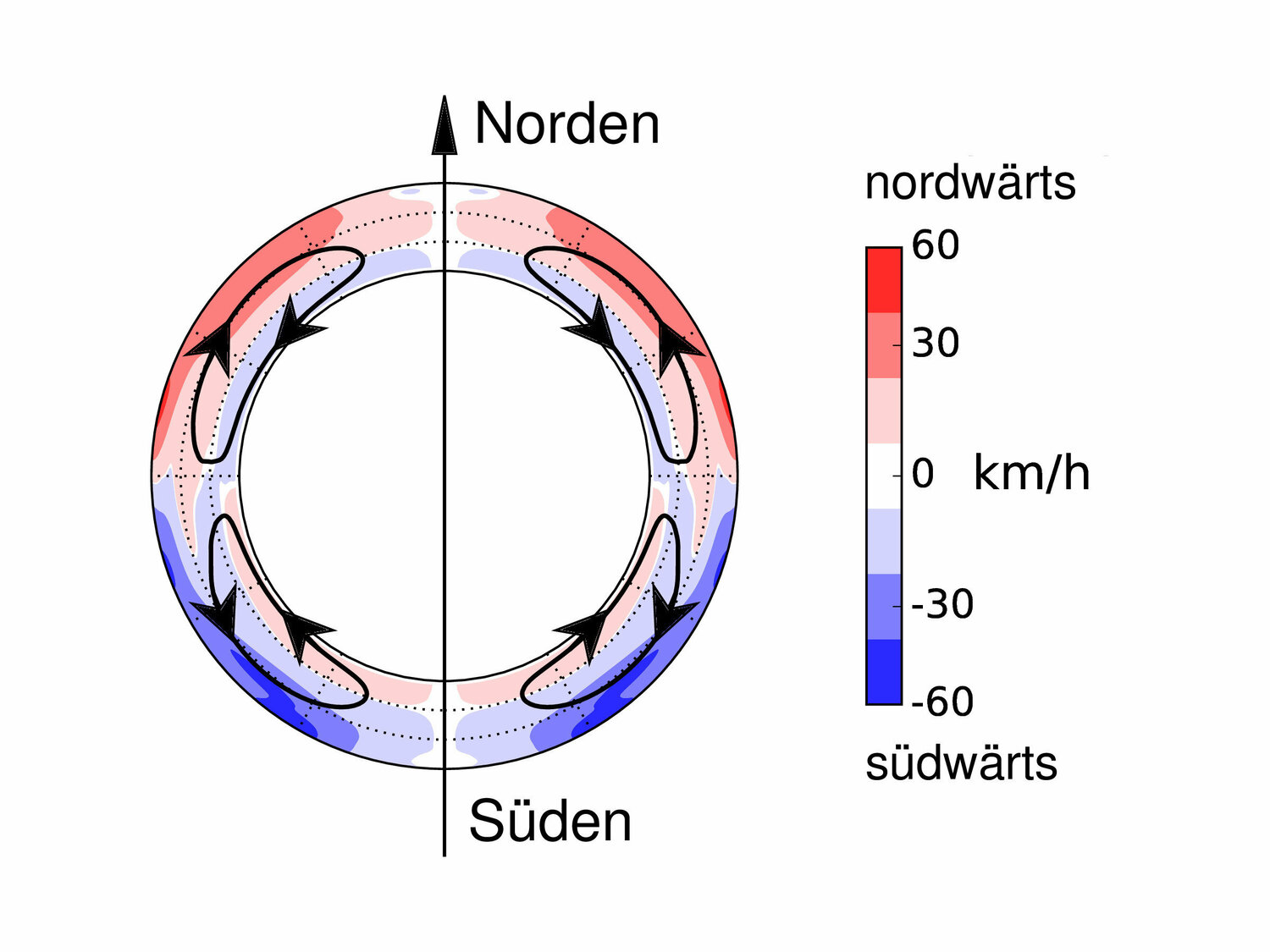 Driving force: Helioseismology was used to measure the Sun’s meridional flow. This flow controls the evolution of the global magnetic field and the number of sunspots. 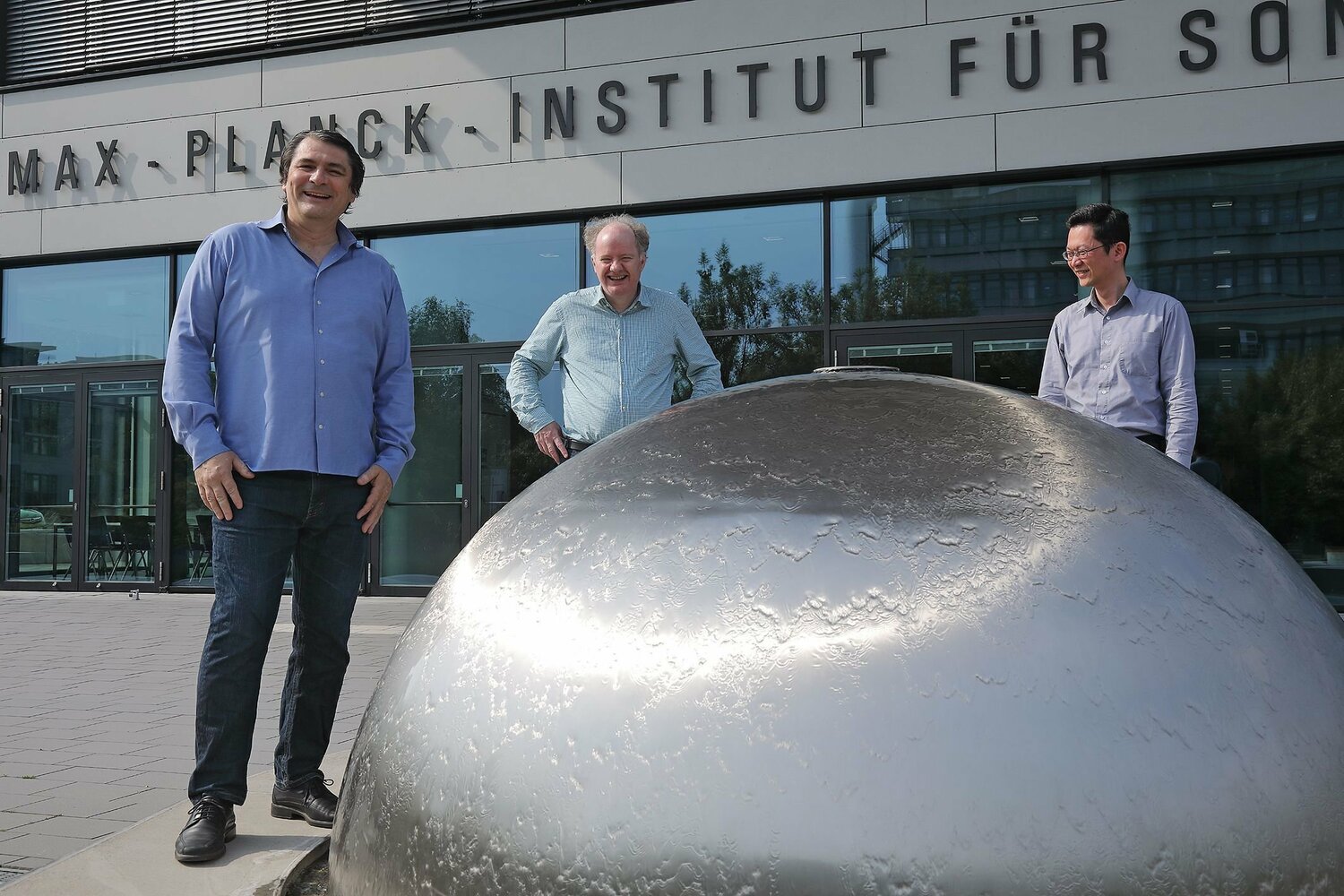