The Lower Saxony State Service for Cultural Heritage (NLD) and the University of Göttingen carry out research into the oldest wooden weapons that have ever been found. The project, under the leadership of Professor Thomas Terberger, NLD and Department of Prehistory and Early History, and Professor Holger Militz, Head of the Department of Wood Biology and Wood Products at the University of Göttingen, have been awarded a grant from the German Research Foundation (DFG) with funding of around €480,000. Over the next three years, an interdisciplinary team will use state-of-the-art imaging techniques to examine in detail the 300,000-year-old wooden objects from the internationally recognised Schöningen site in the Helmstedt district. This will enable them to learn more about the production processes and uses of these uniquely preserved weapons, as well as their context within the archaeological site.

The discovery of the oldest, remarkably well preserved wooden weapons in the Schöningen open-cast, brown coal mine dates back to excavations carried out by the Lower Saxony State Office for Heritage in the 1990s; since 2016, the excavation has been carried out by the University of Tübingen. Several spears and a lance revolutionised scientific understanding of the technical and intellectual abilities of early hominins in Europe. During the excavation, all wooden objects were recovered from the layer named the “spear horizon” of the Schöningen 13 II site, and this resulted in a unique inventory being made available for scientific analysis. The researchers intend to compile a complete inventory of all the manufactured wooden objects and a detailed documentation of all traces of production. Based on this, the function of the manufactured artefacts will be identified. Furthermore, it is essential to investigate the condition in which the wood arrived at the site and which processing steps were carried out there. The results of the project will be presented to the public via the Internet and displayed in the Schöningen Research Museum (Forschungsmuseum Schöningen) near the original site. The original spears can be viewed there. Further information can be found on the Internet at https://forschungsmuseum-schoeningen.de.

Department of Pre- and Protohistory

World-wide sensation: some of the wooden weapons, which are around 300,000 years old, are exhibited in the Schöningen Research Museum, where they can be viewed at close range 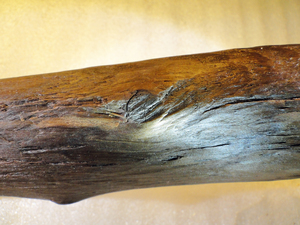 The excellently preserved surfaces allow the steps in the manufacture of the approximately 300,000 year-old wooden objects to be reconstructed exactly. 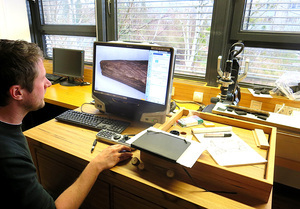 Tim Koddenberg from the Department of Wood Biology and Wood Products at the University of Göttingen examines the surface of a piece of wood with a high-resolution digital microscope. This makes it possible to analyse even the finest traces of processing.