Chemists at the University of Göttingen have developed new cytotoxic drugs which could revolutionise antibody-based tumour therapy approaches. The research team succeeded in modifying the natural product Duocarmycin into “prodrug” formats – which means that it only develops its effect once inside the tumour cell, thus reducing the likelihood of potential side effects on passage through the body. The University has entered into an exclusive licence agreement with the biotechnology company Iksuda Therapeutics for onward development and commercialisation in cancer therapeutics.

Antibody tumour therapies have enabled significant therapeutic benefits to patients suffering from cancer, autoimmune diseases and other serious diseases. However, many antibodies lack sufficient anti-tumour activity in the cell. This can be achieved by the use of antibody-drug conjugates (ADCs), where antibodies, which target specific cancer antigens, are armed with powerful cell-killing (cytotoxic) agents or ‘payloads’. ADCs have become powerful additions to the cancer treatment armoury, with several recent drug approvals and expanding clinical validation. However, most early-wave ADCs are associated with poor tolerability profiles, often due to a reduction in efficacy caused by the loss of the toxic payload whilst in circulation. Some programmes have failed as a result of low efficacy, where the payload is not active enough once inside the cell. ADC innovators, such as Iksuda, are working on the development of ADCs with a higher therapeutic index and finding safer ways to deliver potent cell-killing toxins. Iksuda has developed their own stable conjugation platform which reduces the risk of loss of efficacy.

One way to enhance both safety and efficacy of an ADC is to ensure that the payload is only released via tumour-activated mechanisms. With this approach, the precursors, called prodrugs, are able to release more potent payloads inside the cancer cell, with limited impact outside the cell.

The researchers at Göttingen University’s Institute for Organic and Biomolecular Chemistry, led by Professor Lutz Tietze, succeeded in developing leading prodrug technologies by further modifying the natural product Duocarmycin and combining it with protective sugar molecules. This means that the prodrugs formed are around a million times less toxic than the drug itself and the potent form is only activated in the cancer cell by an intrinsic enzyme. "This newly developed drug is one of the most toxic artificially produced compounds," explains Tietze. "It competes with the strongest toxins found in nature, but can be converted into a virtually non-toxic product simply by adding a sugar molecule." Dr David Simpson, CEO of Iksuda Therapeutics, adds: "Iksuda is delighted to license this novel,  potent and selective prodrug payload class, which we believe represents a powerful addition to the ADC field, enabling the development of a new generation of ADCs with enhanced therapeutic index."

The licence agreement between the University of Göttingen and Iksuda Therapeutics was negotiated by MBM ScienceBridge, a technology transfer organization owned fully by the University of Göttingen Public Law Foundation. MBM ScienceBridge acts on behalf of nine research institutions in Lower Saxony as a technology transfer interface to companies around the world. The IP portfolio managed by MBM ScienceBridge covers innovation in the areas of Life Sciences, Chemistry, Physics, Agriculture, Forestry and Medical Technologies.

Institute of Organic and Biomolecular Chemistry 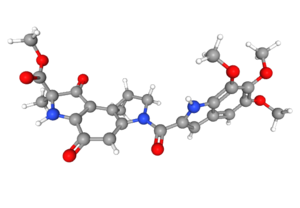 The research team worked on the natural product Duocarmycin.