Press release: Beetle larvae think with a brain ‘under construction’

In the human brain, hundreds of billions of nerve cells are interconnected in the most complicated way, and only when these interconnections are correctly made, can the brain function properly. This is no different for insects, even though their brains consist of ‘only’ one hundred thousand to one million nerve cells. Nevertheless, fascinating and unexpectedly complicated behaviour can be observed in insects, for example when rearing offspring in the bee hive or when mosquitoes search for blood. To a large extent, the brain develops in the embryo, but in many animals it is completed only after birth. Now, biologists from the University of Göttingen have found out that beetle larvae start using their brains, although still ‘under construction’. The results have been published in the journal PLOS Biology.

The biologists compared the development of the brains of flies and beetles, focusing on the "central complex" – a structure in the brain that insects need for their orientation in the environment. Using genetic engineering methods and genome editing, they first marked the same small group of nerve cells in both the fruit fly and the red flour beetle. This enabled them to follow the development of these cells from embryo to adult animal under the microscope and to compare the development between the animal species. Even before these investigations, it was known that part of the central complex is already formed in the beetle larvae, whereas in flies it only develops in the adult animal. It was thought that the completed development of this part was required to allow the beetle larva to walk; fly maggots do not need this part because they have no legs.

To their surprise, however, the scientists found that this part of the brain starts to work in the beetle larva, even though it has not yet reached a state similar to the adult animal. On the contrary – the structure corresponds to an embryonic stage of development known from other insects. The difference is that in the beetle larva the nerve cells of this brain ‘under construction’ are already forming connections, which probably helps the larva to orientate itself in its environment. "I had expected to find a miniature version of the adult central complex – but not that their ‘construction site’ would have started working," says Max Farnworth, first author and PhD student in Evolutionary Development Genetics at the University of Göttingen, expressing his surprise.

The second big surprise was that the sequence of the brain's developmental steps had changed in the beetle. Previously, it was thought that the developmental steps always proceeded in the same order – although the point in time when the step occurs may shift. This is known as ‘heterochrony’ in evolutionary biology. However, in the embryo of the beetle, some developmental steps changed their position to occur earlier in the series than in the fly. This was observed, for instance, with respect to the formation of crossings of nerve cells and the formation of synapses, while other steps took place later, just like in the fly.

"We have discovered the first example of a change in the developmental order in the brain, known as a ‘sequence heterochrony’,” explains senior author Professor Gregor Bucher, the Head of Evolutionary Developmental Genetics. “The development of insect brains is probably much more variable than we could have imagined. This could explain how they were able to adapt their brains in so many different ways to the demands of the environment.” 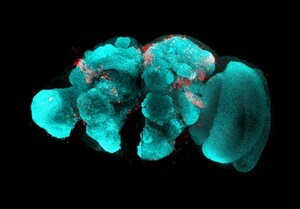 Image of the left half of the brain of the flour beetle (left hand side of image) compared with the right half of the brain of the fruit fly (right hand side of image). Similar structures can be observed, but they are of different sizes (e.g. the parts of the brain that process the signal from the eyes - each on the very outside, respectively). In beetle and fly the same nerve cells are stained with the gene retinal homeobox (red dots indicate the nuclei of the nerve cells). 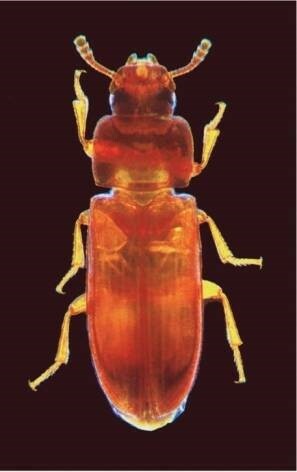 Red flour beetle Tribolium castaneum: the ‘central complex’ in the brain is already formed when still a larva and new research shows it even starts to function although still ‘under construction’.

Fruit fly Drosophila melanogaster: the ‘central complex’ in the brain develops as an adult. 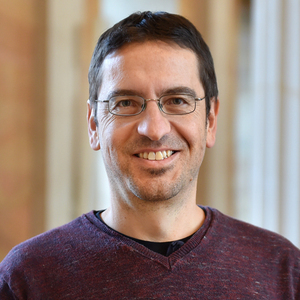