The almost 15-million-year-old Nördlinger Ries is an asteroid impact crater filled with lake sediments. Its structure is comparable to the craters currently being explored on Mars. In addition to various other deposits on the rim of the basin, the crater fill is mainly formed by stratified clay deposits. Unexpectedly, a research team led by the University of Göttingen has now discovered a volcanic ash layer in the asteroid crater. In addition, the team was able to show that the ground under the crater is sinking in the long term, which provides important insights for the exploration of craters on Mars, such as the ancient Gale and Jezero crater basin lakes, currently being explored by the NASA Curiosity and Perseverance Rovers. The results of the study have been published in the Journal of Geophysical Research Planets.

Until now, it was assumed that these lake deposits had settled on a stable crater floor. The same is assumed for crater deposits on Mars, although some of them show significantly inclined sediment strata. The layers of these crater fills appear on the surface as ring-shaped structures. However, a precise understanding of the underlying conditions and the temporal interrelationships of the deposits is important for reconstructing the chemical development of a crater lake and habitability for possible lifeforms that might have developed there in the past.

For the first time, the researchers have now been able to detect a volcanic ash layer in the lake sediments of the 330-metre-thick crater filling in the Ries. "This is surprising, as volcanic rocks were not expected here since the circular basin was identified as an asteroid crater," says first author Professor Gernot Arp from the Geosciences Centre at the University of Göttingen. "The ash was blown in from a volcano 760 kilometres further east in Hungary. The age of the ash can be dated to 14.2 million years ago," adds his colleague and co-author István Dunkl.

The ash, which in the meantime has transformed into nitrogen-rich silicate minerals, reveals a surprisingly strong bowl-shaped geometry: at the edge of the basin the ash is found at the current ground surface, while in the centre of the basin it comes to rest at a depth of about 220 metres. A subsequent systematic evaluation of drillings and geological mapping has now also revealed an arrangement of concentric rings – the “outcropping strata” – for the Ries crater filling, with the oldest deposits at the rim and the most recent in the centre.

Calculations show that this bedding geometry cannot be explained solely by the fact that the underlying lake sediments are settling. In fact, an additional subsidence of about 135 metres had to be accounted for. This can only be explained by subsidence phenomena of the crater bedrock, which is fractured kilometres deep. While further research is needed to explain the exact mechanisms of this subsidence of the crater floor, a simple model calculation can already show that subsidence of this magnitude is basically possible due to settlement phenomena of the fractured underground rocks. This means that inclined strata in the fillings of craters on Mars can now be better explained, at least for craters that show a close timely association of crater formation, flooding by water, and sedimentation.

The study was funded by the German Research Foundation (DFG). In addition to geobiologists and sedimentologists from the University of Göttingen, the Bavarian Environment Agency, and Brown University, Providence, USA, were also involved. 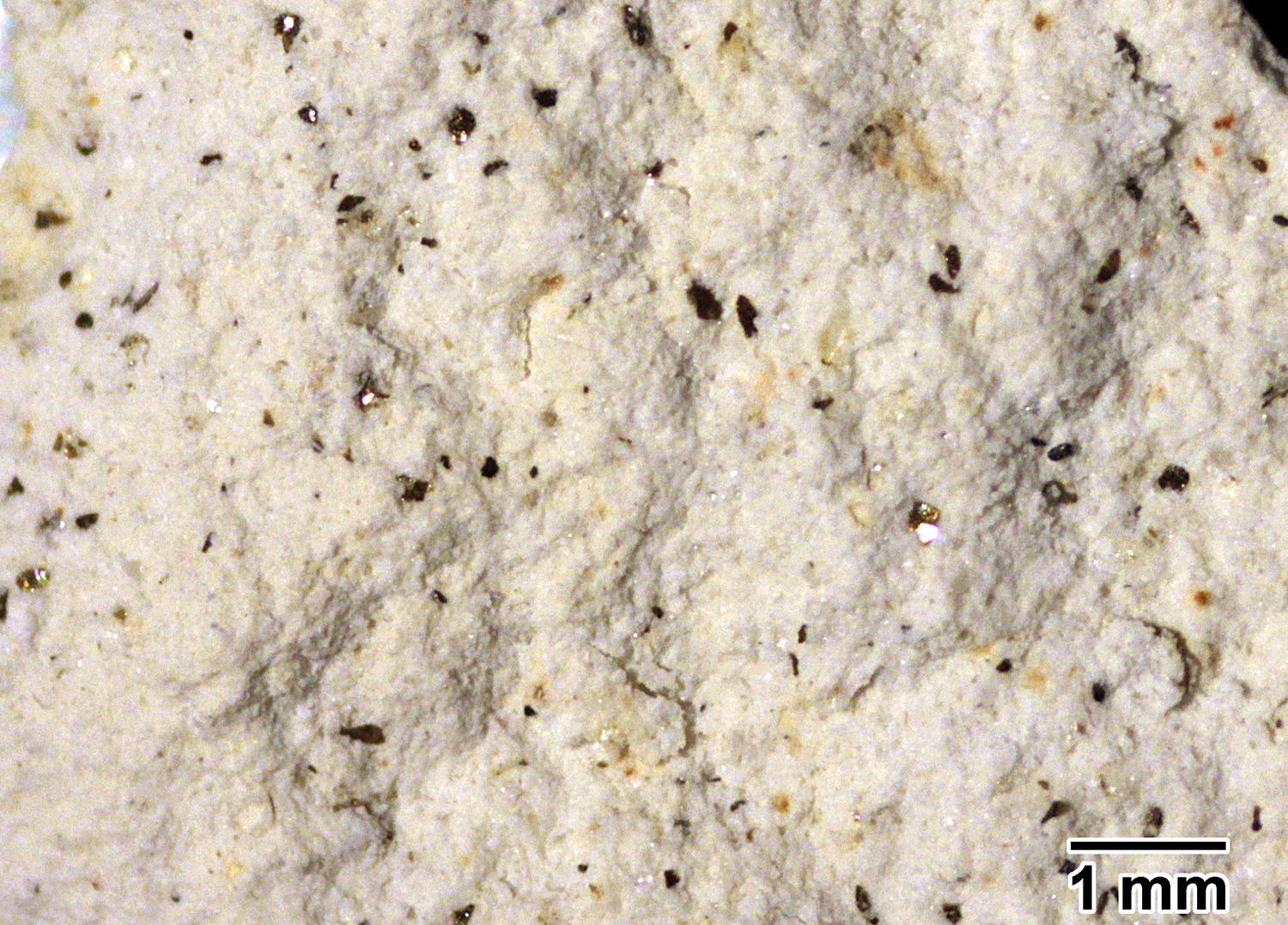 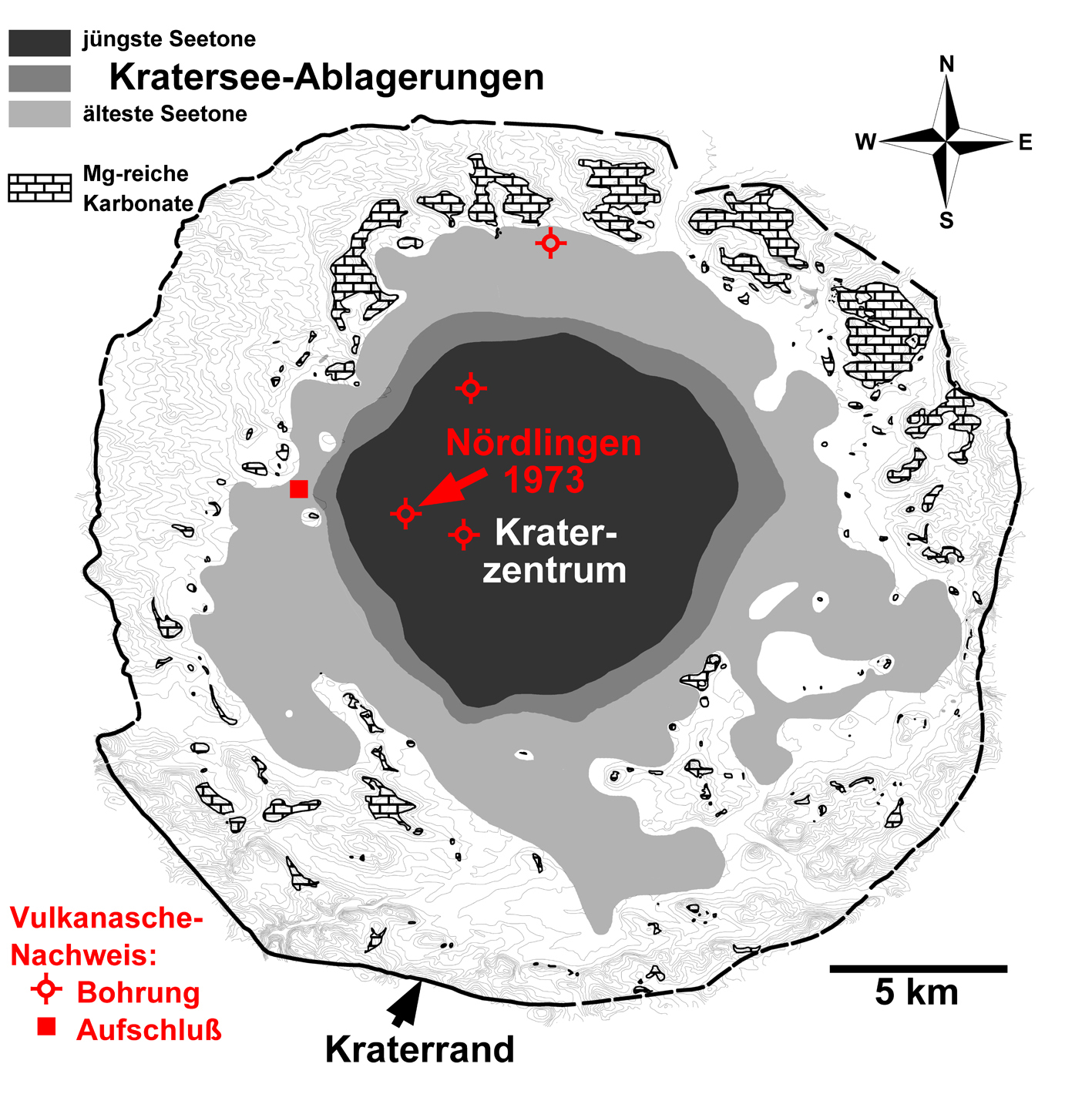 The concentric pattern of outcropping strata at the ground surface essentially reflects, besides of sediment compaction, a long-term sagging of the crater floor. 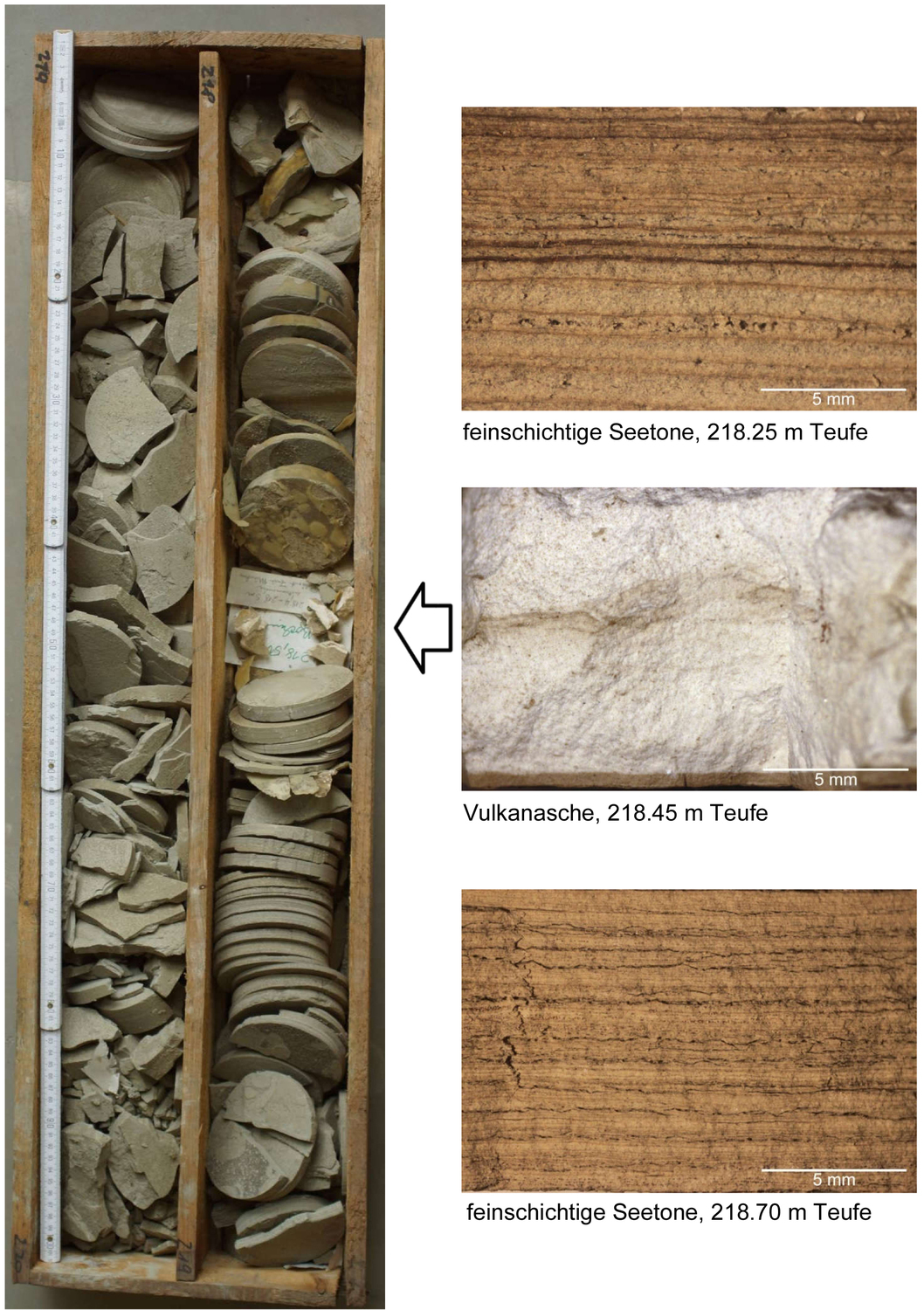 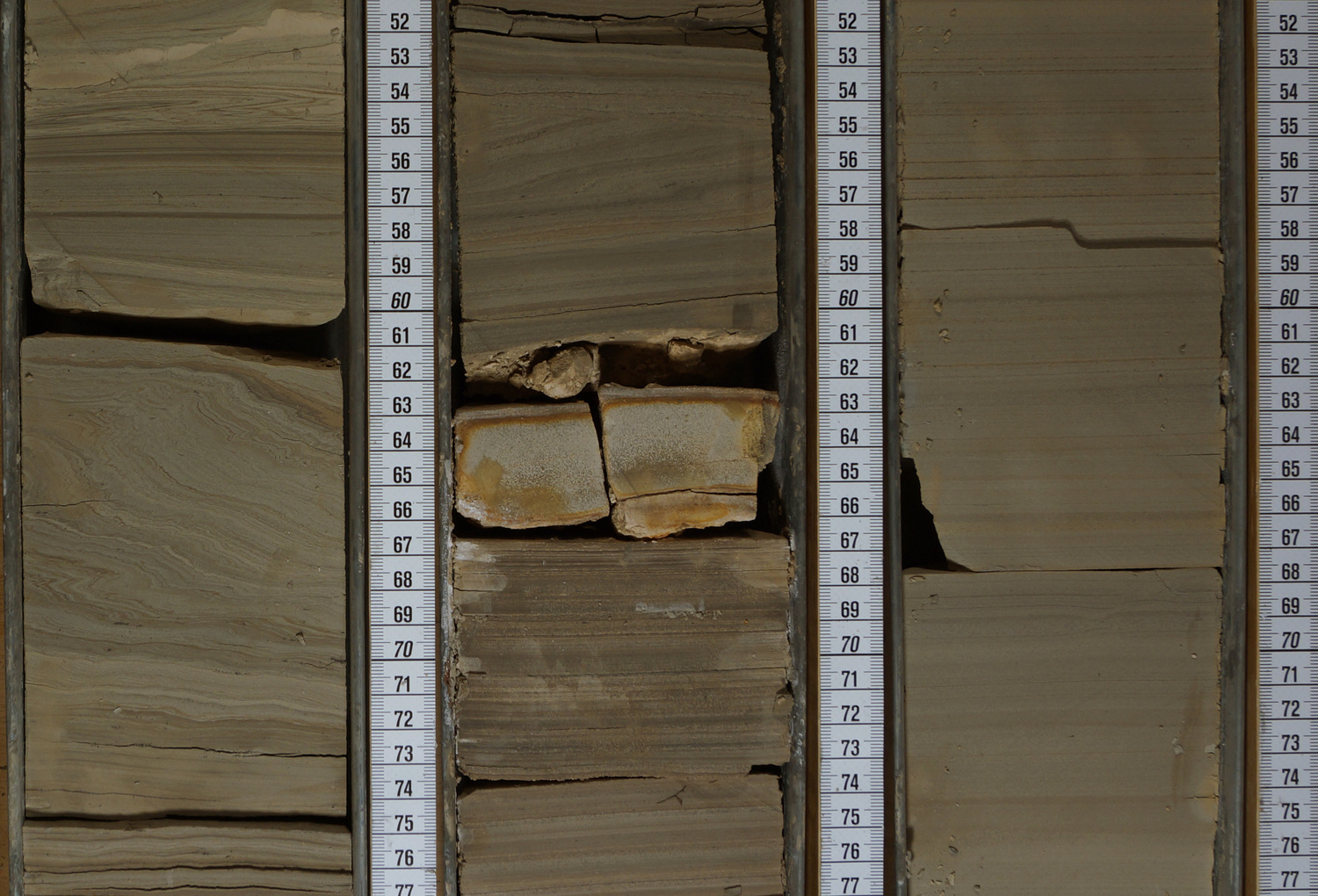 A further example of the light-coloured volcanic ash layer, embedded between finely stratified lake clays of the drilling Nördlinger Ries 1003. 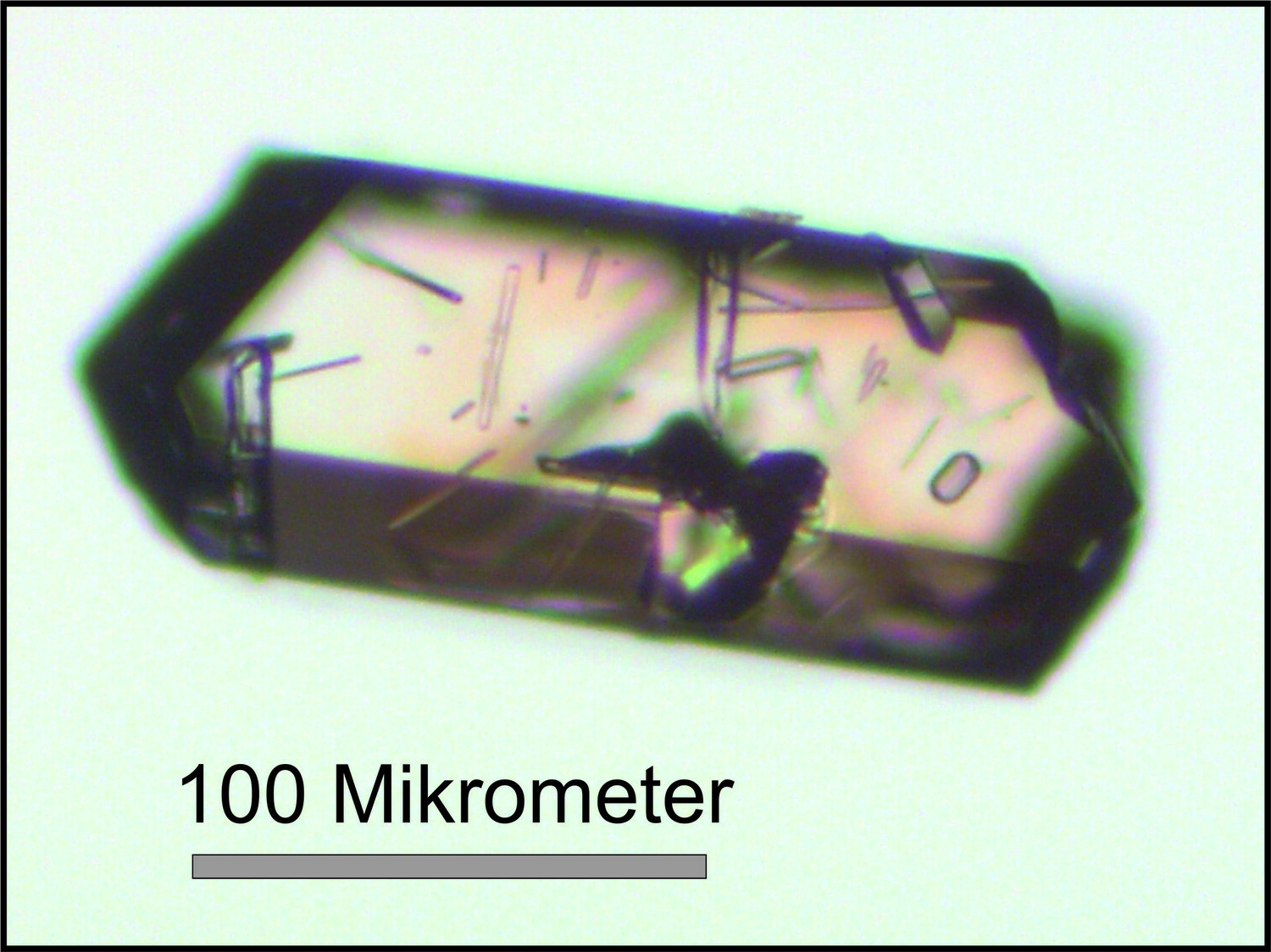 Example of a slightly pink zircon crystal of the volcanic ash layer, which could be dated to an age of 14.20 ± 0.08 million years using the uranium-lead method. 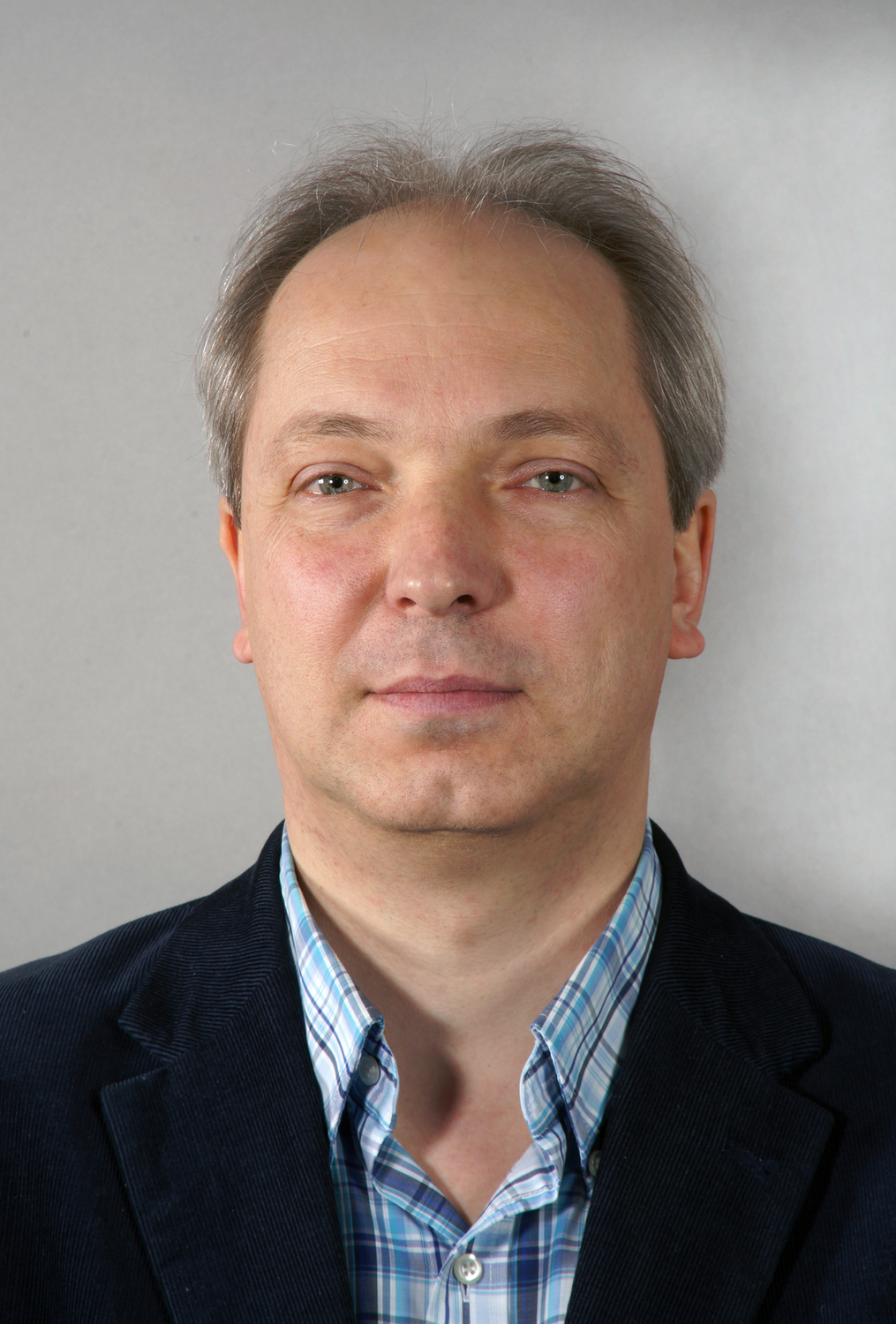