A new class of membranes has the potential to deliver highly interesting applications both in biotechnology and in water purification. The theoretical understanding of these polymer membranes is, however, still incomplete. Now, two researchers from Helmholtz-Zentrum Hereon and the University of Göttingen have found a ways to identify these gaps in understanding and also to resolve them. Their research was published in Chemical Reviews.

Whether in desalination, water purification or CO2 separation, membranes play a central role in technology. The Helmholtz-Zentrum Hereon has been working for several years on a new variant: it consists of special polymers that form pores of the same size on the nanometer scale. The materials to be separated, such as certain proteins, can literally slip through these pores. Because these separation layers are very thin and thus very fragile, they are bound to a spongey structure with much coarser pores, providing the structure with the necessary mechanical stability.

“A special aspect is that these structures form in an act of self-organization,” says Professor Volker Abetz, director of the Hereon Institute of Membrane Research and professor of physical chemistry at the University of Hamburg. “In contrast to comparable membranes, which are partially manufactured through a complex process using particle accelerators, this promises relatively inexpensive production.” Because the polymer membranes combine high throughput with strong separation selectivity, they could be interesting in the future for biotechnology and pharmaceutical production, but also in wastewater treatment, such as e.g., for filtering out unwanted dyes.

Experts have made considerable progress in the development of these new membranes in recent years. However, to tailor them for specific applications, a comprehensive theoretical understanding is still lacking. “So far, there has been a lot of trial and error as well as gut feeling involved,” says Abetz. “Now it should be about fundamentally understanding these systems as much as possible.” For this reason, Marcus Müller, professor of theoretical physics at the University of Göttingen and Volker Abetz have published a review article in the scientific journal Chemical Reviews. The work summarizes the current state of knowledge in the field of polymer membranes and identifies the most promising research approaches that can close existing gaps in knowledge.

Computer simulations play an important role here: they can be used to digitally model in detail what happens during the manufacturing process. “The problem is that these processes are exceedingly complex, and we are dealing with completely different length and time scales,” explains Müller. “And we have not yet been in the position to cover all of these scales with a single description.” There are, however, computer models that can simulate individual aspects. While some of these models describe the behavior of individual polymer molecules, others reproduce the membrane on a much coarser grid. These different approaches have so far only been rather weakly linked, and describing the time sequence of the various processes also poses a challenge. For a deeper understanding, it would be beneficial if the models were better interlinked than they are now.

“Polymer membrane production can be compared to making a soufflé,” says Müller. “Both are about stabilizing the tiny pores that matter, before the entire thing collapses again.” One of the aspects that is unclear is how and if the simultaneous formation of the separation layer and carrier layer influence each other and how this can be controlled. Another question concerns how the pores can be arranged and aligned in such a way that they allow the highest possible flow rate through the membrane – a decisive criterion for the membrane’s profitability. “Fortunately, both computers and models are getting better and better, and that should facilitate considerable progress,” Müller adds. “We can access the JUWELS supercomputer in Jülich, which is one of the fastest in the world.” Machine learning algorithms could also possibly help in the future; there could be undiscovered potential here.

Not only theory is required, however. There is also work to be done in the experiments. “One big unknown, for example, is the humidity,” explains Abetz. “We know that it can decisively influence the formation of a polymer membrane. But in order to better understand this influence, we need systematic tests.” If hurdles like these can be overcome, it will bring the long-term research aim a little closer: “Our dream is to design and optimize a polymer membrane for a specific application as a “digital twin” on the computer first so that it can later be produced in a targeted manner in the laboratory,” says Abetz. “And perhaps we could even discover entirely new structures on the computer, ones that we never would have encountered in the experiment." 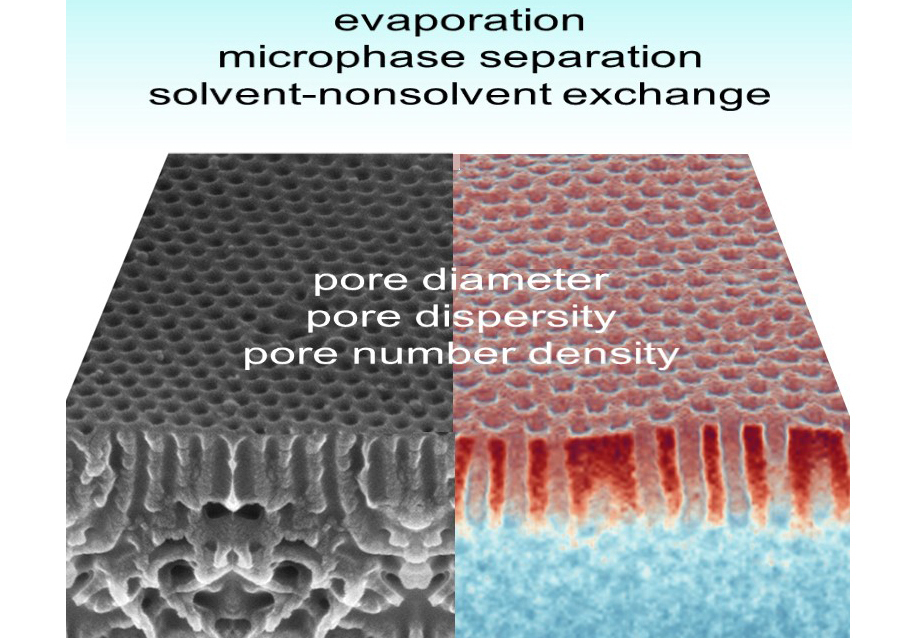