Since the discovery of the first fossil remains in the 19th century, the image of the Neanderthal has been one of a primitive hominin. People have known for a long time that Neanderthals were able to effectively fashion tools and weapons. But could they also make ornaments, jewellery or even art? A research team led by the University of Göttingen and the Lower Saxony State Office for Heritage has analysed a new find from the Unicorn Cave (Einhornhöhle) in the Harz Mountains. The researchers conclude that, in fact, Neanderthals, genetically the closest relative to modern humans, had remarkable cognitive abilities. The results of the study were published in Nature Ecology and Evolution.

Working with the Unicornu Fossile society, the scientists have been carrying out new excavations at the Unicorn Cave in the Harz Mountains since 2019. For the first time, they succeeded in uncovering well-preserved layers of cultural artefacts from the Neanderthal period in the cave's ruined entrance area. Among the preserved remains from a hunt, an inconspicuous foot bone turned out to be a sensational discovery. After removing the soil sticking to the bone, an angular pattern of six notches was revealed. "We quickly realised that these were not marks made from butchering the animal but were clearly decorative," says the excavation leader Dr Dirk Leder of the Lower Saxony State Office for Heritage. The carved notches could then be analysed with 3D microscopy at the Department of Wood Biology and Wood Products at Göttingen University.

To make a scientific comparison, the team carried out experiments with the foot bones of today's cattle. They showed that the bone probably had to be boiled first in order to carve the pattern into the softened bone surface with stone tools and the work would take about 1.5 hours. The small ancient foot bone that had been discovered was identified as coming from a giant deer (Megaloceros giganteus). "It is probably no coincidence that the Neanderthal chose the bone of an impressive animal with huge antlers for his or her carving," says Professor Antje Schwalb from the Technical University of Braunschweig, who is involved in the project.

The team of Leibniz laboratory at Kiel University dated the carved bone at over 51,000 years using radiocarbon dating technology. This is the first time that anyone has successfully directly dated an object that must have been carved by Neanderthals. Until now, a few ornamental objects from the time of the last Neanderthals in France were known. However, these finds, which are about 40,000 years old, are considered by many to be copies of pendants made by anatomically modern humans because by this time they had already spread to parts of Europe. Decorative objects and small ivory sculptures have survived from cave sites of modern humans on the Swabian Alb in Baden-Württemberg and these were found at about the same time.

"The fact that the new find from the Unicorn Cave dates from so long ago shows that Neanderthals were already able to independently produce patterns on bones and probably also communicate using symbols thousands of years before the arrival of modern humans in Europe," says project leader Professor Thomas Terberger from Göttingen University’s Department for Prehistory and Early History, and the Lower Saxony State Office for Heritage. "This means that the creative talents of the Neanderthals must have developed independently. The bone from the Unicorn Cave thus represents the oldest decorated object in Lower Saxony and one of the most important finds from the Neanderthal period in Central Europe."

Lower Saxony's Minister of Science Björn Thümler says: "Lower Saxony's archaeologists are always making discoveries that rewrite the history books. Now, research in the Unicorn Cave has revealed that the Neanderthals produced elaborate designs even before the arrival of modern humans - yet another important new finding that completely revises our picture of prehistory."

University of Göttingen – Department for Prehistory and Early History

The Einhornhöhle (Unicorn Cave), Blaue Grotto. In the Middle Ages, animal bones from the ice-age were found, which treasure hunters mistook for unicorn bones and sold as possessing medicinal properties, hence the name “Unicorn Cave”. Since the discovery of the first stone tools from the Neanderthal period in 1985, archaeo-palaeontological excavations have been carried out in and in front of the cave. 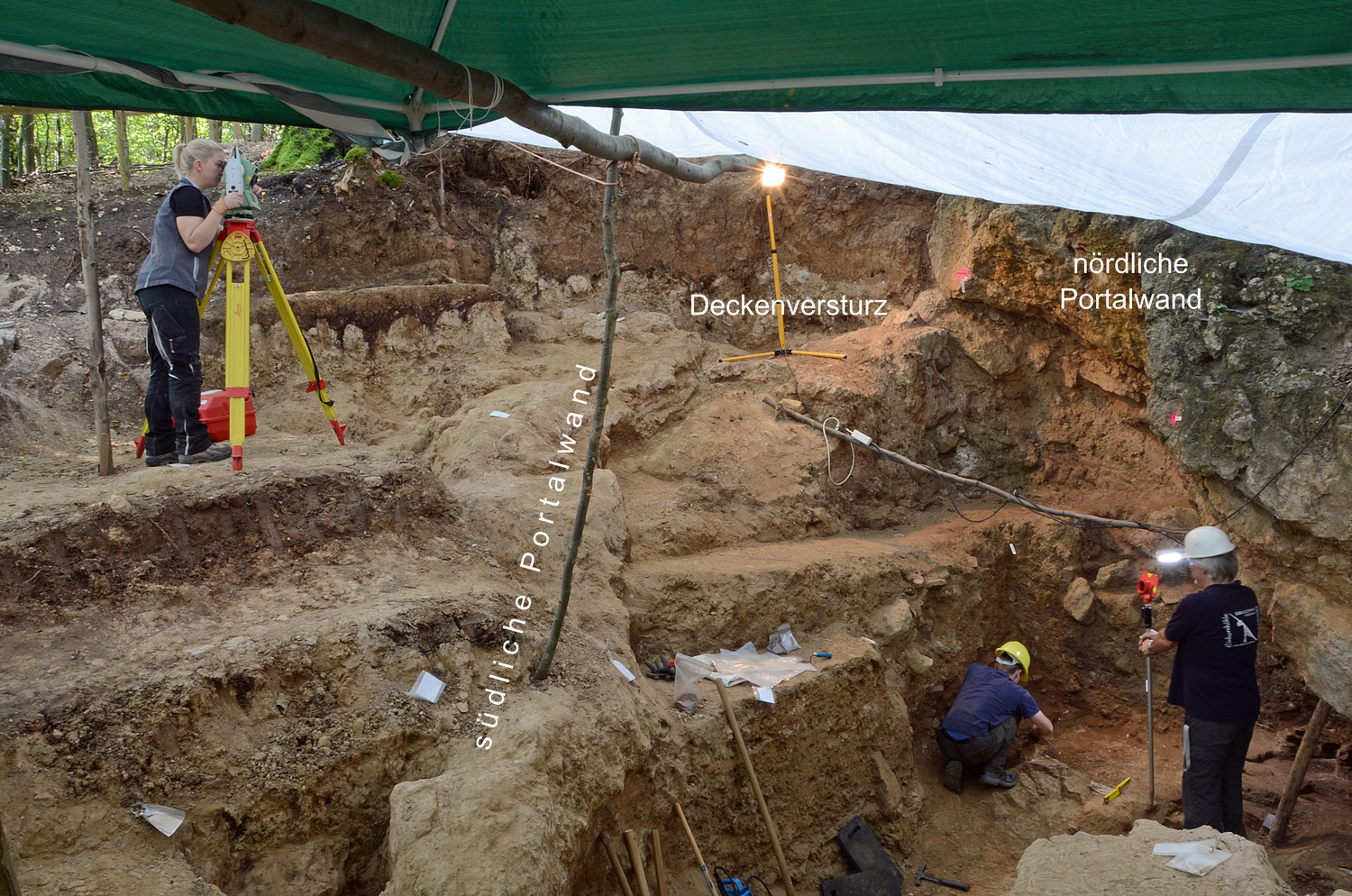 The excavations in the fallen entrance area of the cave in 2019. The partially eroded south wall (marked "südliche Portalwand" on the image), and the well-preserved north wall ("nördliche Portalwand") are clearly visible, while the cave roof has fallen. The decorated bone was found in layers of earth under the north wall. 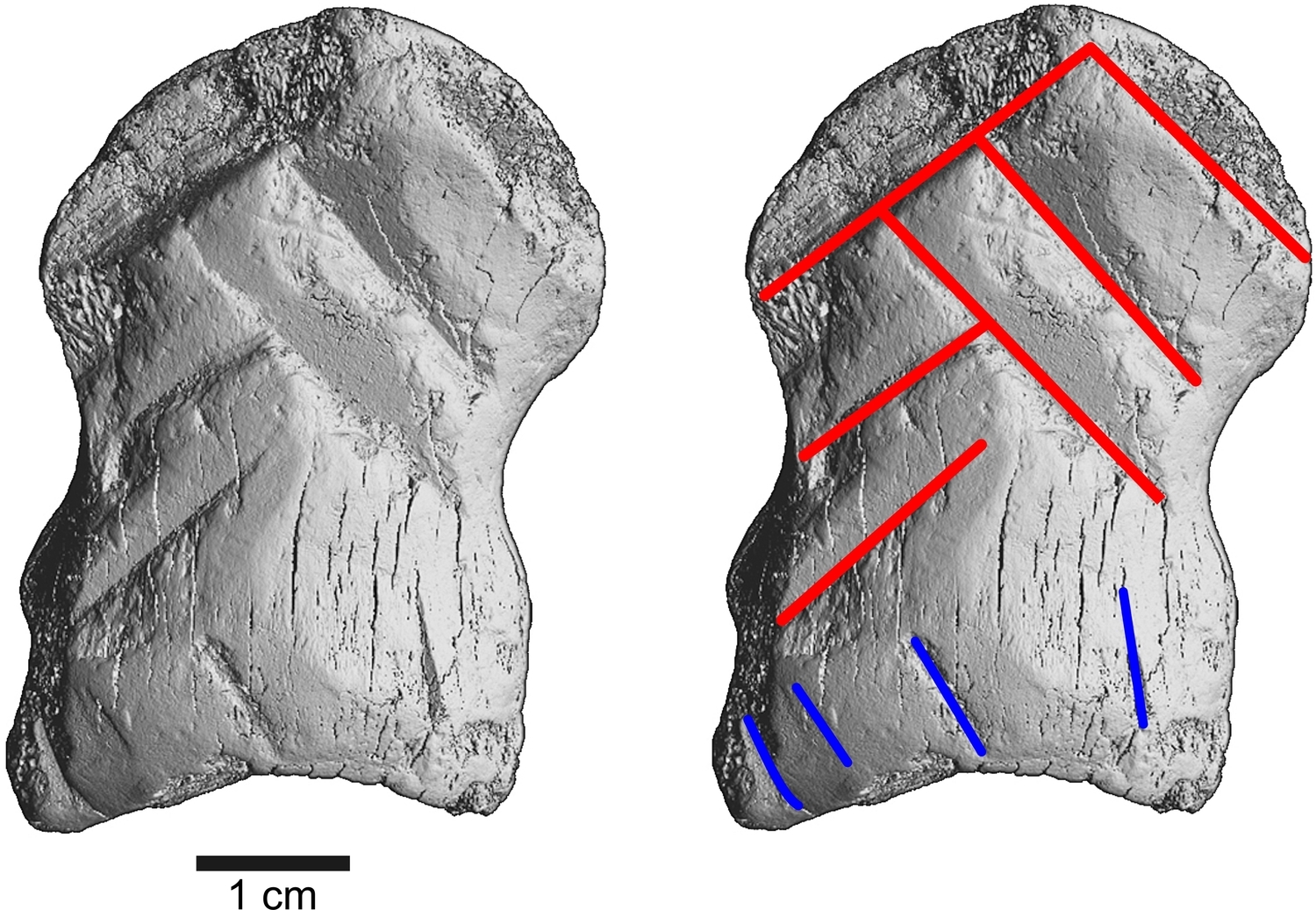 microCT scan with marking of the notches. Marked in red are the six notches that create the angular pattern, marked in blue are accompanying notches.