Long-period oscillations of the Sun discovered

(mps) A team of solar physicists led by Professor Laurent Gizon of the Max Planck Institute for Solar System Research (MPS) and the University of Göttingen in Germany has reported the discovery of global oscillations of the Sun with very long periods, comparable to the 27-day solar rotation period. The oscillations manifest themselves at the solar surface as swirling motions with speeds on the order of five kilometers per hour. These motions were measured by analyzing ten years of observations from NASA’s Solar Dynamics Observatory (SDO). Using computer models, the scientists have shown that the newly discovered oscillations are resonant modes and owe their existence to the Sun’s differential rotation. The oscillations will help establish novel ways to probe the Sun’s interior and obtain information about our star’s inner structure and dynamics. The scientists describe their findings in a letter in the journal Astronomy & Astrophysics.

In the 1960’s the Sun’s high musical notes were discovered: The Sun rings like a bell. Millions of modes of acoustic oscillations with short periods, near five minutes, are excited by convective turbulence near the solar surface and are trapped in the solar interior. These five-minute oscillations have been observed continuously by ground-based telescopes and space observatories since the mid 1990’s and have been used very successfully by helioseismologists to learn about the internal structure and dynamics of our star – just like seismologists learn about the interior of the Earth by studying earthquakes. One of the triumphs of helioseismology is to have mapped the Sun’s rotation as a function of depth and latitude (the solar differential rotation).

The team observed many tens of modes of oscillation, each with its own oscillation period and spatial dependence. Some modes of oscillation have maximum velocity at the poles, some at mid-latitudes, and some near the equator. The modes with maximum velocity near the equator are Rossby modes, which the team had already identified in 2018. “The long-period oscillations manifest themselves as very slow swirling motions at the surface of the Sun with speeds of about 5 kilometers per hour – about how fast a person walks”, says Dr Zhi-Chao Liang from MPS. Dr Kiran Jain from NSO, together with Dr B. Lekshmi and Dr Bastian Proxauf from MPS, confirmed the results with data from the Global Oscillation Network Group (GONG), a network of six solar observatories in the USA, Australia, India, Spain, and Chile.

To identify the nature of these oscillations, the team compared the observational data to computer models. “The models allow us to look inside the Sun’s interior and determine the full three-dimensional structure of the oscillations”, explains MPS graduate student Yuto Bekki. To obtain the model oscillations, the team began with a model of the Sun’s structure and differential rotation inferred from helioseismology. In addition, the strength of the convective driving in the upper layers, and the amplitude of turbulent motions are accounted for in the model. The free oscillations of the model are found by considering small-amplitude perturbations to the solar model. The corresponding velocities at the surface are a good match to the observed oscillations and enabled the team to identify the modes.

“All of these new oscillations we observe on the Sun are strongly affected by the Sun’s differential rotation”, says MPS scientist Dr Damien Fournier. The dependence of the solar rotation with latitude determines where the modes have maximum amplitudes. “The oscillations are also sensitive to properties of the Sun’s interior: in particular to the strength of the turbulent motions and the related viscosity of the solar medium, as well as to the strength of the convective driving,” says Dr Robert Cameron from MPS. This sensitivity is strong at the base of the convection zone, about two hundred thousand kilometers beneath the solar surface. “Just like we are using acoustic oscillations to learn about the sound speed in the solar interior with helioseismology, we can use the long-period oscillations to learn about the turbulent processes”, he adds.

“The discovery of a new type of solar oscillations is very exciting because it allows us to infer properties, such as the strength of the convective driving, which ultimately control the solar dynamo”, says Gizon. The diagnostic potential of the long-period modes will be fully realized in the coming years using a new exascale computer model being developed as part of the project WHOLESUN, supported by a European Research Council 2018 Synergy Grant.

Videos can be found at www.mps.mpg.de/long-period-oscillations-of-the-sun-discovered?c=6775. 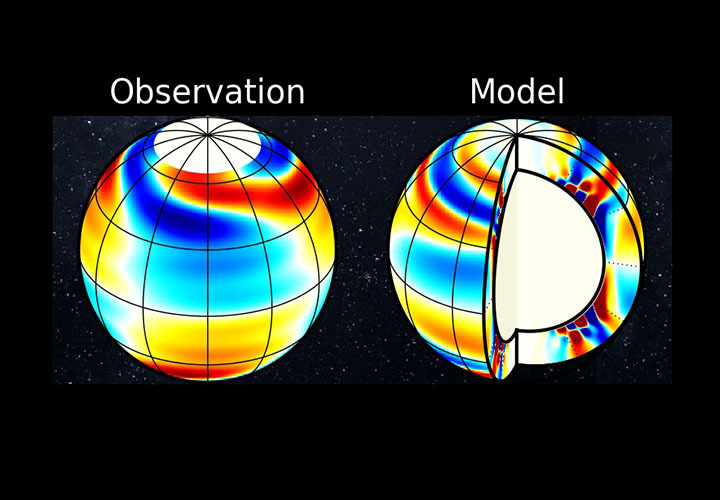