Using the European Southern Observatory’s Very Large Telescope (ESO’s VLT), astronomers including the University of Göttingen have discovered a small black hole outside the Milky Way by looking at how it influences the motion of a nearby star. This is the first time this detection method has been used to reveal the presence of a black hole outside our galaxy. The method could be key to finding hidden black holes in the Milky Way and nearby galaxies, and to help shed light on how these mysterious objects form and evolve. The research was published in the Monthly Notices of the Royal Astronomical Society.

Researchers used data collected over two years with the Multi Unit Spectroscopic Explorer (MUSE) mounted at ESO’s VLT, located in the Chilean Atacama Desert. Using MUSE meant they could observe very crowded areas, analysing the light of every single star in the vicinity. This led to the collection of information about thousands of stars in one go, at least 10 times more than with any other instrument. That enabled the team to spot the odd star out whose peculiar motion signalled the presence of the black hole. Data from the University of Warsaw’s Optical Gravitational Lensing Experiment and from the NASA/ESA Hubble Space Telescope enabled them to measure the mass of the black hole and confirm their findings.

The newly found black hole was spotted lurking in NGC 1850, a cluster of thousands of stars roughly 160,000 light-years away in the Large Magellanic Cloud, a neighbouring galaxy of the Milky Way. Although it is small for a black hole, it is roughly 11 times as massive as our Sun. The clue that gave it away was its gravitational influence on the star, five times the mass of the Sun, and orbiting the black hole.

Astronomers have previously spotted such black holes in other galaxies from the X-ray glow emitted as they swallow matter, or from the gravitational waves generated from the collision of black holes with each other or with neutron stars. However, most small black holes don’t give away their presence through X-rays or gravitational waves. “The vast majority can only be discovered using a ‘dynamical’ method like this,” says Professor Stefan Dreizler, University of Göttingen. “When black holes form a system together with a star, they will affect its motion in a subtle but detectable way, so we can find them using sophisticated instruments.”

The detection in NGC 1850 marks the first time a black hole has been found in a relatively young cluster of stars – the cluster is only around 100 million years old, a blink of an eye on astronomical scales! Using the dynamical method in similar star clusters could unveil even more black holes and shed new light on how they evolve. By comparing them with larger, more mature black holes in older clusters, astronomers will be able to understand how these objects grow by feeding on stars or merging with other black holes. Furthermore, charting the demographics of black holes in star clusters improves our understanding of the origin of gravitational wave sources. ESO’s Extremely Large Telescope in Chile, set to start operating later this decade, will allow astronomers to find even more hidden black holes. 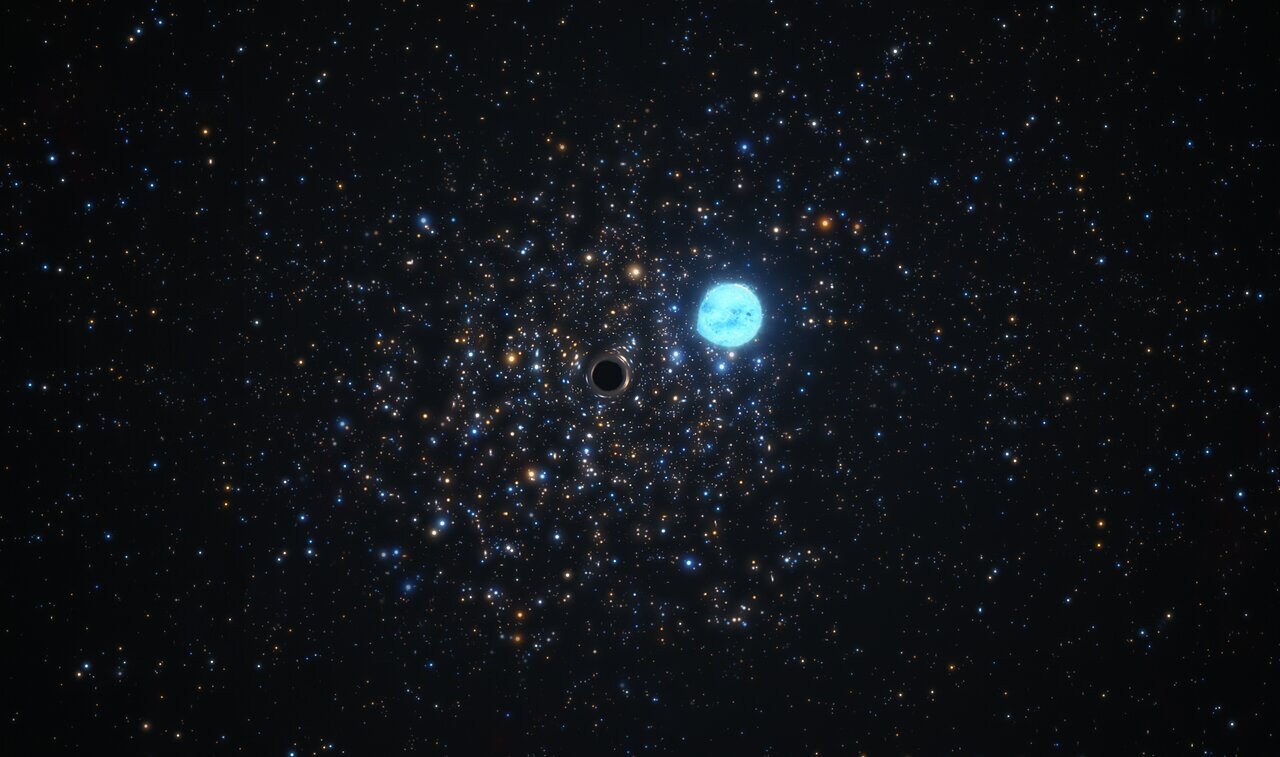 Artist’s impression of the black hole in NGC 1850. Distorting its companion star, it is a compact black hole 11 times as massive as the Sun and the five-solar-mass star orbiting it. The two objects are located in NGC 1850, a cluster of thousands of stars roughly 160 000 light-years away in the Large Magellanic Cloud, a Milky Way neighbour. The distortion of the star’s shape is due to the strong gravitational force exerted by the black hole. 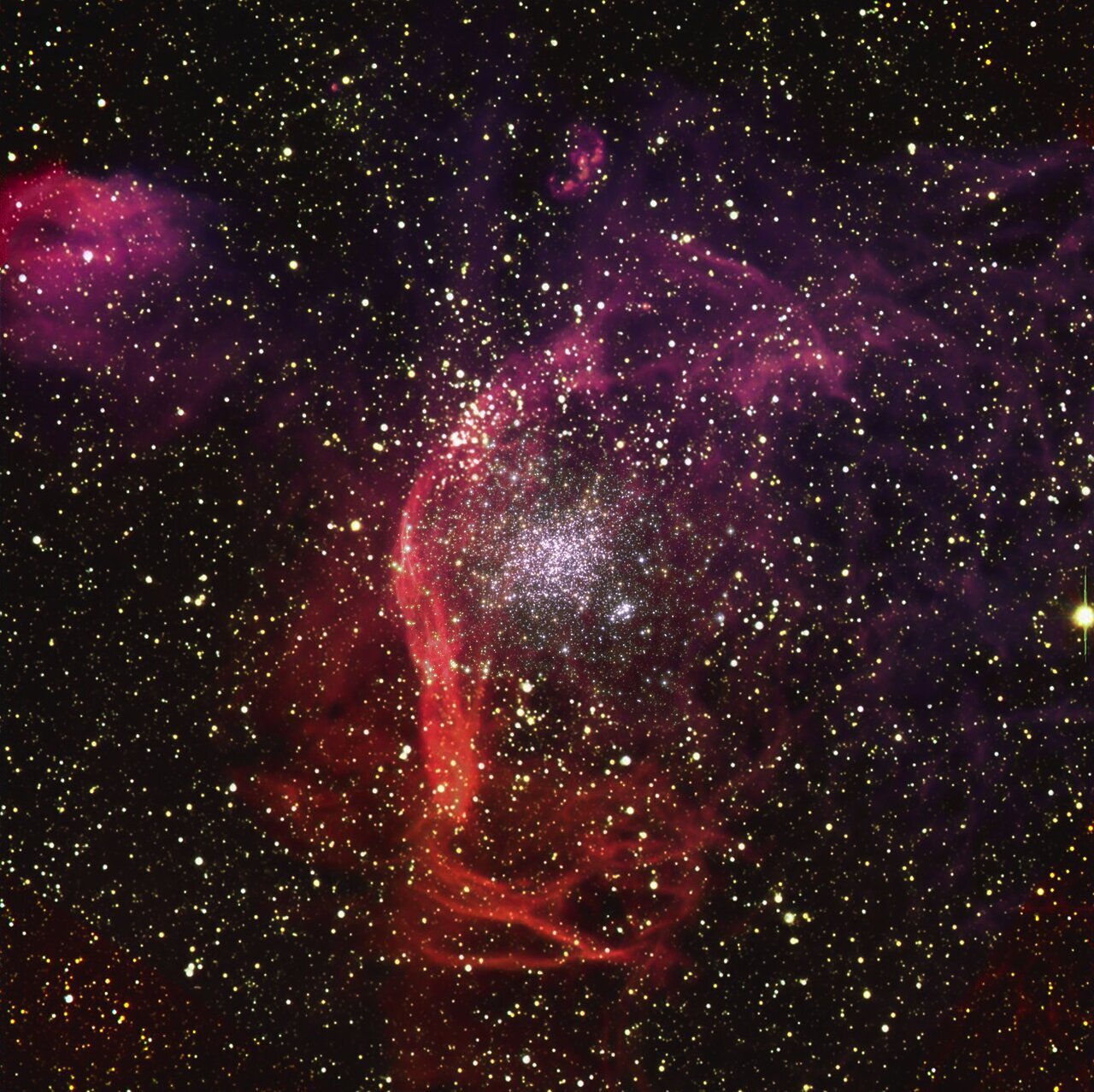 NGC1850 as seen with the Very Large Telescope and Hubble: NGC1850, a cluster of thousands of stars roughly 160,000 light-years away in the Large Magellanic Cloud, a Milky Way neighbour. The reddish filaments surrounding the cluster, made of vast clouds of hydrogen, are believed to be the remnants of supernova explosions. 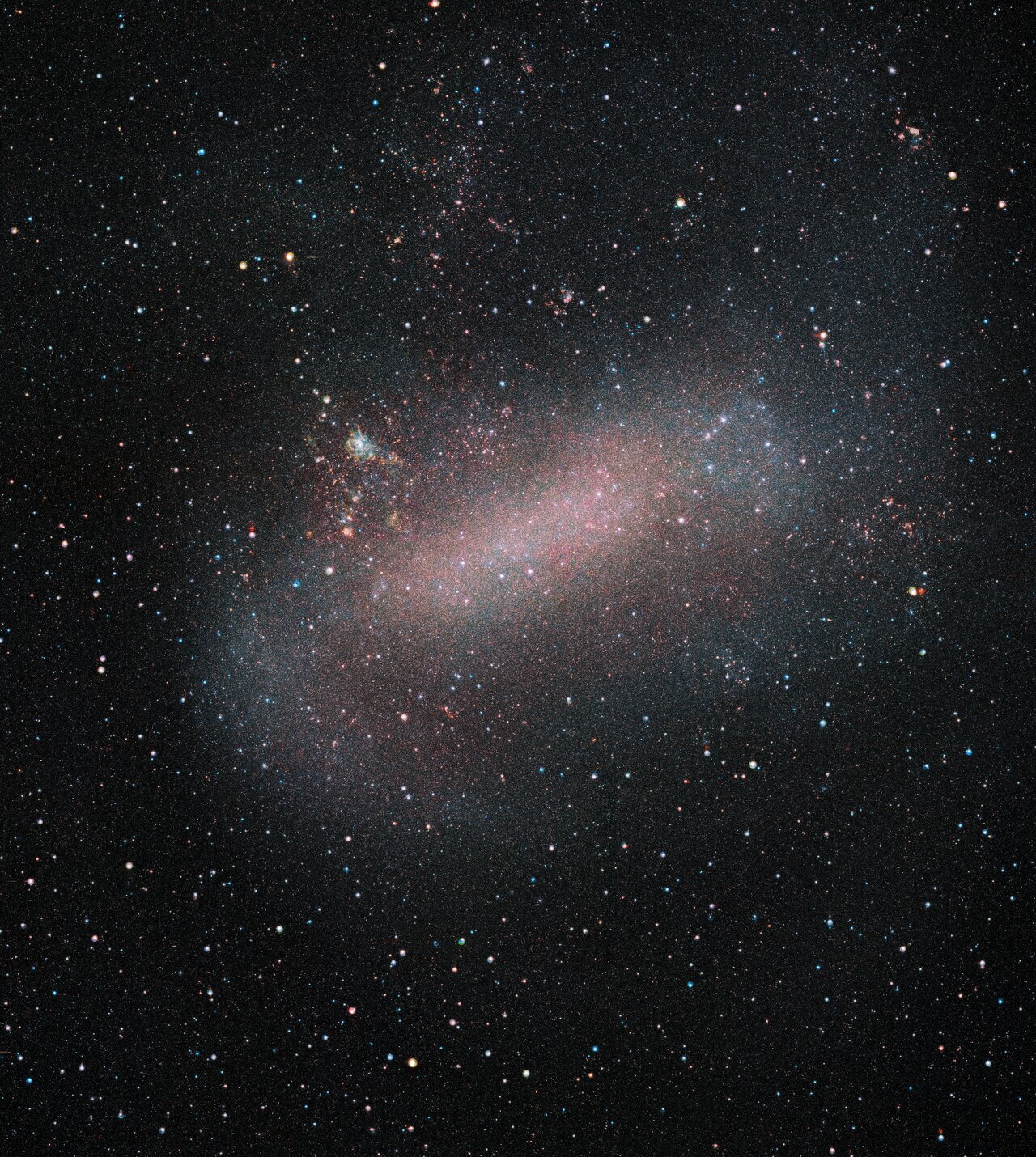 The Large Magellanic Cloud revealed by VISTA, one of our nearest galactic neighbours. VISTA has been surveying this galaxy and its sibling the Small Magellanic Cloud, as well as their surroundings, in unprecedented detail. This survey allows astronomers to observe a large number of stars, opening up new opportunities to study stellar evolution, galactic dynamics, and variable stars. 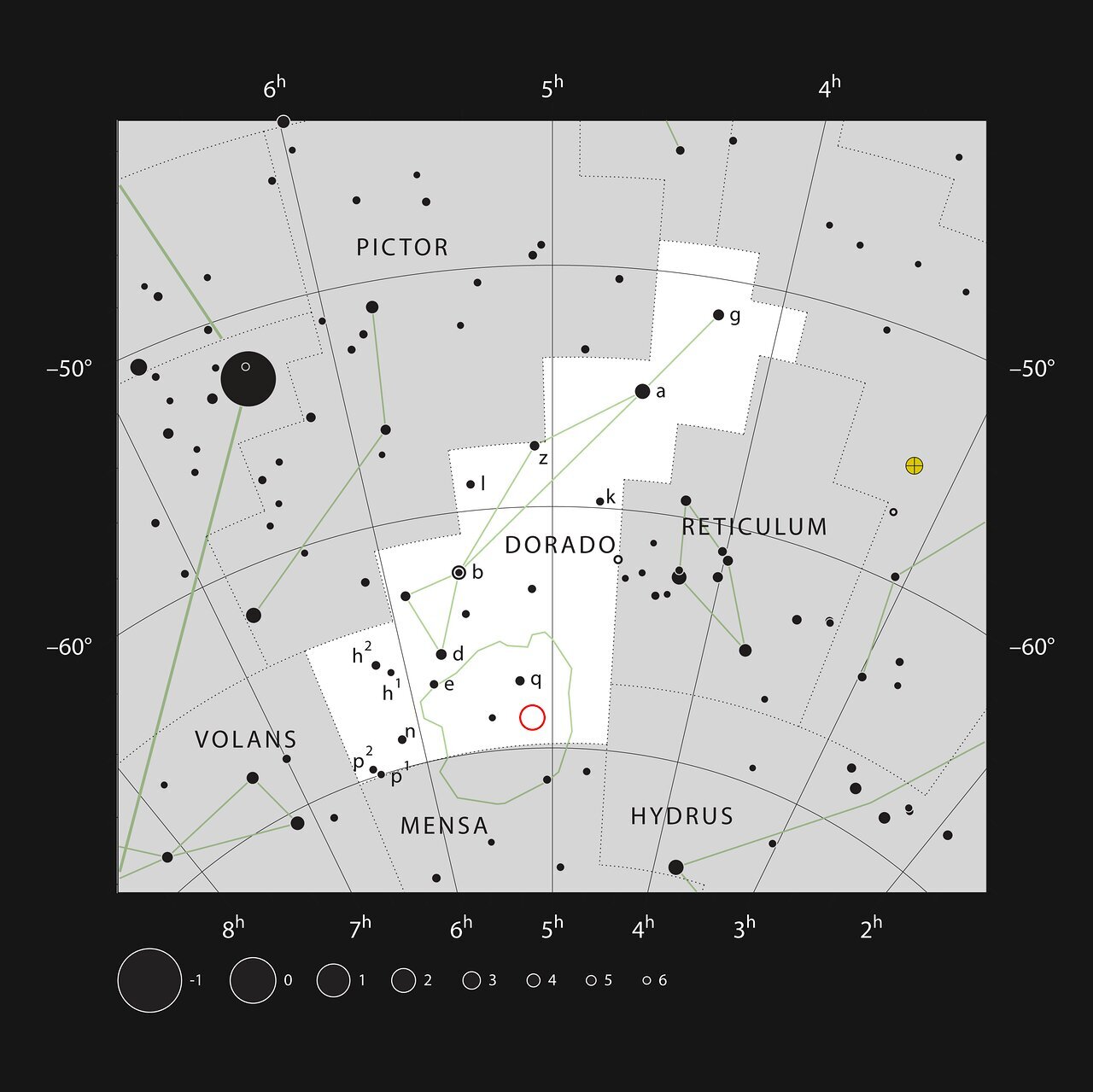 Location of the NGC 1850 cluster in the constellation Dorado shown in a chart mapping the southern constellation Dorado and other stars in that region of the sky, most of which can be seen with the naked eye on a clear dark night. NGC 1850 — a cluster of thousands of stars roughly 160,000 light-years away in the Large Magellanic Cloud, a Milky Way neighbour — is marked with a red circle.