What changes occur in parts of the brain affected by neurodegenerative disease? How does the structure of the neurons change? Some pathological changes in the tissue are easy to identify using standard microscopy. For example, the protein deposits known as “plaques”, which occur in Alzheimer's disease, can be seen with staining techniques. However, pathological changes can also be of a more subtle nature and easily missed unless there is a complete digitilisation and analysis of the three-dimensional structure. Researchers at the University of Göttingen and University Medical Center Göttingen have now found a new technique to measure and quantify neuronal tissue architecture in three dimensions and at high resolution, which enabled them to identify changes in neurons in Alzheimer’s. The results were published in the Proceedings of the National Academy of Sciences (PNAS).

The team developed a special X-ray imaging method that enabled them to detect a previously unknown transition in neuronal cell nuclei in tissue samples from the hippocampus of Alzheimer's patients. The changes indicate altered activity of neurons. The scientists examined neuronal tissue from the hippocampus, a brain region where memories are transferred from short-term to long-term memory. Chemically fixed tissue samples just a few millimetres wide were first X-rayed using phase-contrast tomography. The researchers used a special phase-contrast tomograph, which the team, led by Professor Tim Salditt from the Institute of X-ray Physics at the University of Göttingen, has set up at the PETRA III storage ring at the German Electron Synchrotron (DESY). The tomograph can be used to image tissue that only weakly absorbs X-rays, or not at all. This meant that large volumes of tissue could be recorded in their entirety, without damaging the samples and without time-consuming preparation.

"To do this, the three-dimensional image from highly magnified projections must first be focused on the computer using special algorithms in order to obtain a three-dimensional image with pixel sizes in the range of one ten-thousandth of a millimetre," explains Marina Eckermann, first author of the paper. Using this "digital twin" of the sample, machine learning can then be used to identify neurons – excitable cells that use electrical impulses and chemical signals to send information between different areas of the brain. Using new mathematical methods from “optimal transport theory”, developed by Professor Bernhard Schmitzer at the Institute of Computer Science at the University of Göttingen, the cell population of different individuals could be compared with each other without having to define which hypotheses were being used or whether the samples belonged to a particular patient group. The comparison of the structural features did not just refer to the average values of the corresponding neurons, but to every single one of the detected cells of each individual.

"These new results show that in Alzheimer’s disease, the cell nuclei in a subsection in the hippocampus change into being more compact and having more of a mixture of different structures," says Professor Tim Salditt from Göttingen University. "This leads to a higher proportion of densely packed DNA in the cell nucleus and to DNA being read out less frequently. Whether the observed changes in the cell nucleus also play a causal role in development of the disease remains to be seen," explains Professor Christine Stadelmann-Nessler, Director of the Institute of Neuropathology at the University Medical Center Göttingen.

This research was made possible thanks to an interdisciplinary collaboration between the Cluster of Excellence Multiscale Bioimaging and the Collaborative Research Centre “Mathematics of Experiment” at Göttingen University funded by the German Research Foundation (DFG). 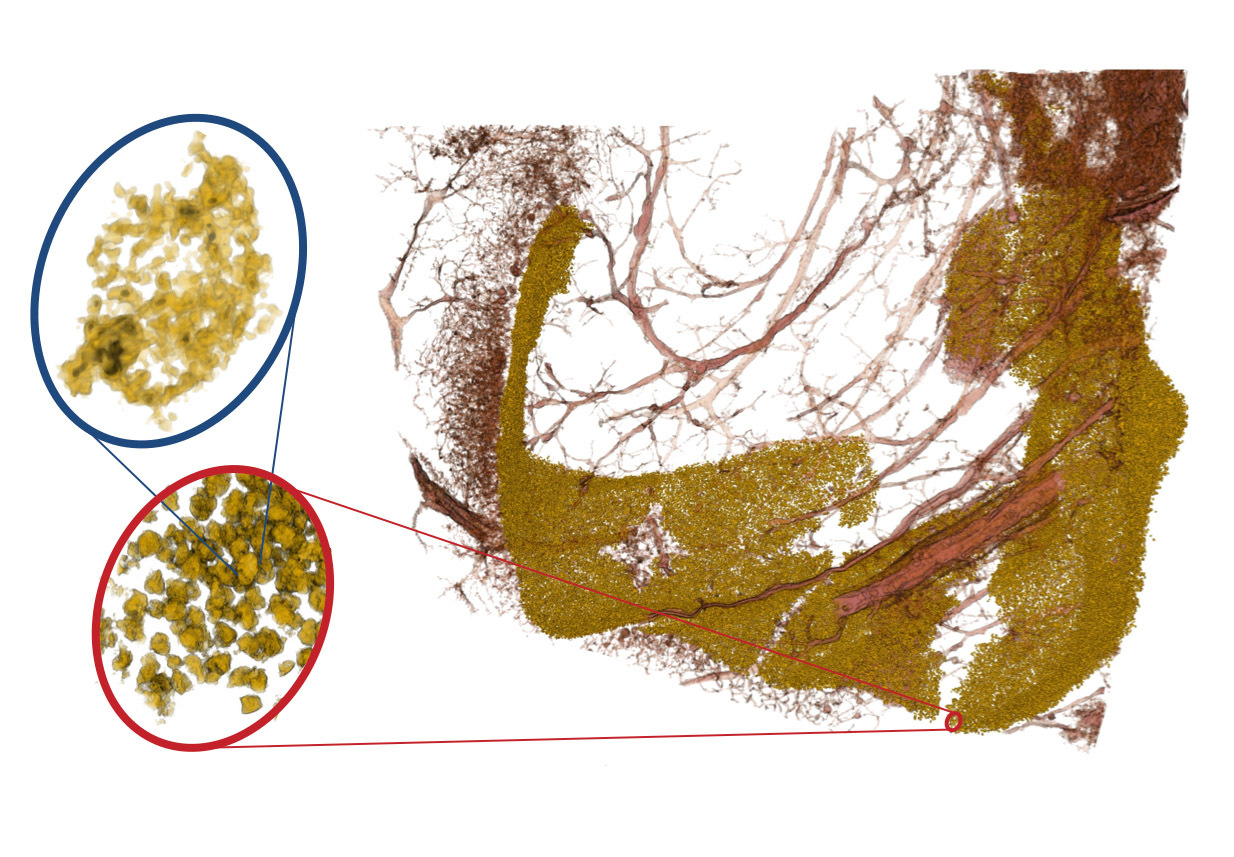 The image shows neuronal cell nuclei of the dentus gyratus (yellow) and associated blood vessels (red). By varying the magnification of the X-ray optics, one can "zoom in" on the densely packed band of neurons (in the red oval) and also resolve the substructure of the cell nucleus (blue oval). The study showed a change in the cell nucleus structure occurring in Alzheimer's disease towards a more compact and heterogeneous structure, which could be explained by a change in the packing density of the DNA. 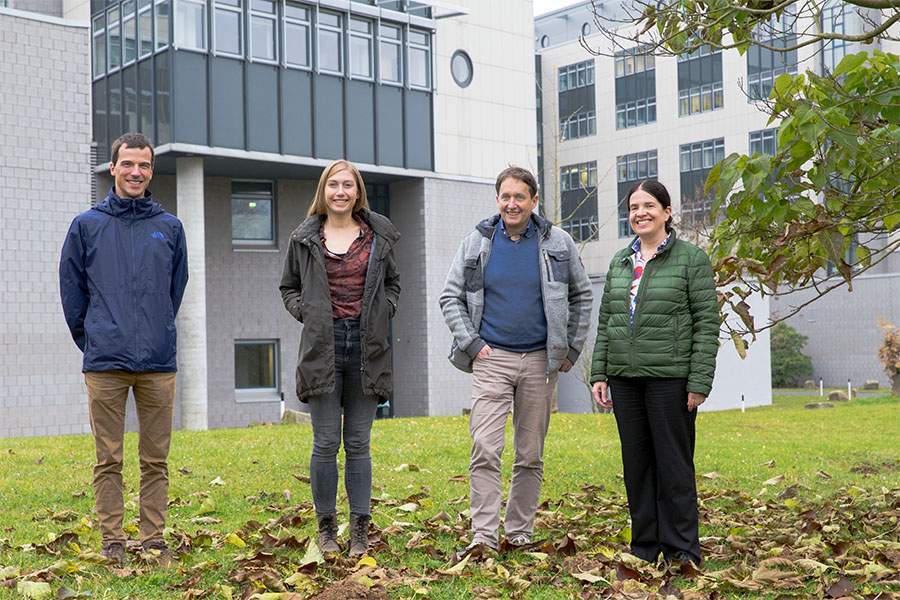