Food is a necessity because it is a basic need for human life. As such, adequate food for every person at any time is a basic human right. In the field of food policy, the problem of food meeting the needs of all residents at all times has become the main target for central and local governments. This study used the data of the National Socio economic Survey (SUSENAS) March 2008-2010 in Jambi. The model of Linier Approximation- Almost Ideal Demand System (LA-AIDS) will be used to analyse selected staple food commodities as substitutions or complementary commodities. The objectives of this study are to describe the pattern of food consumption of poor households, identify factors that influence food consumption patterns of poor households, and analyze changes in food consumption of poor households due to changes in prices, income, and socio-demographic characteristics. Based on preliminary results, patterns of consumption can be found whereby the share of food expenditure in poor households is still high, at around 72 percent in 2008, and slightly lower (71 percent) in 2010. Analysis by region shows that in rural areas, share of food expenditure is higher compared to urban areas; 81.39 percent in rural areas, compared with 75.99 percent in urban areas (2008). One of the important implications of high food consumption of the poor is the government's attention to the need for food. In addition, the phenomenon of volatility in food prices should be a concern.

There was a special seminar by Dr. Nunung Nuryartono at the University of Göttingen on
November 28, 2014.
Dr. Nuryartono talked about "Determinants of food demand in Jambi, Indonesia" 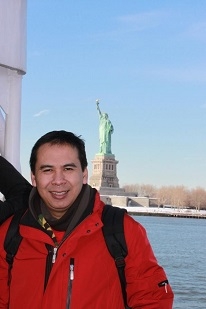