Traditionally, metaphor has been seen as a threat to the scientific maxims of accuracy, truth, and explicitness. This view ist still reflected in academic writing conventions, but has been opposed by research suggesting the metaphor ist an indispensible part of natural language. So far, most studies on metaphor in academic prose have been conducted on a small scale or restricted in their focus, investigating only small sets of metaphors, or have lacked a transparent method of metaphor identification.
The book presents a new type of metaphor research into written academic discourse. On the basis of systematic and consistent method which identified metaphorical language on a word-by-word basis, it constructs the first register profile of academic prose that takes into account metaphor. Patterns of metaphorical language use in academic prose are described in terms of lexicogrammatical forms, communicative functions, and underlying conceptual structures. A hand-annotated corpus of 190.000 words of natural language, allowed for consistent cross-register comparison with news, fiction, and conversation. The word not only approaches metaphor from a cognitive-linguistic, sociolinguistic, and discourse-analytical angle, but also from a psycholinguistic one, investigating the processing of metaphorical language in academic discourse as influenced by academic expertise and metaphor conventionality.
The research is useful for anyone interested in the study of academic discourse, metaphor in specialized discourse, and register variation in general. In addition to furthering our knowledge of the characteristics of academic discourse, its focus on methodology will bei helpful to those concerned with the methodological aspects of metaphor analysis. 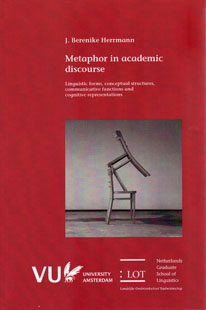