In 1748, Johann Andreas Von Segner started giving Chemistry experimental lectures at the University of Göttingen. It took over 30 years until Johann Friedrich Gmelin (1775-1804) built the first chemistry laboratory at Hospitalstraße 7, which is still there. A colleague of Gmelin, the physicist Georg Christoph Lichtenberg called such half-timbered houses, which are typical in Göttingen, "stakes with doors and windows". The laboratory was in the same building as Gmelin's appartment. It is no wonder that his son Leopold shared his passion for Chemistry, he later became a Professor of Chemistry at the University of Heidelberg and founded the famous "Gmelins Handbook of Inorganic Chemistry".

When Friedrich Wöhler came to Göttingen in 1832 he had already discovered the ?urea synthesis? this showed that there are no insurmountable barriers between Organic and Inorganic Chemistry. Wöhler and Liebig concluded that nearly all organic materials can be synthesized. Some of his discoveries are accountable to his work in Göttingen. For example, the synthesis of the benzoyl radical, the isolation of cocaine, or the generation of acetylene from calcium carbide, which has since been turned into an industrial process worldwide. Students who wanted to attend Wöhlers lectures had to be early risers: The organic introductory lecture started at 6 a.m., four times a week. Luckily, this tradition no longer remains. Victor Meyer was Wöhler?s successor, he taught from 1885 to 1889 and during this time he discovered thiophene and subsequently developed its chemistry.

Otto Wallach (1889-1915) was one of the greatest chemists of the time in Göttingen. Today he is best known for the Leukart Wallach reaction. In 1910 Wallach received the Nobel Prize, he was the first academic to receive this at the University of Göttingen. Due to the growing development of Chemistry, two new chemical Institutes were founded in Göttingen during Wallach?s time: In 1894 Walter Nernst founded the Institute of Physical Chemistry and nine years later Gustav Tammann founded the Institute of Inorganic Chemistry. However, Tammann later switched his research interest to physical chemistry, and became very successful in the area of metals and alloys. Richard Zsigmondy later took over the Institute of Inorganic Chemistry, he had worked in the industry on the development of various kinds of glass. He is the inventor of the famous Jenaer Glas. He had received the Nobel Prize in 1925 (before coming to Göttingen) for his work in the area of colloid chemistry.

Adolf Windaus succeeded Wallach from 1915-1945. Windhaus was one of the first researchers to be known as a natural product chemist. In 1928 he received the Nobel Prize for his work on steroids and vitamins.

In 1963 the Institute of Organic Chemistry moved from the old city to Windausweg. In 1975 the Institute moved to the North of Göttingen, about 4 km from the city centre. Now all three Institutes are located together.

back to information of the institute 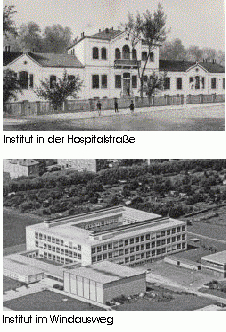