Founded in 1737, Georg-August-Universität Göttingen is a research university of international renown with strong focuses in research-led teaching. The University is distinguished by the rich diversity of its subject spectrum particularly in the humanities, its excellent facilities for the pursuit of scientific research, and the outstanding quality of the areas that define its profile. From 2007 to 2012 Georg-August-Universität Göttingen was rewarded funding from the Initiative of Excellence of the German Federal and State Governments with its institutional strategy for the future entitled “Göttingen.Tradition – Innovation – Autonomy”. The University was able to realise all measures of the concept. Now Göttingen University develops the successfully established measures further to continously advance the University’s positive developments in research and teaching.

A University with Tradition
The University bears the name of its founder Georg August, King George II of Great Britain, Elector and Duke of Brunswick-Lüneburg, (Hannover). In affinity with the spirit of the Enlightenment, Göttingen abandoned the supremacy of theology and set its faculties on an equal footing. As an academic location Göttingen was long regarded as the hub of the mathematical world – a position lost, however, in 1933 when under Nazi rule more than 50 professors and lecturers were forced to leave the University, among them several of around 45 Nobel laureates whose names are associated with the city. After the end of World War II, Göttingen University was the first in Germany to resume its teaching operations and it went on to become one the largest higher education institutions in the country.

University as a Foundation
Intensifying the process of internationalisation, promoting excellence in research and teaching, adopting Bachelor’s and Master’s degree structures, giving all levels of the University greater autonomy and self-responsibility, optimising resource allocation: These steps characterise the reforms recently undertaken at the University. At the beginning of 2003, the Georg-August-Universität became the first German university with a comprehensive range of disciplines to assume the legal status of a foundation under public law. The University has since then enhanced its research profile, created new research entities such as the Courant Research Centres and the Lichtenberg-Kolleg, intensified cooperation on the Göttingen Campus, attracted and retained outstanding academics and supported the recruitment of excellent students and young academics from abroad.

Göttingen Campus
The University of Göttingen regards its great research tradition and subject diversity as constituting particular strengths. Almost all academic disciplines including medicine are represented in the 13 faculties, the exception being engineering sciences. The Georg-August Universität is also distinguished by being closely integrated into a network of first-class extra-university research establishments involving, most prominently, the Göttingen Academy of Sciences, the German Primate Center, the German Aerospace Center and five Max Planck Institutes. Together, these local partners create with the University an alliance for collaboration in research and teaching arguably unique in the Federal Republic in terms of its depth and breadth.
Successful elements of which include jointly run collaborative research centres, junior research groups and infrastructure facilities, as well as combined professorial appointments. This cooperation has recently bred outstanding research centres that have won funding from the German Research Foundation (DFG) and the Federal Ministry for Education and Research. Within the scope of the Excellence Initiative ,the promotion of the Excellence Cluster „Nanoscale Microscopy and Molecular Physiology of the Brain (CNMPB)“ and the Göttingen Graduate School for Neurosciences; Biophysics and Molecular Biosciences (GGNB) will be continued in the second programm phase.
Due to the positive effect on student instruction and the fostering of young researchers emanating from the neuro- and biosciences in Göttingen, these research focus areas, cultivated together with the University’s institutional partners on the Göttingen campus, play an important part in shaping its profile. Research excellence at international level is also displayed in chemistry, physics of condensed matter and optics, biodiversity and ecology, geobiology and pure mathematics, as well as in German language and literature studies, oriental and ancient world studies, and theology.
As a result of the integration process of the local research community, possibilities specific to Göttingen have arisen for the attracting and retaining of excellent researchers from both in and outside Germany, and top-quality research activities have been initiated and developed. Likewise, the advancement of exceptionally talented young scholars and scientists is a central strategic aim at the Georg-August-Universität.

Studying with Excellence
Göttingen has many advantages as a location for university studies which the Georg-August-Universität is enhancing by developing innovative degree programmes, Bachelor’s and Master’s degree structures, carrying out a systematic internationalisation of its study programmes and implementing quality-assurance measures. Approximately 30 000 young people currently study here, some eleven per cent of whom are from abroad – a clear demonstration of the pull that the University has long exerted internationally. The range of degree courses on offer stands out both for the outstandingly good study facilities in the natural and life sciences and for the breadth of subject diversity in the humanities and social sciences, a choice found at only a small number of universities in Germany. Such a spectrum of subjects enables overarching issues to be tackled with an interdisciplinary perspective, even at undergraduate level. With 80 subjects to choose from, some 1,000 combinations are possible on the way to graduation with a Bachelor’s degree.
In its constantly expanding range of Master’s and Ph.D. programmes the University cultivates excellence and offers the proximity to research. Study programmes run in English, bi-national degrees and compulsory periods spent abroad prepare graduates for the international job market. The University of Göttingen’s international position is being further strengthened by the expansion of partnerships. In addition to the close complex of European universities within the framework of the Erasmus Programme, numerous cooperations at University, faculty and institute level facilitate study visits throughout the world, in some case also making scholarships available.
In 2011 the University of Göttingen was successful with its proposals to further improve the quality of studies and teaching within the framework of the “Quality in Teaching Pact“ of the German federal and state governments. Since then, Göttingen University has been expanding the academic programmes it offers and further optimising the quality of study conditions. These measures will be developed in cooperation with students.

Fostering the Scientists and Scholars of Tomorrow
Doctoral training in Göttingen is concentrated in structured programmes based at four Graduate Schools: Georg August University School of Science (GAUSS) – Göttinger Graduiertenschule Gesellschaftswissenschaften (GGG) – Graduiertenschule für Geisteswissenschaften Göttingen (GSGG) – Graduate School Forest and Agricultural Sciences (GFA) (see: www.graduiertenschulen.uni-goettingen.de). The four Graduate Schools provide the organisational superstructure for the research training groups, doctoral programmes and International Max-Planck Research Schools. The aim of these schools is to optimise the research- and learning-conditions for doctoral candidates, offering intensive supervision and a range of seminars designed to advance the training of first-class scientists and scholars.The Göttingen Graduate School of Neuroscience, Biophysics and Molecular Biosciences, which operates under the roof of the Georg August University School of Science (GAUSS), gets funds within the Excellence Initiative since 2007. Funded by the German Research Foundation, Research Training Groups (GRK) are set up for a limited period with the aim of promoting young researchers and preparing them for their doctorate. At the International Max Planck Research Schools, the Max-Planck-Gesellschaft in collaboration with partners at the University is engaged in fostering young scientists and offers especially gifted students from Germany and abroad the opportunity to obtain a doctorate of special distinction.

A World-Class University Library
The founding of the Göttingen University Library in 1734 was a landmark: For the first time in library history the concept of a modern research library was put into practice and the institution became the first comprehensive academic library of European standing. Today, the Göttingen State and University Library of Lower Saxony (Niedersächsische Staats- und Universitätsbibliothek Göttingen, SUB) continues to hold a pole position. With over 7.8 million medial units, it is currently one of Germany´s largest libraries. The holdings include 5.8 million volumes, 1.5 million microforms, 34,000 electronic magazines under licence, 321.000 maps, 14,000 periodicals in print form, 14,000 manuscripts, more than 3,100 incunabula, 400 bequests and a host of digital items. In addition, there are another 138 independent branch libraries at the institutes and departments. A digital library competence centre of worldwide renown, the SUB directs or participates in numerous research and development projects in this domain. 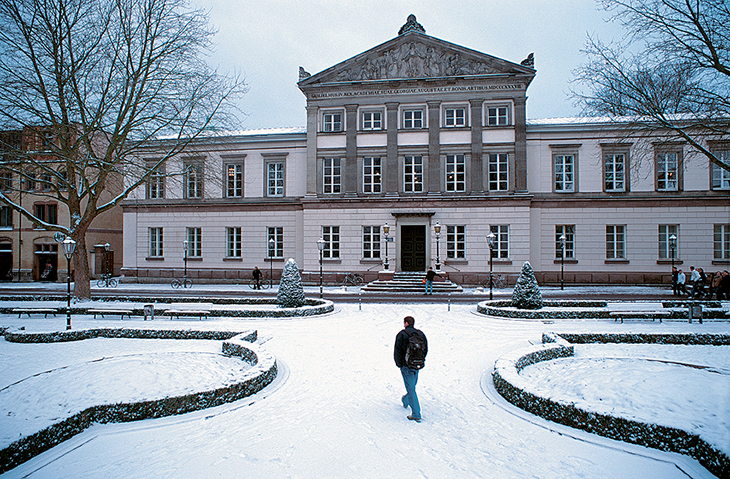