“Fate leads the willing, and drags along the reluctant.” That is how Seneca characterises the double face under which people experience the power of fate. According to his judgement, it depends on the man alone whether he lives wisely and willingly in the world order settled by fate, or whether he rebels against it, thinking evil of gods rather than striving for understanding the necessity. In this stoical view, divine providence cannot be distinguished from fate; divine power, which rationally rules over the world within a large causality, becomes manifest in both of them.

This elaborated Stoa system enjoyed success both in its acceptance and in its rejection. Insignificant relicts contain elements which could be followed till the ideologies of the 19th and 20th centuries. However, the public lecture series only dealt with the interrelation between providence, fate and divine power in the world of Classical and Late Antiquity. The objective was thereby to hold the “distant mirror” of ancient conceptions and disputes before the later reception processes. The ideas developed in Mesopotamia, Egypt and Iran and the monotheistic religions were considered to the same extent. Their particular representations of God can hardly be combined with an overwhelming fate, because it extremely narrows down man’s freedom and responsibility, if not excludes it entirely. Islam was also part of revealing debates, taking into account the fact that the Islamic view has to be distinguished from the European clichés of the 19th century. The specific presentations were supported by lectures which basically treated the topic from the perspective of religious studies and that of philosophy of religions.

This public lecture series was organised by the Research Training Group Götterbilder – Gottesbilder – Weltbilder. Polytheismus und Monotheismus in der Welt der Antike (Images of Deities – Images of God – Images of the World. Polytheism and Monotheism in the Ancient World). The Research Training Group opened herewith its second funding period, which focused upon personal and apersonal images of God. Almost all contributors were members of the Research Training Group and the lecture series introduced them to the public in Göttingen. In addition to that they contributed to the “Year of Humanities 2007”, which explicitly proves that the interdisciplinary work has a larger cognition capability than a particular specialized discourse. 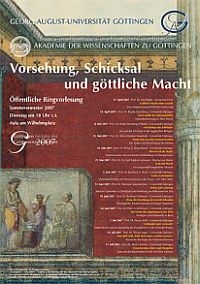