Studies on past climate and vegetation dynamics can help anticipating possible changes due to global warming over the next century. However, the available palaeoecological investigations in South America often cluster around a few locations, leaving extensive areas without or with limited palaeoenvironmental information.
This research is carried out in an area where currently the distribution of important arboreal taxa (Nothofagus species, Araucaria araucana and Austrocedrus chilensis) converges, in the transition zone between cool temperate forest and woodland and the Patagonian steppe. In this strategic position changes in the presence and abundance of arboreal taxa reveal aspects of the postglacial climate history, while providing new information on the occurrence and abundance changes of Araucaria araucana and Austrocedrus chilensis during the Holocene in north-western Patagonian Andes. Climate is not the only factor influencing the dynamics of vegetation. Vegetation changes observed in the fossil record may also be attributed to a range of environmental factors (volcanic eruptions, fire and human activities) and ecological processes (migration, succession, competition).

The Andean Cordillera of southern South America is a critical region that allows us to evaluate the role of the factors that influence changes in vegetation because:

Specific objectives are to determine:

Currently two sediment records have been recovered at Piedra Pintada, on the eastern part of the Ñorquinco valley (39 degrees South). The 8m long sequences recovered span the complete Holocene period. Pollen and charcoal analysis are in progress.

This PhD Project is in cooperation with Dr. Thomas Giesecke

Funded by CONICET, the National Scientific and Technical Research Council of Argentina: 2016-2021 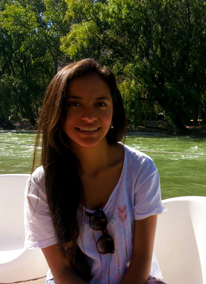 based at the Museum of Natural History in San Rafael, Mendoza, Argentina
Contact
e-mail